Trump vs. Carson: Dawn of... Something

What do the two GOP leaders have in common, asks Todd Seavey? 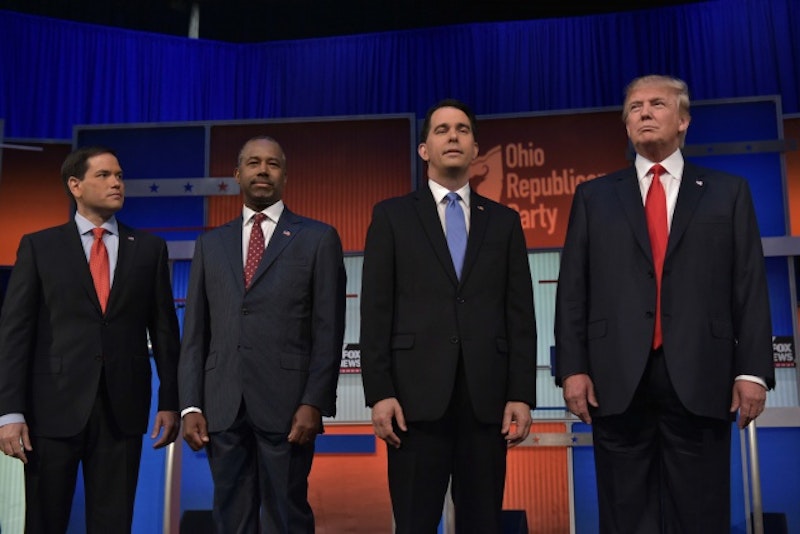 Like a living, two-person focus group of average Americans who might vote Republican (but don’t always), my parents tell me they like Trump and Carson. And they don’t have much to say about any other candidates. Obviously, I wouldn’t have predicted this a year ago, but it jibes with polls showing those two pulling way ahead of the rest of the Republican pack, all of whom are down in single digits.

The easy answer to the question “So why these two?” is that they raised me and so I could hardly abandon them. But you want to know why Trump and Carson. The easy answer there is “populism,” but it’s worth noting how powerful this populism must be if it inspires people even when manifesting in such varied and vague forms. I mean, consider the differences in temperament, volume, etiquette, philosophy, favorite issues, and ethnicity that would seem to most elite analysts to separate the two men.

And my parents were briefly Perot fans 23 years ago, so they fit the “populist” profile, but what part of populism appeals exactly? They don’t have a history of being particularly anti-Mexican. And Carson’s rise would seem to confound the increasingly shrill insistence on the left that conservatives, possibly Americans in general, are motivated primarily by “white supremacism,” which is the new label for virtually everything the left dislikes, a label that will have to be pasted right over the “white privilege” label from just last year that is now apparently not damning enough.

The left is so in love with leveling accusations of racism that they’ll condescendingly accuse Republican-leaning voters of keeping someone like Carson around just as a token, but that would take either some very Machiavellian forethought on the part of survey respondents or a strange desire to buff their PC credentials even while openly loving the loud anti-PC guy. Seems complicated as an explanation, unless you’re hell-bent on finding sinister motives, which is not usually the best mode of analysis.

So I went ahead and asked my parents how they could like the loudmouth and the soft-spoken doctor at the same time. What is it that they have in common exactly? What makes them the populists? And my parents said something that gives me hope this nation could still end up libertarian. They said Trump and Carson are the only two who don’t sound like politicians who already work for the government.

They’re right, you know. And not just rhetorically. All the other candidates have worked for or closely with government (even Fiorina, who has worked for the CIA and RNC, a combo that Jeb Bush must admire). My parents had kept better track of that distinction, just from noticing tone, than I had, and I’m supposedly the only member of the family who actually wants to get rid of the government.

If my purportedly anti-government brethren among the conservatives and libertarians and I were remotely competent, we’d understand how to harness this kind of populism—anti-government, anti-politician populism—more easily than any other imaginable kind. But in our government-focused society, even the conservatives and libertarians end up sounding like government people—and those of us professionally involved in politics and media internalize our oppression and come to believe that outsiders to the system are impossible or sound hopelessly kooky (as they sometimes are). And, self-hating, we mimic Washingtonian voices.

Yet now the two leading Republicans are men who weren’t even Republicans four years ago. Perhaps in a year and a half they’ll be a president and v.p. who’ve never before held political office. It certainly wasn’t my Plan A, but I admit it’s what you might call an aspirational story.