Each now seems less important and funny to Todd Seavey. 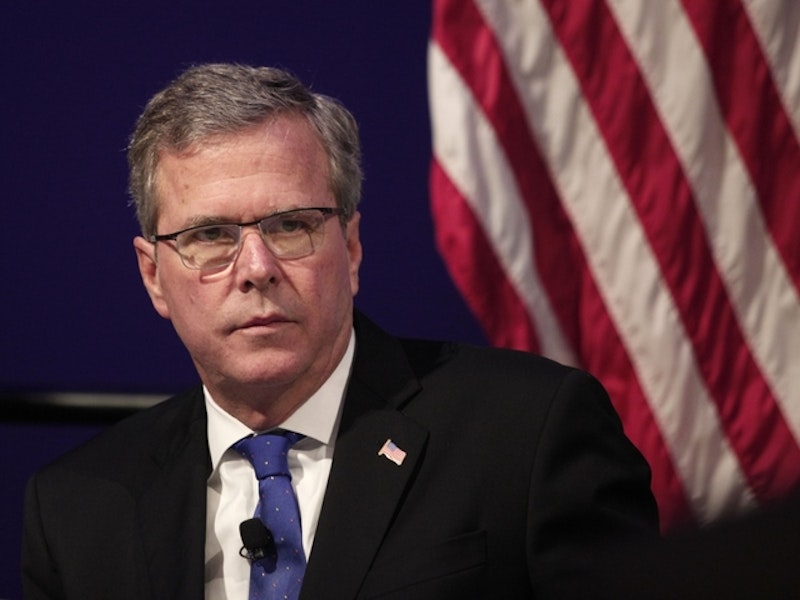 Tonight will bring Jeb Bush to the set of The Late Show with Stephen Colbert, as the formerly significant-seeming faux-conservative is presented to the world in somewhat tamed form. I’m not sure which of them I’m talking about either.

Perhaps, not so long ago, you thought seeing Jeb would make for a sharp contrast with his brother or father. Perhaps you also thought it would be jarring to see Stephen Colbert being himself instead of portraying a fictional pundit by the same name. Maybe you even thought seeing Colbert’s re-launch tonight would make you miss David Letterman anew.

Those all seem like hairsplitting concerns from a lost, ancient world now. We live in the Trump Era.

Is Bush a neoconservative? A conventional, mainstream conservative? A mere moderate? Does he have any libertarian leanings or, by contrast, theocratic tendencies? Look at all those old-fashioned words I used that people used to care about! In the face of the Trump juggernaut, all the old philosophical concerns seem like debates over angels on a pinhead to me now.

I think I recall “hating” David Brooks and Howard Dean once, long ago, but now that all seems like complaining about slow table service at Olive Garden during a massive cometary impact. Beneath the skin, are we not all siblings from the Time Before Trump, whatever our minor ideological differences, like once-rivalrous anthropologists now captured by the same cannibal raiding party, or perhaps feuding in-laws taken hostage en masse during a bank heist?

Even the conspiracy theorists may find themselves confounded. Do the Bush family ties to the CIA really matter as much for determining our fates now as Trump’s “Make America Great Again” hat does? Are you sure?

How serious both Bush and Colbert are now bound to seem. How quiet and polite both men are, really, in the context of the new era. How down to earth and non-threatening.

Trump yells. Worryingly, I can’t help noticing Bernie Sanders—unlike that droning Hillary Clinton person from long ago—yells a lot, too. Are Trump and Sanders thus our 2016 destiny? Will these be the noisy Scylla and Charybdis for a numbed electorate who can no longer hear mumbly conventional politicians (or TV hosts) above the bellowing, tweeting, and occasional bursts of dubstep? Oh, how I hate dubstep! But maybe that doesn’t matter anymore either.

But an even stranger thought crosses my mind: If, now more than ever, grabbing attention matters more than sane policy details, I wonder if millions of Democrats will watch The Late Show’s other guest tonight and think, “You know, we could run Clooney.”