The Bushes Have Learned Nothing, Forgotten Plenty

Let Jeb explain the Middle East to you. 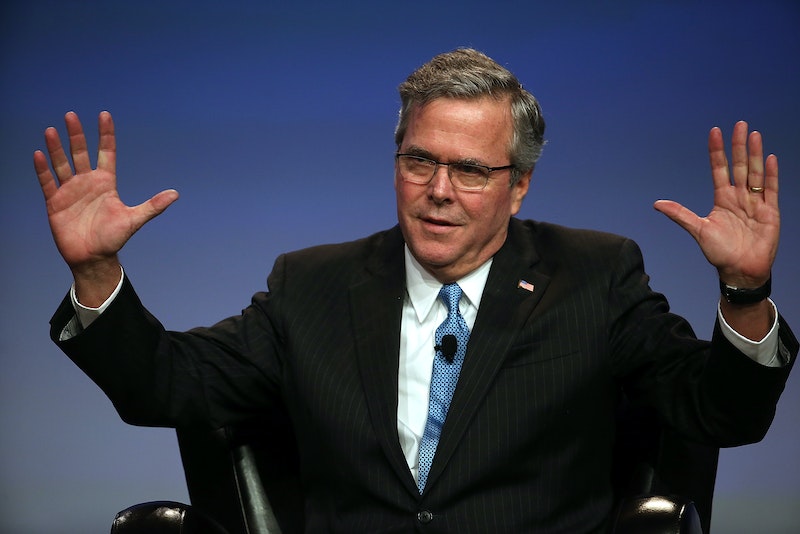 What does the Republican front- runner think of the Iraq War? “It was a disaster,” says Donald Trump. Now here's Jeb Bush: “No leader or policymaker involved will claim to have gotten everything right in the region, Iraq especially.” A nice way to talk when you've got a smoking crater behind you. Jeb then tells his audience of important people—they're gathered at the Reagan Library—that America ought to get deeper into Iraq and stay that way, apparently because of ISIS.

“Who can seriously argue that America and our friends are safer today than in 2009?” Jeb asks. This follows 11 paragraphs in which he doesn't demonstrate that we are any less safe. He tries hard, though, and in familiar Bush ways. For example, “throughout Africa.” In the old days, George W. Bush's people would say Saddam and al-Qaeda had contacts “going back” x number of years. There had been a couple of contacts within that number of years, but “going back” made it sound like a relationship, like that period of years was solid with contacts. “Throughout” works the same kind of trick on geography. Boko Haram here, Al-Shabaab there, a big patch controlled by AQIM in the Sahara, and we get radical Islam, “spreading like a pandemic” until it has found its way “throughout Africa.” A whole continent, gone because of a preposition. Jeb also warns us that radical Islam is in “parts of Asia, even in the nations of the West, finding recruits in Europe and the United States.” Wasn't it before?

In telling us how the Islamist threat has worsened under Obama, Jeb comes up with two items. First, now we have social media and it's used by terrorists. What should be done about this that isn't being done now? Jeb's ready. “We need to work with the owners of the relevant companies, and give careful thought to how we address this problem,” he says. Second, we have ISIS. Jeb takes for granted that ISIS wants to hit us in the West. “The Islamic State and its followers are an asymmetric threat—needing just one big strike to inflict devastation,” he tells us. “What we are facing in ISIS and its ideology is, to borrow a phrase, the focus of evil in the modern world.”

Like everybody, Jeb knows that ISIS is very bad. He figures that's the same as a menacing thing, apparently the most menacing thing anywhere—the “focus of evil.” Guess what? Five paragraphs later he's telling us Iran is the big problem. “Whenever bad things happen in the Middle East, from Israel's borders to the shores of Yemen, the influence of the mullahs is rarely far from the scene,” Jeb says. If Iran is that awful and powerful, ISIS can't be the world's focus of evil. Maybe ISIS is just bad, a nasty heap of a Mad Max pseudo-state with a force easily bigger and meaner than the Indiana National Guard. As for Iran, not far from Israel and Yemen you can find Iraq, where the mullahs have been fighting the focus of evil (or fighting the Mad Max heap, as I prefer to put it).

Finally, Jeb analyzes the President's agreement with Iran. He notes indignantly that this agreement regarding a nuclear program is an agreement regarding a nuclear program, not a vehicle for making Iran a better country. Then he gets technical and strips it down. He does it in two sentences. “And least of all,” he says, “does it prevent Iran from acquiring a nuclear weapons capability. In fact the deal prepares the way for that capability.” Those are the sentences. Next: “With the lifting of sanctions, the deal also frees up,” etc.

An agreement to control nukes somehow promotes them. That is some story.  Explain, please. What's the provision that backfired? Jeb never tells us. But he wants U.S. soldiers to be embedded in Iraqi units, and he wants the U.S. to hold together Iraq's government “for the long haul.” He also wants the U.S. to put together a government for Syria and keep that one going too. He doesn't say what we should do about Iran's nuclear program.

He does tell us we need “the Reagan spirit,” which means “rejecting with contempt the idea that conflict must be endless, or that the spread of danger and violence is inevitable.” I like that, given the mujahedeen. I like hearing a member of the Bush family explain about asymmetric threats and about terrorists “needing just one big strike to inflict devastation.” Hearing a Bush talk about that may have been the most remarkable thing in the speech, and I doubt Jeb Bush knows why.