Walker’s a Top-Tier Candidate. Now What? 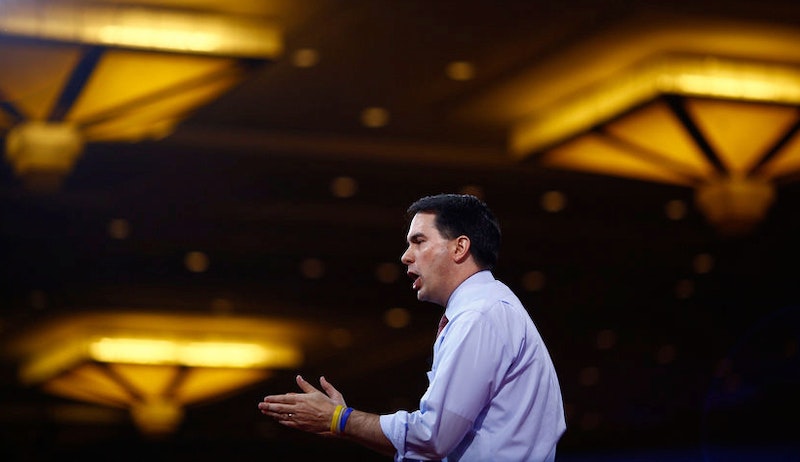 So far this year, in the conservative press, The Wall Street Journal’s Daniel Henninger stands alone in recognizing that while the Republican presidential free-for-all is entertaining, at least in the early going not a single candidate has articulated a coherent strategy to resuscitate the United States once Barack Obama’s tenure mercifully ends. Henninger wrote on Thursday that there’s “something a little off about the Republican presidential conversation right now… What one sees is mainly money and marketing. When does that stop and something more identifiably presidential begin?” There have been other junctures in American history when a presidential election is more important than others—1979 comes to mind, when Jimmy Carter was gasping in White House quicksand—but in the modern era, when politics is marginalized by the mass media’s scoop-a-minute obsession, the consequences of who replaces Obama is largely lost. No matter who wins, pundits and reporters, after a brief intermission for handicapping Cabinet posts in December, 2016, will then hunker down for the 2018 midterms.

It’s likely Henninger is seen as a killjoy, what with the CPAC gathering taking place, twice-weekly polls showing who’s up and down, and the absurd attention given to has-been Rudy Giuliani’s dumb comments about Obama’s lack of patriotism so much easier to chew over than, say, the impossibility of meeting Social Security demands under the current sclerotic system (why the retirement age hasn’t been raised two years is beyond me, and was 15 years ago). Henninger continues that almost all the GOP candidates—in contrast to Hillary Clinton—“couldn’t name three people they’d bring into an administration today.” He says that Jeb Bush has mentioned the names of possible foreign-policy advisers, but at least to me, they’re mostly re-treads from his father and brother’s presidencies, which isn’t a great selling point. James Baker? Isn’t he about 110?

In fairness, it’s easy for partisans of both sides to get caught up in the primary/general election carnival, and I’m certainly guilty of that. I wrote on Feb. 11 that Wisconsin’s Gov. Scott Walker is the GOP’s most formidable candidate—if he survives the smears and legitimate inquiries the media will slash him with—mostly because in contrast to Clinton he’s a middle-class Midwesterner who doesn’t pay lip-service to big issues while eating canapés at Davos. And, as someone who doesn’t want Clinton Redux, the first order of business is identifying a Republican who can defeat the International Hillary Machine. It’s possible Walker can do that—unlike Bush, Rand Paul or God help us, Ted Cruz—but he still needs polish and to learn the definition of the word “nuance.” We know he’s an enemy of unions, a major plus, and a budget hawk. But he’s hazy on foreign policy—and won’t get a pass on that for long—has waffled on immigration and hasn’t presented a comprehensive platform on tax reform. It’s true that Walker hasn’t even officially declared his candidacy, but the rules have changed from when Bill Clinton ran in ’92 and was able to get by with vague ideas.

Henninger outlines the urgency: “The task that Barack Obama is dumping on the next U.S. president, of either party, is overwhelming. Here’s the job description: Needed, a U.S. president able to confront a world in chaos, rebuild shattered alliances, revive the country’s demoralized intelligence services and senior officer corps, manage foreign and domestic demands with a budget that will be drained for years by fantastically expensive debt servicing…” Mind you, Henninger’s no Hillary fan, ridiculing her promise to “crack every last glass ceiling” as an issue that “dates back to… 1984. It may be even older than ‘income inequality.’”

Walker took some heat Thursday for comparing angry protesters in Wisconsin to ISIS, a snippet of hyperbole—although it shouldn’t be lost on voters that the Governor has, unlike the other contenders, battled through three vicious elections in four years, at least proving his resolve—that one would assume advisers will counsel against. He doesn’t have to be an immediate expert on foreign policy—the bar is low by Obama standards—but can’t be ridiculous. A six-day trip to the Mideast, with as little fanfare and no press conferences, makes sense.

The best course for Walker, even in the spring of 2015, is to release a concrete set of policy positions: I’d like to see him advocate a flat tax, but failing that, an explanation of simplifying the tax code, eliminating loopholes for corporations and the extremely wealthy (it’s not like conservative men and women in business will bolt for Hillary; they’ll adapt), and relief for the middle class. He needn’t dwell on immigration—it’s not high on the list of voter concerns—but ought to distance himself from the Party’s xenophobes. Walker’s an evangelical Christian, but in reaching for centrist voters, it’s better to keep that in the background, and leave moral issues to Rick Santorum. And while it’s a stretch, Walker could break out of character and take at least a modified stance on marijuana legalization, saying that it’s up to individual states to make that decision.

Walker’s smart to follow Reagan’s fabled “11th Commandment” of not gratuitously attacking fellow Republicans, which might help him in the debates, and, if he survives the initial cut, bring early drop-outs into his camp.