Graeme Wood takes a look in The Atlantic. 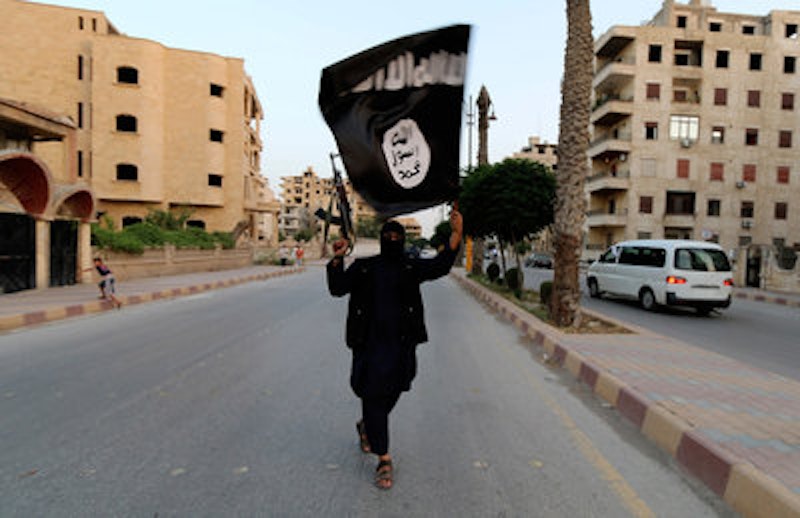 What is ISIS like? Well, says Graeme Wood, imagine if “David Koresh or Jim Jones survived to wield absolute power over not just a few hundred people, but some eight million.” What we have, basically, is a crazy cult, and it's sitting on the crotch of the Middle East, the top half of where Iraq ought to be. I'll add this thought: the cult got its chance because of the U.S. If the U.S. did to itself what it did to Iraq, a Koresh successor might be sitting atop Nevada, Utah and some slave camps. Luckily America saves its big efforts for abroad.

Back to Graeme Wood, who discusses the menace of the ISIS cult-state in The Atlantic. His article is called “What ISIS Really Wants.” He knows as well as anybody, I guess. “I picked through every spoken or written word in search of signals of what ISIS cares about and how its members justify their violence,” he writes in his follow-up piece. “I also asked a small group of its most doctrinaire overseas supporters for guidance, and they obliged.” Wood describes ISIS as a “hermit kingdom,” and he's pecking for information at its fringes. Searching carefully and talking to experts. Others have done this, no doubt: CIA analysts, people who feed info to the President. They haven't been confident in what they have to say, but Wood takes a stronger note.

“We have misunderstood the nature of the Islamic State in at least two ways,” he says. First, we expect it to be like al-Qaeda. Second, we keep saying that ISIS is too crazy to be part of Islam. Wood's view: ISIS is both its own, very strange thing and completely a part of Islam.

Not al-Qaeda. Wood describes an ISIS video about the group's history: “It acknowledged Abu Musa’b al Zarqawi, the brutal head of al-Qaeda in Iraq from roughly 2003 until his killing in 2006,” as a progenitor of the group, “followed sequentially by two other guerrilla leaders” before its current regime. “Notably unmentioned: bin Laden’s successor, Ayman al Zawahiri, the owlish Egyptian eye surgeon who currently heads al-Qaeda.” ISIS thinks al-Qaeda is a waste of time. Al-Qaeda wants to keep hanging in there, a bee in America's face, until a few generations go by and the monster has stumbled itself into oblivion. At that point the way will be open to a caliphate. This is the long game, the painful adjustment of geopolitical balance by limited means. Meanwhile, ISIS says it started the caliphate on June 29 of last year and that the rest is countdown. The group considers itself, to quote Wood, the “headline player in the imminent end of the world.”

We expect our enemy to be a shadowy organization that threads from country to country. Instead there's ISIS, squatting in the desert and yelling. It's not interested in launching attacks on the West—Wood notes footage of ISIS recruits happily burning their old passports, for terrorists an act like burning handfuls of thousand-dollar bills. The group kills Westerners because it wants to goad the U.S.—or possibly any Western power, even Turkey—into sending ground troops. ISIS exists to fulfill a prophecy, and the Western invasion will be stage one of the prophecy. (ISIS has captured a city called Dabiq, in Syria, because that's foretold as the site of the battle.)

Following the invaders' defeat, the caliphate will enjoy rule over a vast domain, possibly the world, before facing a mysterious figure called Daikal. This being will arise “from the Khorasan region of eastern Iran,” Wood tells us, and he will drive the believers to their knees. But at the end Jesus rides in with a spear and the faithful live in splendor.

That's the plan. For it to happen, presumably, ISIS has to be the caliphate; otherwise nothing will be triggered. But Wood doesn't spell this out. Another point that isn't spelled out: being the caliphate seems to hinge on applying holy law to the extreme, no holds barred. Some other conditions apply, such as the leader's parentage in the right tribe, but enforcing the law is the ongoing project. A Calvinist had to make money so God wouldn't lose interest in him. ISIS has to shoot people in stadiums.

Wood does spell out that, because it's the caliphate, ISIS believes that it is God's only recognized government, that all Muslims owe it allegiance, and that more and more of the earth must be brought under its rule. By law the caliph must launch wars of jihad once a year. No lasting boundaries can be set for the caliphate, no treaty can last longer than 10 years. Christians in captured nations are to be subdued by crucifixion and slavery. Muslims will be executed for a long list of missteps, any of which ISIS counts as grounds for drumming out of the faith. Wood: “These include, in certain cases, selling alcohol or drugs, wearing Western clothes or shaving one’s beard, voting in an election—even for a Muslim candidate—and being lax about calling other people apostates.” That's Sunnis. All Shiites are apostate, and marked for death, because by definition they don't recognize authority's true line of descent from the Prophet. Wood says “social-media posts” from the group's conquered territory “suggest that individual executions happen more or less continually, and mass executions every few weeks.”

How Islamic? President Obama and other kind hearts have stressed that ISIS is not Islamic. Wood thinks they shouldn't. “The religion preached by its most ardent followers derives from coherent and even learned interpretations of Islam,” he writes. Pretending otherwise, he says, will be taken as bad faith by the very people who might turn militant. Wood suspects that “most Muslims appreciated Obama’s sentiment: the President was standing with them against both Baghdadi [the leader of ISIS] and non-Muslim chauvinists trying to implicate them in crimes. But most Muslims aren’t susceptible to joining jihad. The ones who are susceptible will only have had their suspicions confirmed: the United States lies about religion to serve its purposes.”

This last point has been taken as a club for conservatives to hit Obama, and as reason for Muslim readers to get angry at Wood. Haroon Moghul writes in Salon about “The Atlantic's Big Islam Lie: What Muslims Really Believe About ISIS,” with a subhead that describes Wood's article as trolling. “It’s beyond a stretch to argue that ISIS represents Islam, is grounded in Islam, or [is] justified by Islam,” Moghul declares, and he says the relationship of ISIS to Islam “is like Frankenstein to a human being, or a zombie to a living person.” Oddly, Wood says much the same. Not that ISIS has no connection with Islam, but that the group is so “distinctive” that it can't be understood the way other Islamic bodies are: “Its rise to power is less like the triumph of the Muslim Brotherhood in Egypt (a group whose leaders the Islamic State considers apostates) than like the realization of a dystopian alternate reality in which David Koresh or Jim Jones survived to wield absolute power over not just a few hundred people, but some eight million.” Here we have the Koresh parallel. ISIS as a Koresh version of Islam doesn't seem that different from ISIS as a zombie.

But Wood insists that “the Islamic State is Islamic. Very Islamic.” A Brookings Institution fellow named J.M. Berger responds, “The Ku Klux Klan is also white. Very white.” Of course, whites can afford to admit that the Klan is white; after all, most people in the West are white, and they don't think some crazy sectarian group proves anything big about their identity. Muslims are in a dicier situation. Many people in the West assume that the typical Muslim will someday blow up a train station. Now here's Graeme Wood with his article. Professor Mohammed Fadel, an expert in Islamic law at the University of Toronto, tells Think Progress that arguments like Wood's “entertain the notion that all Muslims are just one literal reading away from becoming terrorists.”

None of which means that Wood is wrong about ISIS being Islamic. He might be wrong about how ISIS derived itself from its parent. He suggests the process was all close reading, fundamentalism. “Muslims can say that slavery is not legitimate now, and that crucifixion is wrong at this historical juncture,” he writes. “Many say precisely this. But they cannot condemn slavery or crucifixion outright without contradicting the Koran and the example of the Prophet.” His critics say Islam goes in for a lot more interpretation than that. To paraphrase, the idea seems to be that Muslims do their picking and choosing like anyone else.

Even ISIS. Wood makes it sound like the cult is taking Islam back to its first, non-Xeroxed, un-smudged original. His critics say no. As Think Progress puts it, a Koran verse “connects the permission for war with the need to protect the houses of worship of other religions,” and yet ISIS goes ahead and destroys churches. “ISIS exegetes these verses away,” says Professor Jerusha Lamptey of Union Theological Seminary. Another critic says Wood is wrong about which century ISIS prefers. Wood puts a lot of stress on ISIS as being Salafist, meaning that it wants life to be lived as in the days of Mohammed and his first followers. He sees the organization's goal as “returning civilization to a seventh-century legal environment.” The critic (a blogger named Cyberfitna, cited by Wood in his follow-up piece) says ISIS follows a pattern from much later on, the 13th century.

This was the time of the Mongol invasions, and Islam went through some distortions as the conquerors plunged down on the faithful. One change, apparently, was a “rigorous concern for jurisprudence,” an attitude followed by ISIS. And a man arose named Ibn Taymiyyah, who practiced a “total war approach to the Mongols.” ISIS admires him, the blogger says, but al-Qaeda's chief ideologue considers the figure a little drastic as a role model. The blogger warns that, “When even crazy people like al-Maqdisi accuse IS of cherry-picking Ibn Taymiyyah at the expense of the actions of the Prophet, we should be wary.”

Simple lesson. The blogger doesn't explain why Salafists could follow 13th-century guides and remain Salafists. We might also wonder how a “rigorous concern for jurisprudence” is different from a fundamentalist reading of the law. Maybe ISIS drops out the parts of holy text that it doesn't like and is literal about the rest. Of course, if we had answers to these questions, we don't know if the answers would make sense. That's the basic principle for understanding magazine treatments of Islam. Just as Wood doesn't know much about ISIS, most of his readers don't know much about Muslims. We are trading on scraps and making guesses.

Wood is bemused by people who say conditions, and not theology, have to be the main drivers of the ISIS phenomenon. His view: we don't know enough to say. Not about ISIS, I suppose. But we know that Nixon bombed Cambodia flat and then the Khmer Rouge took over. ISIS appeared after Bush knocked down Iraq and let the rubble get pissed on. Experts on Marxism or Islam can tell us more, but in each case we know the U.S. destroyed a country and something very bad came out of it. That's a lesson to be kept in mind. Simple, yes, but apparently that's our level.