Watching the footage from Buenos Aires, 1982. 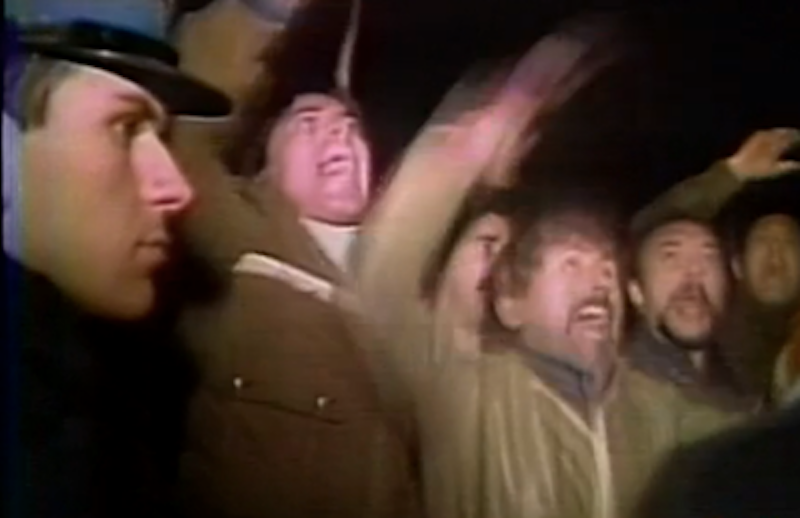 There's one guy who looks like one of the Monkees, with black hair in bangs, and he's hopping up and down—rhythmically, compactly (because he's small). His oval face is all defiance; he looks the riot police in the eyes as he rises and falls. He's at the lip of the crowd, a yard or so from the policemen's faces.

Another shot: riot policemen striding about, looking like Inspector Clouseau because of their hats. One looms before the camera, breaking away rather petulantly from some situation to swing his shoulder and march into the murk and the milling around.

The policemen load big guns to their shoulders and fire as the crowd runs back. But what comes out of the guns looks like colored plumes with sparklers. Everyone is running into the night, but nobody is falling over. The announcer (stately): “... then with guns that fired tear gas and plastic bullets, the police opened fire.”

Bill O'Reilly in 2008: ”The Argentine troops shoot the people down in the street. They’re shooting them down. It’s not like rubber bullets or gas, people are dying alright. It’s unbelievable, I mean people are just falling, ‘bing, bing, bing, bing.'”

The historian Federico G. Lorenz, an Argentine: “As far as I know, there were no people killed at the protests after the news of the Argentine surrendering arrived to [Buenos Aires]. There were incidents at May Square... and people slightly injured due to gasses and anti-riot munition, but not dead people.”

Manny Alvarez, a CBS cameraman who covered the Buenos Aires disturbances:  “People being mowed down? Where was that? That would have been great footage. That would have turned into the story.”

Dan Rather interviews some respected fellow, an Argentine. Everyone's sideburns are fluffy. The plausible foreign chap lounges about in his three-piece and says the U.S. is fucked in Argentina. To believe O'Reilly, CBS decided to show this instead of civilians getting shot.

Defending himself, O'Reilly reads out a New York Times clip that says a policeman drew a pistol and fired real bullets. O'Reilly omits the end of the sentence: “over the heads of fleeing demonstrators.” So witnessing “carnage” in a “combat situation” has become a policeman firing a single gun in such a way that nobody would get hit.

Richard Meislin, author of the Times clip: “As far as I know, no demonstrators were shot or killed by police in Buenos Aires that night. What I saw on the streets that night was a demonstration—passionate, chaotic and memorable—but it would be hard to confuse it with being in a war zone.”

Bill O'Reilly, 2001: “I've reported on the ground in active war zones from El Salvador to the Falklands.” By “the Falklands,” he meant the disturbances in Buenos Aires.

O'Reilly shows his CBS footage and says he's right: “I reported accurately the violence was horrific.”

Obviously he's full of it. Most people knew that already, but I like seeing the details. The footage of the black-banged man is really worthwhile. The Daily Show might single it out for debunking the “combat situation.” Even so, the bit has dignity on its own merits. The man was angry and showing it to armed police from a near distance—you try that.

O'Reilly lived through a drama in Buenos Aires. From what I hear, that's covering the news. Other reporters and cameramen did the same, in that place or worse. The drama turned into O'Reilly's active war zone because O'Reilly's the sort to say that an iguana is a crocodile is a dragon. His is an offbeat psychology. He has a story that swells, and the swelling pops buttons, and the buttons are facts that fly away. He doesn't push them aside, they just pop. For most people, lying is a decision. For him it's autonomic, something that helps the blood pulse and the breath move. He's healthy because of it. Deciding to drop the key phrase that proves him wrong—that's a twitch of muscle. His life is communicating, so he gets to the core: somebody in a uniform fired a gun and bullets came out. He's pared away the crud.

We have what counts, the bit where he's right.