Because he's a terrible mayor. 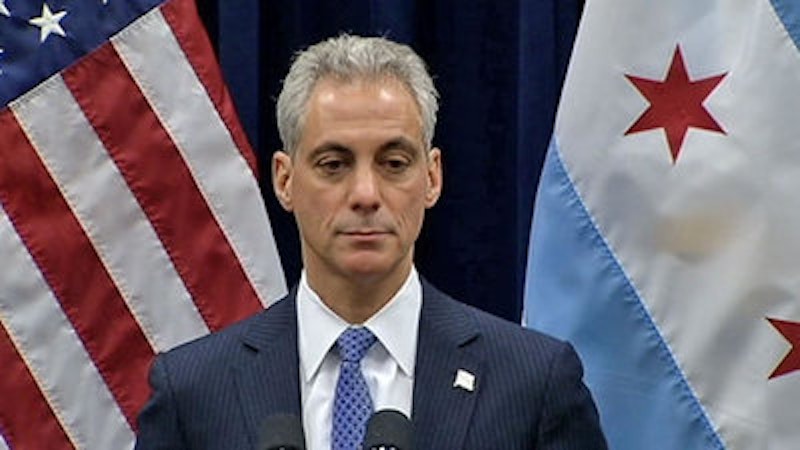 It is traditionally understood in Chicago that a medium-sized bag of feces, once elected mayor, will continue in office until a corruption scandal lands him or her in jail. The city has no Republican party to speak of, which means that elections are all intra-Democratic affairs, and whoever has the support of the establishment will, in theory, be victorious. This year, that would be incumbent mayor Rahm Emanuel, President Obama's former chief of staff.

And yet, Tuesday night, a miracle occurred. Emanuel only garnered 45 percent of the vote; Jesus "Chuy" Garcia, a member of the Cook County Board of Commissioners, won 33 percent, and two other candidates split the remainder. Rahm needed 50 percent to win outright; now there’s a run-off in April. Even if Emanuel eventually wins (and there's no guarantee he will), this is a humiliating defeat for a favored and cash-flush incumbent. What happened? How on earth did Emanuel manage to do worse than a hypothetical bag of feces?

It's not like he lacked for advantages. Chicago Teachers Union head Karen Lewis, who had name recognition and visibility and was considered Emanuel's most powerful opponent, tragically developed a brain tumor during the campaign season and was forced to quit the race. Cook County Board President Toni Preckwinkle, a formidable politician with a strong base of support, decided not to run. Obama stumped hard for Emanuel, and big donors ponied up more than $15 million for his reelection bid, outspending his nearest opponent by more than 12-1. The race appeared a foregone conclusion.

Emanuel's embarrassing failure has led some to blame Obama—or at least I saw a number of people gleefully claiming that the loss was a referendum on the President. Even Chicagoans are tired of Obama's lawlessness, the argument goes. Imagine how badly Hillary will do in 2016!

Hillary may well do poorly in 2016; who knows? But it won't have anything to do with the Chicago mayoral election. Emanuel didn't get humiliated because people are sick of Obama. Emanuel got humiliated because even a popular president can't convince you that a bag of feces is a rose garden when you've had your face shoved in the shit for four years.

Emanuel is a terrible mayor. If you live in Chicago, you only have to look out your window to know this is true. Potholes from last winter—that's from last winter, a year ago—still haven't been fixed; some streets are more holes than pavement. Snow removal this year has been insufficient as well, despite Emanuel's strident insistence that he's doing a good job.

The street level troubles aren't some sort of aberration. A brutal In These Times article published this week makes it clear that Emanuel's focus throughout his term has been on wealthy donors and cozy privatization deals rather than on providing basic city services. "Emanuel almost never met with community leaders during his first year in office, but he met constantly with rich bankers like Rauner, BMO CEO William Downe and Larry Fink, chairman and CEO of BlackRock, the world’s biggest money management firm. These are his people."

What that's meant for non-wealthy Chicagoans is ever-worse services. The public. The new CTA Ventra smart card system is a case in point. In These Times points out that Ventra has been a disaster in every city that's used it, and it didn't work in Chicago either. The cards kept failing to run through, or charged double, or didn't charge at all; there were long lines and general chaos for months. This replaced a CTA monthly pass system that had, believe it or not, worked quite well. My wife, who loved the old system, came home every day with her new Ventra card fuming. Multiply her by all the riders of the CTA, and you've got a lot of pissed-off voters.

Emanuel's most spectacular mess, though, has been education policy. An advocate of charter and magnet schools, he’s consistently demonized public school teachers and given the back of his hand to public schools themselves. His main school policy initiative has been to close local schools—more than 50 of them—on the city's south and west sides (north side communities are wealthy and influential enough to keep off the depredations.) The claim is that the closings were needed to close budget gaps, but it's not even clear that they saved money. His other major accomplishment was to increase teacher hours without additional pay, sparking a 2012 teacher's strike that had widespread public support. A recent poll showed that 2/3 of voters disapproved of Emanuel's handling of schools. Emanuel has been a huge boon for the little private Waldorf start-up my son attends; it seems like every family who can is fleeing the school system. And whether they leave or stay, they look at the Mayor and say, "That bag of feces is doing a horrible job."

Emanuel appears to have contempt for anyone in the city who is not wealthy; he's more interested in cooking up deals with cronies than with making sure city services work; he’s incompetent. Under him, Chicago's schools are in turmoil, public transportation is a nightmare, even the streets are in disrepair. And we're not even getting into the violence and lack of accountability of the police force. Emanuel got forced into a run-off because, in big ways and small, he’s worked to make average Chicagoans miserable. I don't know if he'll lose the run-off—incumbents in Chicago are hard to get rid of. But if anyone can convince my city to throw out the old bag of feces for a new, improved bag of feces, it's our shitty mayor, Rahm.