Trump’s a Caricature but Cruz is a Mountebank

The Texas senator is an unyielding and dangerous purist. 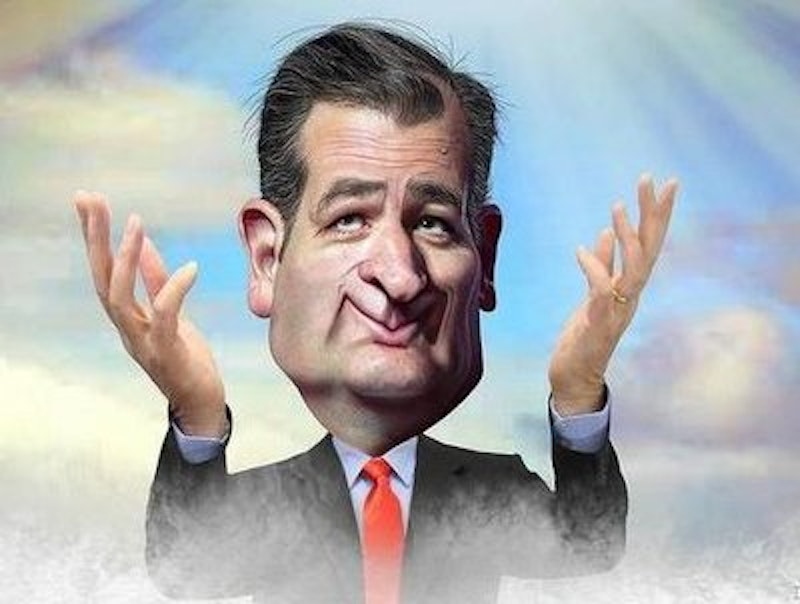 One of the enduring surprises of this presidential campaign season is why Donald Trump is relentlessly bashed in the media while Ted Cruz gets a free pass. The answers are voluminous, of course, because one’s as bad as the other except that the difference may be that Trump offers himself up as an irresistible target. Trump and Cruz are, to be sure, the evil of two lessers.

A year ago the Republican Party sold America a fantastic bill of goods: The roster of GOP candidates was the best the party and the nation had to offer. With a rolling count of 17, the bench was deep, broad, experienced and represented America’s political spectrum, according to the party’s propaganda machine. Dropping off one by one and two by two after each trial heat, leaving the GOP financiers and oligarchs flustered and listless with no place to go, Republican voters are now left with Trump and Cruz, a plutocrat and a theocrat.

Another version is that Cruz can’t win the general election so why bother whereas Trump presents a greater threat to the established order, Republican and Democrat alike. Future candidates will be emulating his outlier candidacy (without the financial wherewithal, of course.) What’s more, Cruz will be easier than Trump for Hillary Clinton to defeat because Trump’s appeal is broader and includes white working-class Democrats that Clinton is having difficulty attracting. The number of crossover Democrats is growing and incalculable at this point. Women, though, are running for cover in the opposite direction.

There is a growing list of columnists and reporters who’ve secured their careers by, perhaps unintentionally, trying to outdo each other almost daily in their mockery of Trump and their fear of his manicured thumb on the alarm button. The can-you-top-this approach is especially noticeable in The Washington Post where, Dana Milbank, Ruth Marcus, Richard Cohen, Eugene Robinson, Kathleen Parker and the paper’s editorial writers are engaged in an auto-da-fe against Trump. And pity poor Michael Gerson, a former speechwriter for President George W. Bush, who feels compelled to regurgitate regular denunciations of Trump. Yet the same number of column inches and systematic shredding aren’t devoted to Cruz who, in his own manic way, is even more menacing than Trump. Trump may be a caricature but Cruz is a mountebank.

There’s a suspicion that Trump, assessing his abundant blessings, found little else to acquire beyond the towers, mansions, planes, casinos, yachts, golf courses, TV shows, beauty pageants, branding rights, wineries and trophy wives. So Trump decided, what the hell, I have everything else so why not go for the presidency. In that sense, Trump is a dilettante, far less threatening than a man with a destructive mission and one—as most people recognize—who will be unable to carry out even a fraction of what he says he’ll do. Still, he gets bum-rapped as a political and government know-nothing and a madman while Cruz suggests far worse tinkering with freedoms and waltzes away untouched.

Cruz is the Elmer Gantry of the religious right. He is despised, reviled, the most hated man in Washington for his antics as well as his hubristic attitude. Yet he is, in a symbolic sense, the last man standing between Trump and the Republican nomination for president. Cruz shut down the government with his attempt to decommission Obamacare and he called Senate Majority Leader Mitch McConnell (R-KY) a “liar” on the Senate floor. Cruz is, with noses held firmly clamped, stiff-arms out-stretched signifying distance, and stone-cold prose frosting the air, ever so reluctantly being endorsed by a string of GOP losers and factotums. In the political trade, they are called non-endorsement endorsements. This paradox says something about the state of the Republican Party when its nominal leaders are compelled to endorse a candidate they loathe.

Cruz is the last feeble hope of wresting the GOP nomination from Trump. Mathematically, however, it appears almost impossible to deny Trump the prize. Republican voters disagree with their leaders, as they regularly do. In the latest Bloomberg News survey, 63 percent of GOP voters said the nomination should go to whoever collects the requisite delegates. Ohio Gov. John Kasich has no chance whatsoever except to act as a spoiler by scrambling delegates.

Jeb Bush, in his half-acid endorsement, called Cruz a “consistent, principled conservative who has demonstrated the ability to appeal to voters and win primary contests.” Bush added, “We must move to overcome the divisiveness and vulgarity Donald Trump has brought into the political arena…” An impassioned embrace it is not. Sen. Lindsey Graham (R-SC), another campaign dropout, said he was endorsing Cruz to prevent Trump from taking over and destroying the Republican Party. For all of Trump’s braggadocio about walling off Mexico and blocking Muslims from entering the country, Cruz is beginning to develop a severe case of echolalia. He wants to militarize Muslim neighborhoods to sift for terrorists, the precise opposite of his defense of civil liberties on the Senate floor. Cruz torpedoes Trump as representative of “New York values.”

By way of his birthright, Cruz is the son of a preacher who learned his values at Faith West Academy, in Katy, Texas, and Second Baptist High School, in Houston, where he also participated in something called the Free Market Education Program. Cruz is a relentlessly right-wing ideologue by birth and education. He was a champion debater in high school as well as at Princeton and Harvard Law School, which makes the case that he is more interested in scoring points than in advancing a discussion. And this is what makes Cruz dangerous—his rigid, intensely personal interpretation of the Constitution and his eagerness to superimpose his version of religion on the nation’s governing document.

Robert Reich, the political analyst and former secretary of labor had this to say: “Sure, Trump is a bully and bigot, but he doesn’t hew to any sharp ideological line. Cruz is a fierce ideologue. He denies the existence of man-made climate change, rejects same-sex marriage, wants to abolish the Internal Revenue Service, believes the Second Amendment guarantees everyone a right to guns.”

Cruz has established a “Religious Liberty Advisory Council” that cobbled together a 15-point manifesto that Cruz has embraced: “I have pledged on my first day in office to rescind every single one of President Obama’s unconstitutional executive actions and to direct every federal agency to respect and protect the religious liberty of every American.” This declamation illustrates the two-way appeal between Cruz and evangelicals.

The Republican nomination just might be the perfect gift for the man who has everything.