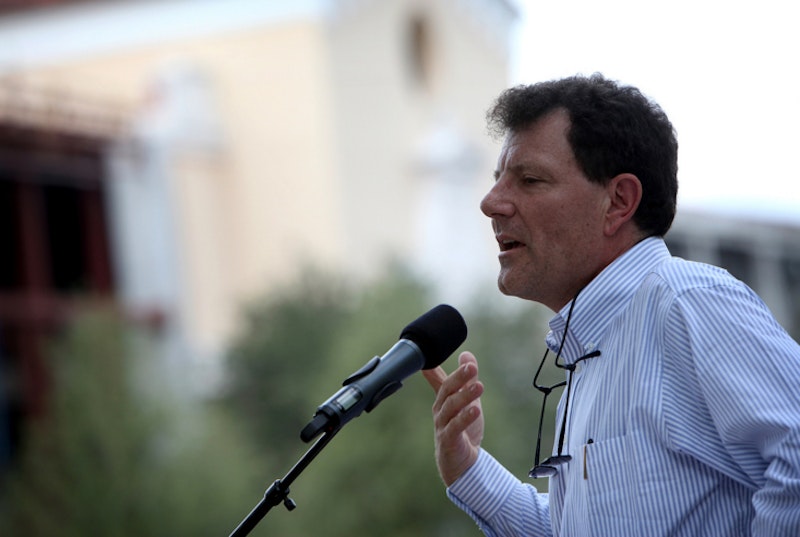 My head hurts upon reading one pundit after another retreating to a corner and wearing a dunce cap for once dismissing Donald Trump’s presidential candidacy. I believe that Nicholas Kristof—ostensibly back from countries afar (saving girls caught in the sex trade, pummeling Sudan) and reminding readers he hails from “hardscrabble” Oregon—is the last to publicly apologize for a myopia that extended far beyond the point where it was obvious Trump was a legitimate force in the election. That said, Kristof’s mea culpa was more odious than most, since the Harvard-educated New York Times op-ed columnist still traffics in elite-speak.

Yesterday, Kristof wrote: “I polled a number of journalists and scholars, and there was a broad (though not universal) view that we in the media screwed up… Media elites rightly talk about our insufficient racial, ethnic and gender diversity, but we also lack economic diversity. We inhabit a middle-class world and don’t adequately cover the part of America that is struggling and seething. We spend too much time talking to senators, not enough to the jobless.”

I’ve no idea what Kristof’s bank account looks like, but the idea that he and his “elite” colleagues “inhabit a middle-class world” is not only false, but an insult to those Americans who truly are in that economic bracket. Yes, the media industry’s been gutted in the past decade, but shed no tears for the likes of Kristof or Times colleagues such as Paul Krugman, Maureen Dowd, David Brooks, Thomas Friedman or Ross Douthat. In addition to large salaries from the Times, all of them have parlayed their notoriety into frequent television appearances, book contracts and lecture fees. These pundits—obviously not limited to The Times—may natter on, usually with each other, about the lack of “diversity” in their industry, and tut-tut about taking steno from elected officials rather than “ordinary Americans,” but it’s all talk. Does anyone expect, four years hence, for media coverage to become any more enlightened?

Meanwhile, those who’ve already completed their Trump penance, like the Times’ Frank Bruni, have moved on to the repellent spectacle that’s named Ted Cruz. It’s more than a little weird that Democratic pundits are spending so much time on the GOP race, when the Clinton/Sanders death-match is, at least right now, more interesting, but I suspect that’s an act of deference to the female candidate who’s the subject of a widespread FBI investigation. Also on March 27, Bruni’s Times column was about the grudging Cruz endorsements from GOP bigwigs, and his flowery prose, an annoying tic, was particularly wretched. Bruni: “It’s a singularly tortured love, one that grits its teeth, girds its loins and pines for a contested convention. It’s hate worn down into resignation, disgust repurposed as calculation. Stopping a ludicrous billionaire means submitting to a loathsome senator. And so they submit, one chastened and aghast Republican leader after another, murmuring sweet nothings about Cruz that are really sour somethings about Donald Trump. Will they still respect themselves in the morning?... Cruz is the love that chokes on its own words.”

Meanwhile, Hillary Clinton, whose hypocrisy on the evils of Wall Street and income inequality are astonishing, gets a pass. You’d think that at least two of these Big Thinkers would devote 800 words to the rigged (but legal) structure of the Democratic Convention that the DNC designed decades ago. Specifically, although Clinton leads Sanders by just 268 primary and caucus-won delegates, the approximately 700 “super delegates” that Clinton’s collected puts her way ahead. Why isn’t there more explanation offered to readers that these party grandees aren’t actually “bound” to Clinton and, if the race becomes closer, they could move over to the Vermont socialist’s side?

The gutter campaigns of Trump and Cruz were once rubberneck-worthy, but are fast becoming stale. If the media had one-fourth the integrity it claims to possess, more concentration on the Democratic primary would appear to be more compelling. But don’t lay down a nickel on that actually happening.