Donald Trump Said the Greatest Thing He Ever Said

But first a word from a fan. 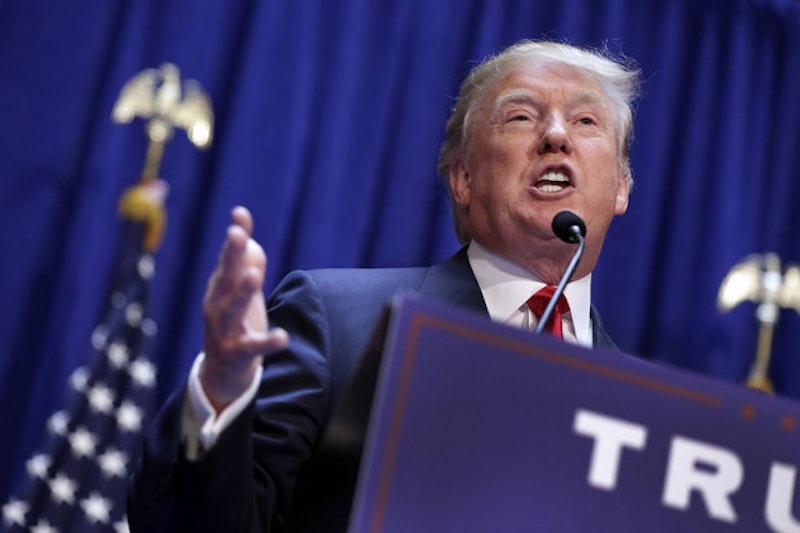 “We know his goal is to make America great again,” the Trump fan said. “It’s on his hat.” I saw that quote at the end of the summer and by now it ought to be famous. The quote is authentic (the fan, a lady, was taking part in a focus group convened by Frank Luntz). Now I’ve found a companion to it. This is from the candidate himself, from when Donald Trump sat down with the editorial board of The Washington Post. There’s a set-up and then a pay-off, and the one-two goes like this:

Frederick Ryan Jr., publisher: “You would not use a tactical nuclear weapon against ISIS?”

Trump: “I’ll tell you one thing, this is a very good-looking group of people here.  Could I just go around so I know who the hell I’m talking to?”

I can’t get over this. It’s one thing to nut-pick a supporter; maybe the hat woman is dumber than the other Trump fans. I doubt it, but maybe. But you can’t nut-pick the candidate himself, not when he’s talking to the editors of The Washington Post. The quote is the man, and the man is performing an SCTV sketch. He could be Guy Caballero, smooth-talking the stuffed shirts and starting to flounder. Sammy Maudlin would be his flunky, bailing him out by saying they’ve got a thing. Instead we have Trump and Corey Lewandowski. “We have got five minutes, hard out,” says Lewandowski, speaking up all of a sudden. “Yeah. You have a meeting you have to get to.” Admittedly, Sammy Maudlin might not have put it that way; he would have been more Vegas and smarmy. But Trump’s line, getting asked about tactical nukes and responding with schmooze—that works perfectly. Guy Caballero would have said exactly what Trump said.

Supporters say Donald Trump ought to be president. Some of them put great store by his hat. The others don’t have a reason. Let’s accept that the Republicans have a front-runner and that the big thing about this man, the unmistakable thing, is that he shouldn’t be president. He’s unfit.

DVD corner. There’s a sort of letdown that needs a cute name. Rent a DVD expecting a black-and-white classic, and instead you get 1950s color and possibly a widescreen technique that somehow puts a thumb in your eye. Cat on a Hot Tin Roof (1958) pins the characters between the horizon and a sky that’s dumping a truckload of clouds on them. Everything seems to have a black line around it, and the sky is a blue that looks overbright, unhealthy. Paul Newman is there, and Elizabeth Taylor (two chins, even then). They’re saying lines from Tennessee Williams, but I expect the story has been chopped by censors.

The movie seems typical of 1950s Hollywood, in that mighty effort is made but nothing is done right. Everything is an approximation of quality and everyone is so full of themselves. People don’t hate Hollywood anymore; they get impatient with it. The Hollywood of Cat on a Hot Tin Roof is hateable.