There is no "good crisis" in politics. 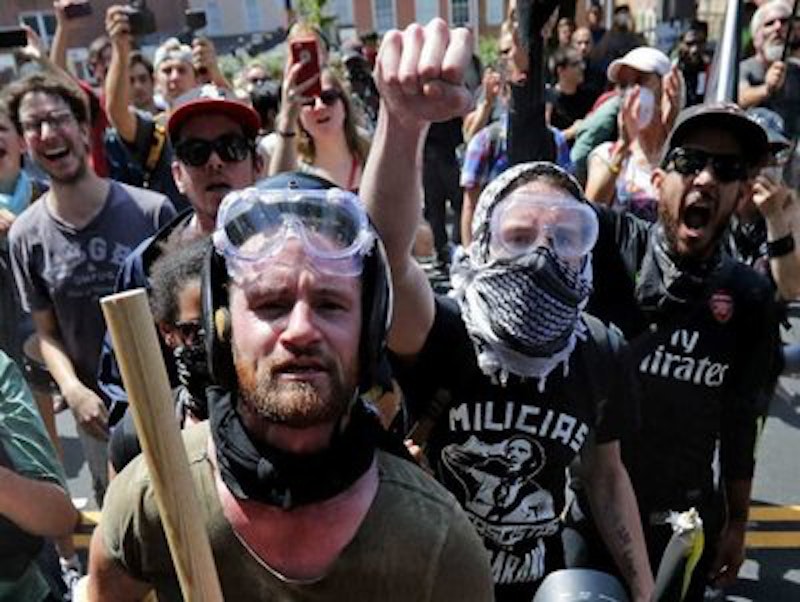 Some people like crisis and upheaval a bit too much. They have their reasons, but you can’t help suspecting they have a sadistic streak, too.

Instead of the moneyed donor types and party organizers urging people to avoid Antifa/alt-right clashes, there are credible rumors that some people were actually hired like actors to add to the size of Charlottesville crowds—with some buses reportedly shipping in people from both political factions to go do their thing and add to the street theatre (until someone got killed). The ads seeking activists-for-hire before the event are real, though we can’t read minds and know the motivations or sincerity level of everyone there.

But who would want such clashes, perhaps even while being indifferent to the underlying right vs. left arguments ostensibly being played out? Well, there are plenty of people more invested in narratives such as “social upheaval is increasing” than in settling the more specific questions over which right- and left-wing pundits ostensibly argue. And the sorts of people who like those broader trans-partisan chaos-narratives can, among other tactics, hire large, very wealthy PR firms to stoke the flames.

Madison Avenue public relations firms were born in an incestuous embrace between capitalism and Democratic president Woodrow Wilson’s war propaganda efforts a century ago, so they’re old hands at this sort of thing. And they have contact information for lots of people at major media outlets, especially at TV news networks, which desperately need exciting pictures.

Who would be so cruel as to traumatize the public by playing up instead of tamping down such tensions? Well, people across the political spectrum have noted that crises offer opportunities, and in their way those people may even mean well if they’re convinced something better awaits us—or at least awaits them—on the other side of the time of tumult. The advice to “never let a good crisis go to waste” has been attributed, probably apocryphally, to Churchill, and was repeated by Chicago mayor and Obama crony Rahm Emanuel—but maybe capitalism-bashing leftist Naomi Klein was onto something as well when she warned in Shock Doctrine that right-wing or nominally-free-market advisors can also swoop in to make big changes in a “traumatized” region (after, say, floods or wars).

I wouldn’t make the leap she does of thinking that all of Nobel Prize winning economist Milton Friedman’s policy preferences were bad just because those policies sometimes get imposed as emergency measures (government-as-usual is awful, too), but I can see reason to be very suspicious of advisors who smile just a bit too happily as they offer a helping hand while you’re plainly weeping, battered, and confused—sort of like the man grinning excitedly at the bus stop who offers to take cute female homeless girls back to his place until they can get on their feet.

It’s fair to ask, for instance, whether lurid journalistic accounts of crime in the Victorian-era press were really aimed at improving things, as opposed to stoking a paranoia that sold more papers. It’s fair to ask whether David Lynch likes to see good triumph over evil or mainly just likes to see people forced to crawl. It’s wise to keep in mind the warning of former corporate economist John Perkins in his Confessions of an Economic Hitman that a lot of very self-interested (and powerful) people may be pressuring a few young, eager-to-please analysts to urge the next regime-toppling war, massive government subsidy, or crony-pleasing “privatization” plan, even if you like the sounds of the democratization, infrastructure, or prosperity you’re told will surely follow.

Trauma, as psychologists understand, creates confusion and desperation, which to most of us sounds like an obviously bad state of affairs but sounds to many sick opportunists like an opening to infinite new possibilities and of course the chance to offer heavy-handed guidance. If the government thought having Batman around was a good thing, would you trust it to prevent Thomas and Martha Wayne being gunned down before his eyes? Or would they help Joe Chill buy the gun?

The profiteers of conflict—whether in government, media, or genuine fringe groups hoping for some fleeting attention—have a variety of readymade or stokable crises they can pounce on, with terrorism and war just the most obvious examples. Sometimes it’s a natural disaster. Sometimes it’s an uptick in Weimar-like brawls between political gangs. Greeting such events with opportunistic glee is horrible regardless, though, isn’t it? Neither pundits nor even members of those marginalized gangs should do so.

It’s darkly amusing that in the wake of the Charlottesville fracas, one of the right-wing organizers tweeted an insult of the leftist woman who died, then tried to explain away his tweet with the sad statement, “I repudiate the heinous tweet that was sent from my account last night. I’ve been under a crushing amount of stress & death threats...I’m taking ambien, xanax and I had been drinking last night. I sometimes wake up having done strange things I can’t remember.”

I hope those words don’t end up replacing Emma Lazarus’ as the new national poem. It sounds as though he feels as traumatized by politics as the rest of America. Maybe we could all do with some rest and calm. There’s no shame in that. There are a great many other choices being offered lately that will likely lead to greater shame.