A Bleak Moment for Free Expression

The future of freedom is truly fucked. 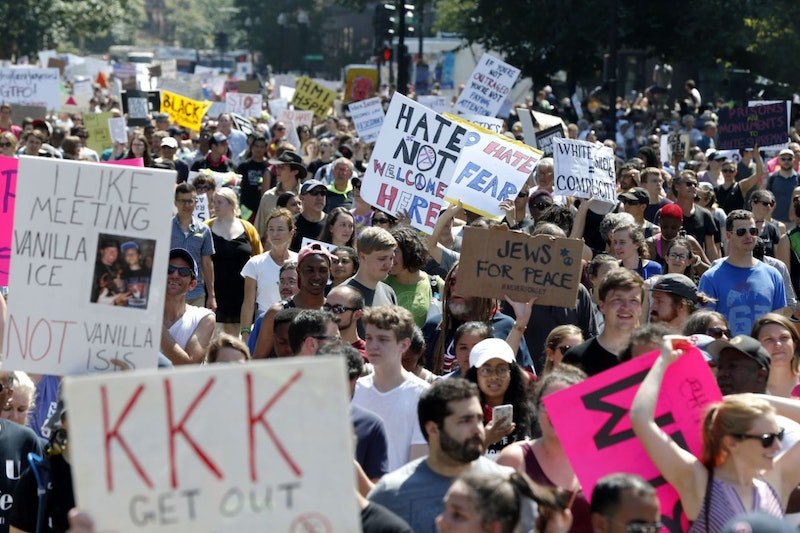 First, it's true that the neo-Nazis are going to need free speech rights to make their point in public. But let's also point out the obvious: when in power, actual fascists start by censoring the positions of their opponents, proceeding to executions. No regime, with the possible exception of some communist dictatorships, ever controlled the forms of expression—the press and the arts at their broadest sweep—with the obsessive brutality and idiotic certainty of the Nazis.

If, by some insane series of events, Richard Spencer became President of the United States, I don't think you'd see a free-speech fundamentalist; you'd see a brutal regime cracking down on all anti-racist, anti-sexist, anti-homophobic expression, all advocacy of socialism or other anti-right ideas, all art by Jewish people, and so on. We might say that the far right, in the current situation, absolutely needs free speech. We might also say that if they had the power they’d crush it immediately.

By some accounts, Donald Trump is, more or less, President Richard Spencer. Let's note that he has expressed himself with more hostility toward a free press than any president in American history. He’s at war with the press, has hinted at trying to change libel laws, for example, and that media outlets who publish leaks from within the government should be prosecuted. If he actually had the power, I think he'd just delete the failing New York Times and CNN. What's keeping him from trying something like that, I believe, is the Constitution and the courts that enforce it.

If that's true, then anti-Trump people demonstrating against free speech are opposing something that they may find themselves needing in the worst way. And I think the idea that they’re demonstrating against free speech is, unfortunately, more than a right-wing propaganda ploy: they truly believe that speech they regard as racist or homophobic constitutes violence, and hence ought to be prohibited by law. The idea that speech is violence will, in a right-wing regime, put the people who advocate it in prison for assault.

The basic thrust of contemporary leftism, or what distinguishes it in part from previous versions, is that it’s focused in an extreme way on controlling symbols: it concentrates on deleting bad words, statues, and pictures. It thinks that that in itself would contribute substantively to or even constitute social justice. Underlying it is a theory of the relation of signs and realities: the theory that signs create reality. It's a metaphysical position, we might say, about the nature of the universe, which is supposed to be the result of our signifying practices.

I'm going to assert that this is a ridiculous theory, and I also say that no one who can live in the world can sincerely believe it, and I say I can annihilate it utterly on the philosophical level. I wonder whether that would matter at all to any of its advocates. But that you’re going to try to tell me what to say all day rests on a philosophical mistake. Of course, there might be other and better arguments against free speech.

But, as I say, what the left should realize is they need free speech right now, and they are likely to need it in the future to stay out of prison or even stay alive. Trump was elected president last year, and it is quite possible that the United States at some point will undergo eight or 16 years of right-wing government.

Now, the left is concentrating on setting up informal and formal mechanisms by which expression they don’t like can be controlled. All of these mechanisms, I predict, will be visited upon the very people who advocate them. If the left constitutes a legal framework for imposing a particular narrative of American history, or identifying speech with crime, it should expect to wind up the victim of the institutions and habits it has inculcated.

This thing on my face? It's my mouth. That one on yours is yours. I'm in charge of this one; you're in charge of that one. So get out of my face. That's pretty basic, and I think that the history of attempts to suppress leftist speech should’ve taught that to leftists long ago. When they come to close down the Guardian US and haul away the staff, I will oppose that, but I'll also note that they’re getting what they asked for: a community united by repression of expression and expressers.

On the other hand, when someone comes at me waving a swastika and a copy of the First Amendment, I'll just laugh. Then I'll just cry. Either way, the future of freedom is truly fucked.