Were the Nazis Socialists?

The Right and Left just talk past each other on the topic. 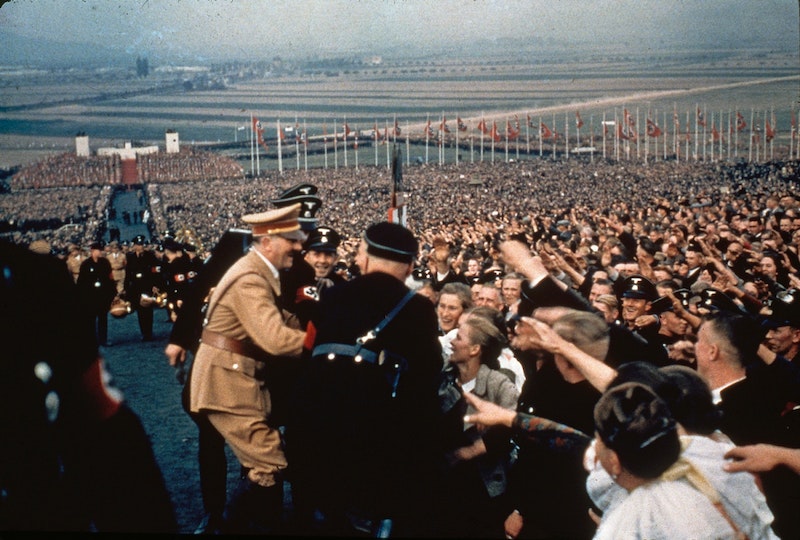 If you want to see left-wingers lose their composure, watch what happens when a right-winger tells them that the Nazis were socialists. The horrors of Nazi Germany came under fascist capitalism, they’ll insist. Right-wingers love doing this, because it drives their political adversaries nuts, which is often their main political motivation today. Leftists return the favor by sneering that only bumpkins ignorant of history would ever make such an allegation, while trotting out a standard set of talking points to prove their point. One that you're sure to hear is that the Nazis couldn't have possibly been socialists because as soon as they got in power they jailed socialists.

The above scenario played out recently on Twitter when right-wing journalist (The Daily Caller, Heat Street) Ian Miles Cheong met with a torrent of abuse for trolling the left with: “Nazis were socialist.” British history writer Mike Stuchbery took the bait, coming on like a left-wing Rambo with: ”Ok, dickhead, I did this politely to someone else earlier, but now I'm going to rinse you. Prepare.” Then he launched into a flamethrower tweetstorm, explaining that the National Socialist Party was only socialist in name, and that the word was cynically used to expand the voter base. He also tweeted that the Nazis were fascists so they couldn't be socialists, and that “they saw themselves as racially/nationally superior.”

Stuchbery was keen on bullying a deplorable conservative, although ironically he was the only one who behaved like a dickhead. As so often happens when the left and right try to communicate, the two were just talking over each other. From Cheong’s point of view, some lefty history “expert” was just nitpicking him. He knows that the Nazis were fascists rather than Marxist-style socialists, but he's more concerned about the totalitarian aspects the Nazis and the Bolsheviks had in common.

While the Bolsheviks nationalized the means of production after taking power in Russia in 1917, one right-wing point of view is that Hitler did this too, just differently. German industry remained technically independent from the government, but the Nazis had de facto control over how much they produced and what they could charge for their products. When government can set production levels and determine prices, it looks like socialism to some. The Nazi government also controlled the methods of production, where it was distributed, wages, and the income “private” business owners would get. Hitler instituted massive public works projects like the autobahns, created jobs programs, and enforced capital controls.

Cheong didn't respond to Stuchbery’s point on the Nazi claim of racial superiority being a disqualifier, but a conservative might offer that while they took this concept to the level of unspeakable horror, the Nazis used populist rhetoric to push egalitarianism, not laissez faire capitalism, for a select group—Socialism for Aryans, if you will. Under the Nazi’s Strength Through Joy program, Germans received leisure opportunities such as Alpine ski trips, cruises, and theater tickets that were previously available only to the higher classes. And are people really to believe that bigotry is a disqualification for earning the socialist imprimatur when Stalin was planning a pogrom for the Jews in the final years of his rule, and Karl Marx himself was a racist? In an 1862 letter to Frederick Engels concerning a political rival, the father of socialism wrote, “It is now completely clear to me that he, as is proved by his cranial formation and his hair, descends from the Negroes from Egypt, assuming that his mother or grandmother had not interbred with a nigger.”

Cheong tweeted, regarding socialism, “It was a rival socialist ideology. I didn't say it was Marxist.” That, in a nutshell sums up one conservative view of Naziism. He cited German academic Johann Plenge, professor of political economy and authority on Marx. His socialist views eventually veered from orthodox Marxism and took on a nationalistic tinge. Cheong’s reflecting the commonly-held belief that Plenge’s thinking was a main intellectual forebear of Nazism. National Socialism didn't value liberty and individualism—it was rooted in collectivism for the master race. Hitler knew he needed to stir up tribalism to create his Aryan paradise. He realized that without the power and passion that it creates, he'd never be able to take control of the means of production. He chose the racial angle, while the Bolsheviks chose the class struggle to gain dictatorial power.

Mike Stuchbery concluded his self-satisfied rant with, ”So you see, @stillgray there's a big fucking difference between fascism and socialism, in that they're COMPLETE FUCKING OPPOSITES.” He's one of that special breed of swaggering, tough-talking ideologues that make Twitter often resemble a festering swamp filled with fragile egos in desperate need of validation. Cheong was wise not to engage with him much, because when you wrestle a pig you’ll get mud all over you. Nobody wants the taint of the Nazis on them, so people partial to socialism don't take it well when someone tries to make the connection. What people like Stuchbery don't get is that some don't care when he says fascists can't be socialists. They're more focused on the trait they share in common—totalitarianism.