Morality Aside, Antifa Strategy Is Flawed

Leftist street violence is usually a gift to the right. 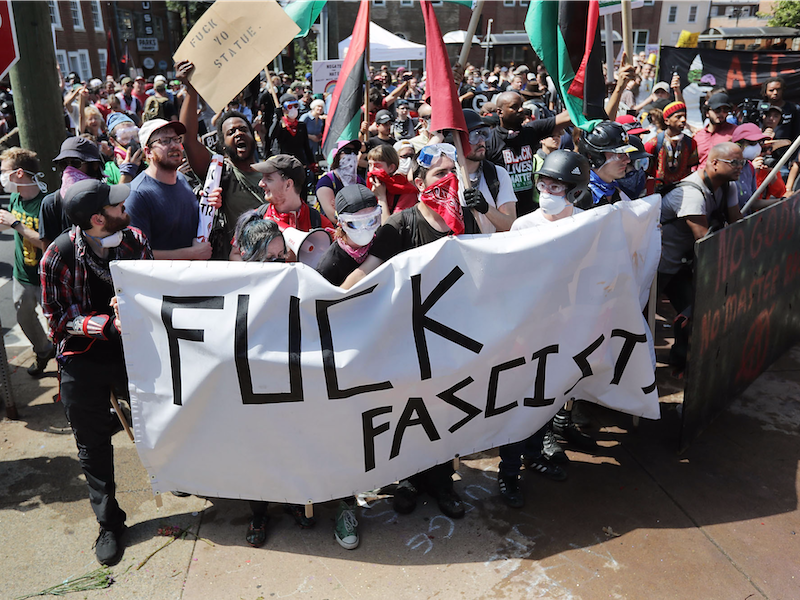 Donald Trump's disregard for the traditional institutions of American democracy and his flirtations with the alt-right is causing anxiety outside of his devoted, unwavering base, especially in light of the President's post-Charlottesville moral equivalency between white supremacists and their counter-protesters. Activists of the anti-fascist movement known as Antifa have responded to what they view as inchoate American fascism by violently confronting Trump supporters in the streets and forcibly preventing right-wingers like Anne Coulter and Milo Yiannopoulos from giving public talks. Their rationale is that all fascism must be nipped in the bud before it can bloom, and that civil discourse and other nonviolent tactics aren't up to the task.

Antifa activists are the self-appointed, unelected fascism police. Their motto is “punch a nazi,” which to them is a defensive act, given their belief that fascists present a clear and present danger to society. They define “nazi” broadly, often to the point where any Trump supporter is one. Antifa’s promotion of violence for a good cause makes it a polarizing movement, because its often-anonymous activists decide who the bad guys are and whose opinions are too dangerous. Analyzing the anti-fascists from both moral and strategic perspectives is helpful in evaluating the movement's place in contemporary left-of-center politics. Antifa activists, sometimes dressed all in black, with bandannas obscuring their faces, are always a visible presence when Trump supporters gather publicly.

As no democratic institution appointed Antifa activists to be the enforcers of liberal democratic ideals, Antifa becomes a law onto itself. Antifa activists are police-hating vigilantes for justice who think the cops are complicit with the fascists. They're revolutionaries who’d like to topple the U.S. government and install socialism or anarchy. Realistically, there's usually not much the police can do to stop Trump supporters from demonstrating peacefully. In Boston two Saturdays ago, 30,000 showed up to protest what they thought was another Charlottesville-type event, when it was just a small free-speech rally. Antifa activists clashed with the police instead, throwing urine at them.

Except for pacifists, most people can imagine extreme circumstances where violence is justified. Antifa has a shot at being accepted on the left because they're fighting Trumpism. Crush the fascists early and they'll go back in their hole, so they say. The problem is that the morality of a mob is always dubious, and when Antifa activists cover their faces and get into their nazi-punching mode, they're a mob. Mobs are always certain they're doing the right thing, even when they're doing the opposite. When a mob brutally murdered a college student in Pakistan in April for alleged blasphemy, it was sure it was acting righteously. You don't torture and kill a fellow student unless you have absolute conviction in your cause.

Morality aside, the efficacy of Antifa’s violence is questionable from a strategic point of view. The leftist unrest of the 1960s provides an instructive template for what could devolve if violence becomes an acceptable way to fight injustice. Radical groups like the Weather Underground and Symbionese Liberation Army, eschewing peaceful resistance, opted instead to use bombs, firefights in the streets, and kidnapping to fight the establishment. They failed, repulsing even most of the people who sympathized with their goals in the process.

For their book, Why Civil Resistance Works, Erica Chenoweth and Maria J. Stephan studied 330 nonviolent and violent campaigns against violent opponents over the past century and found the nonviolent approach twice as effective. A key to resistance movements is the participation rate—allies must be brought aboard. Violence undermines the moral power of nonviolent resistance to fascism. It muddies the message and presents obstacles to alliance-building. Chenoweth and Stephan found that nonviolent resistance campaigns have a participation rate 11 times that of violent ones.

Most people are hardwired to recoil from violence and chaos. In 1927, the Nazi Party scheduled a rally in the left-leaning Berlin neighborhood of Wedding. The anti-fascists intervened, sparking a massive brawl. It was a therapeutic response to perceived evil, but historians now believe a series of confrontations like the one in Wedding helped the Nazis build their regime. Germans became alarmed at the spiraling cycle of violence in the streets, blaming the anti-fascists. The anti-fascists took the bait from the Nazis and showed up to fight, but the Nazis looked like the victims.

The Nazis chose left-leaning areas like Wedding for a reason, just like Trumpist demonstrators are choosing liberal hotbeds like Berkeley and San Francisco to make a stand now. Antifa activists are biting, just as they once did in Germany. The media has been covering for them, ignoring their violence because they're on the right side, but now that people know who they are after Charlottesville, this will be more difficult. The Democrats, who saw strategic failures lead to Trump's election, need to be careful if they're thinking about embracing Antifa. If they look at history, they'll see that when their side fights the right in the streets, the right usually comes out on top.