America’s on a Pill Binge 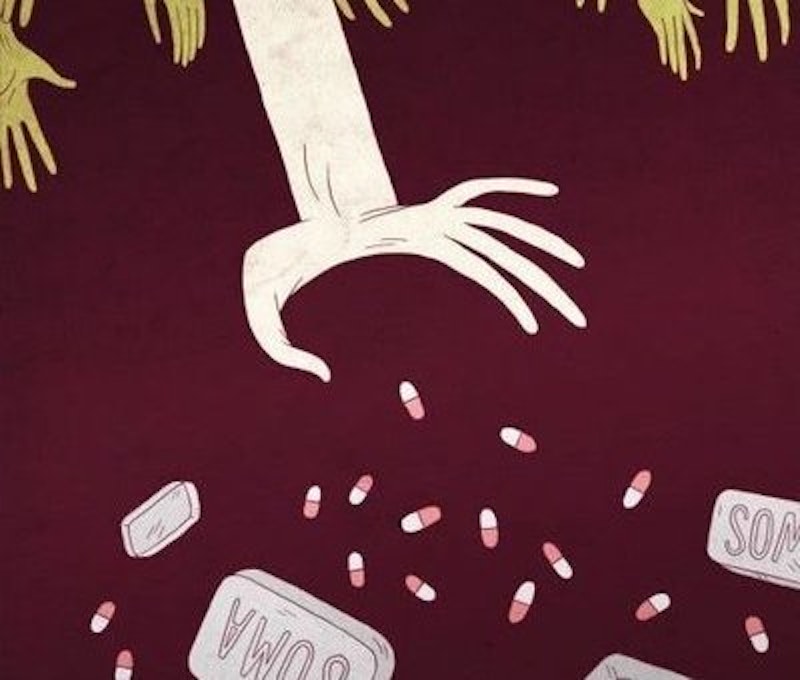 There’s a quick and easy cure for the opioid curse. Turn off the television set. Better yet, outlaw all pharmaceutical advertising the way that government banned cigarette ads. But that seems a long way from happening in the best Congress that money can buy. In one year, the pill industry spent $241 million on lobbying, and last year it gave nearly $10 million to presidential candidates. Pfizer alone spent $10 million on lobbying last year. Pfizer also showed profits of $11.3 billion on sales of $51 billion, in part by helping to beat back efforts to cap drug prices.

If that’s not enough capital to block or delay curbs on pill-pushing, consider this: Last year, big pharma spent about $5.2 billion promoting its products, about $3 billion on marketing to consumers and $2.4 billion to influence physicians and health care professionals, the people who write the prescriptions for medications. A quarter of the $5.2 billion was spent bombarding television audiences with commercials for only five drugs—Humira, Lyrica, Eliquis, Cialis and Xeljanz.

Television tells us there’s a pill for every ailment, as close to the nearest pharmacy or medicine chest, drugs for all reasons and every season—decongestants for spring, balms and blocks for summer, body-clock adjustments for fall, analgesics for winter, drugs to ease mood swings, and an all-season blue pill to arouse that vagrant gland—and opioids for the worst afflictions, including a non-prescription year-around feel-good high. Maybe legalized pot is the antidote to prescription drug abuse. There’s no recorded case of marijuana overdose (though smoking is hazardous to your health.)

America’s on a pill binge. Doctors write nearly five billion prescriptions a year, according to available statistics. Over the last 10 years, the percentage of Americans taking one prescription drug rose from 44 to 48 percent. Those taking two or more increased from 25 to 31 percent, and those taking five or more jumped from six to 11 percent. And within those figures, there are about 100,000 Americans who die each year from prescription drugs. An estimated 91 people die every day from opioid overdoses. From 2000 to 2015, more than 500,000 people died from drug overdoses.

President Trump, at first rejecting and later hesitating, finally declared that opioid abuse is a national emergency. Maryland Gov. Larry Hogan has been out front on the issue and among the first governors to address the opioid epidemic. Hogan has appropriated an additional $50 million to combat the crisis, and he has joined with Virginia and the District of Columbia to crack down on its spread. Maryland is among six states to declare opioid abuse a public health crisis. The epidemic is not confined to urban areas but is equally as lethal in rural counties of Maryland and other states.

In Maryland, there have been 550 drug and alcohol overdose deaths during the first quarter of this year, according to the State Health Department, up from 401 in the same period a year ago. Of those, 372 were deaths from fentanyl, the powerful synthetic opioid favored on the streets along with heroin and carfentanil.

In the vocabulary of the streets, opioids, or synthetic morphine, have a colorful nomenclature—God’s Drug, MS, Morph, Morpho, First Line, Email, Mr. Blue, TNT and Goodfella, to name a few. In some cases, they are code words for substitutes such as Roxanal and Demerol when the real thing is not available. The overdose antidote, Naloxone, is costly and in short supply in many areas, though in others police are equipped with reversal kits.

Opioids, by their various forms and names, produce a powerful surge of euphoria. Opioids’ initial forms were codeine, heroin, morphine and poppy seeds, whose main supply was (and still is) Afghanistan and a mainstay of the 16-year war there. (Part of America’s war is to defoliate Afghanistan’s poppy fields, the main source of heroin, which the Taliban try to control to finance their takeover of the country.) But the widely available culprit today is fentanyl, a synthetic derivative which is pouring into America via its main suppliers and producers, China and Mexico.

The opioid epidemic mimics a projection of Aldous Huxley’s satirical take on chemically induced happiness, Brave New World, in which the characters mope along in a stupefied buzz on the hangoverless pleasure drug, Soma. Opioids are supposed to drive off anxieties, but they’ll still be at the doorstep when the artifice wears off and if the user lives to talk about it.

Television’s pharmaceutical commercials don’t so much promote drugs as they glamorize them as did the earlier movies and TV sitcoms with the use of alcohol and cigarettes. The drug ads create a culture of emulation and dependence, not for any single drug but for all drugs. Take a pill and be happy. Take a pill and have clear skin so you’ll make out. Take a pill and get lucky. Take a pill and live forever.

Recall the Viagra commercials with the alluring babes in their clingy silks waiting for the guy’s little blue pill to kick in. And in the latest iteration of selling pleasure, perfectly smooth skin, produced by a pill, is the most assured way to score. Humphrey Bogart never looked more masculine than with a smoldering cigarette dangling from his lips and a brandy snifter resting half-mast in his cupped hand.

Ask any doctor the biggest problem with prescribing medicine and almost surely he or she will answer: (1) The patient will say I saw Brand X on television and I want it; or (2) Aunt Mary takes Brand X and it works for her and I want the same thing. Or, reverse the equation and the chances may be that the doctor earned a bonus free week in the Bahamas, courtesy of big pharma, for pushing certain drugs, or even prescribing triple the dose that’s needed, goosing sales and profits. And all the while the excessive pills will rest in the family medicine cabinet, extending their narcotic reach to the kids in the house.

And therein lies the heart of the opioid epidemic. Most kids—and kids are mainly the victims in this plague—who zonk out on opioids of one description or another, get the potential poison pill either from a home medicine cabinet or a peer who sneaked it the same way. In many cases, they’re aware that it’s a prescription drug, written for a parent or another relative, but they have no idea what it is or what it’s for. Opioids are usually prescribed for patients with severe pain, usually from surgery, and those with advanced stage cancer.

Smoking has declined steadily in America through a combination of government bans, high user taxes and intense education on its lethal effects. Only 15 percent of adults still smoke nationwide, and the teen smoking rate is down to six percent. Smoking is now circumscribed by economic class and education level.

The same could be done with opioids. Government can act to control drug advertising, if not completely then partially, by eliminating the promotion content and running only the endless disclaimers. Hearing the life-threatening side effects alone for any length of time ought to cause any rational person to toss their lunch and swear off drugs forever.