Call it “Socialism for People Who Like Shark Tank.” 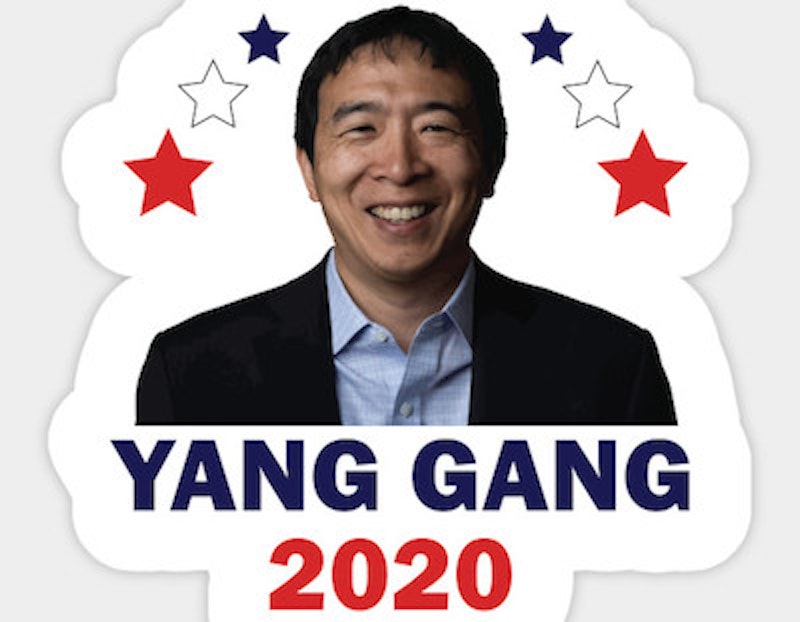 Democratic presidential candidate Andrew Yang is beloved by neoliberal nerds and unemployed keyboard warriors alike. He talks up a robot future while invoking the well-worn story of Robin Hood taking from the rich and giving to the poor. He’s a technocrat who weeps for opioid addicts and unemployed truckers. He’s a high-tech maven who winks at nostalgia for 1980s mall culture. He’s a non-partisan utilitarian who aims high, but who’s thrown in with conservatism’s lowest of the low.

In a 55-minute talk at South by Southwest recently, it took 46 minutes for Yang to finally make a comment disparaging Trump. (“The opposite of Donald Trump is an Asian guy who likes math,” he’s said elsewhere.) And he avoided saying anything bad about his Democratic rivals, or either party in general. This is a dyed-in-the-wool, above-it-all policy wonk. This is not a man who likes to pick fights. As for his unpredictably (but notable) alt-right fans? They live for conflict.

$1000 a month, that’s what. It’s an easy and inherently popular promise that’s propelled Yang to the political B-list in recent weeks. And it’s a promise based on a premise: that increasing automation is going to gut jobs and render millions of Americans “zero marginal product” workers. Retail jobs—the most numerous type of job in the country, Yang likes to point out—are gradually being snuffed out with the shuttering of famous department store chains. It’s a fact that’s become something of talking point for Yang, a CEO who’s made it his schtick to go full “the 99%” without ever actually using the term.

His general worldview is pro-capitalist and meritocratic, yet he’s the only Democratic candidate to offer no-strings attached cash to all Americans, something even self-described socialists have so far failed to sign on to.

“If America is destined to decline, they’ve concluded in a fit of cynical exuberance, they might as well at least get some money out of it,” Ben Sixsmith observes of Yang Gangsters. “Some of them are a little more calculated, seeing the potential to take their thousand a month and spend more time on creative and social endeavors with less of a need to work.”

Samuel Argyle at The Outline believes that this desire for a so-called Universal Basic Income is the cry of privileged white males, bizarrely (this is universal, recall). It’s a claim difficult to square with the fact that privileged people don’t want or need handouts, and have historically stood firmly against them.

But the kernel of truth here regarding privilege is that Yang appears to be the preferred candidate of the Silicon Valley cognoscenti. And it’s not hard to see why. He speaks their (programming) language. To even broach the subject of a future in which robots reign and humans have been rendered economically redundant is to be off the ideological radar of most politicians and their constituents. But they get it. Not only that, but the data-crunchers privy to this looming crisis and sounding its alarm bells are both economically comfortable and paradoxically responsible for bringing such a future to fruition.

“Yang, who far surpasses the other presidential candidates in his ability to cite numbers and statistics,” noted the San Francisco Chronicle in its recent coverage of a Yang rally. “His plan would give the 68 percent of Americans who don’t have college degrees a basic income that would help boost spending and the economy while the country invests in technical and vocational training for them.”

This form of high-low combination puts a spin on the same made famous by previous Democrats, which bridges the educated rich with the urban, minority poor as the former speak up for the latter’s interests. The Yang Gang version largely preserves the educated rich part - albeit of a more strictly tech bent—but matches it with the suburban, non-minority poor. Some of the most impoverished areas of the country are now the dead mall-laden metropolitan outer rings, as the inner city has long since or is undergoing gentrification.

Throw in the cultural angle—Yang is relatively devoid of the identity politics talk so trendy among more mainstream candidates—and you’ve got a recipe for a Democratic party platform that’s by default most agreeable to economically down-and-out males for whom a good job is no offsetting palliative to the politics of resentment.