The party’s knack for self-destruction doesn't bode well for 2020. 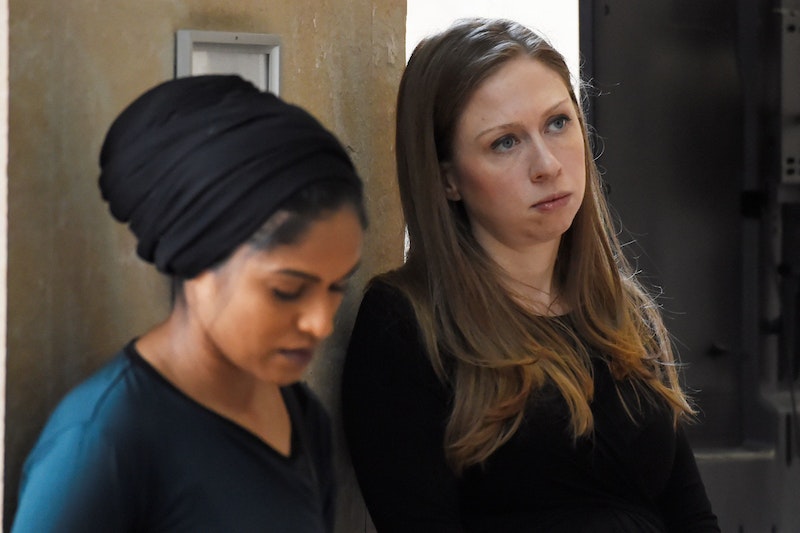 Plenty of mainstream Democrats got riled when Chelsea Clinton went to a vigil for the victims of the New Zealand mosque massacre and a Bernie Sanders supporter got in her face and blamed her for the tragedy. Sure thing, and Sam Cooke’s responsible for giving us Maroon Five.

These Democrats were excited about the three “fresh faces” of diversity who were elected to Congress in the midterm elections—Alexandria Ocasio-Cortez, Ilhan Omar, and Rashida Tlaib—but they’ve remained conspicuously silent on the Chelsea Clinton incident, which indicates tacit approval for her ambush. These naive mainstream Democrats don't understand that when the fresh faces got elected it would move the party in a direction where a Democrat could be partially blamed for a massacre of 50 worshipping Muslims halfway across the world and it wouldn't be universally condemned within the leadership of the party.

It's not as if there's a gray area that would give pause to anyone thinking of commenting on the sucker-punching of the former First Daughter. Leen Dweik, an international relations and Middle Eastern and Islamic studies student at NYU told her, during a screechy, spittle-flecked rant, "I want you to feel that deep inside. Forty-nine people died because of the rhetoric you put out there.” The mass murderer has released a lengthy manifesto containing Chelsea Clinton's name zero times.

The rhetoric the unhinged female student was referring to was when Chelsea took to Twitter last month to chastise Ilhan Omar for her allegedly anti-Semitic comments. Only the weakest of minds could find a direct connection between that one tweet, which didn't even mention Muslims, and a slaughter of such magnitude, so the likely explanation is that BDS supporter Dweik cynically took advantage of the situation to bring attention to herself as a call-out culture hero. “We took our chance to speak truth to power,” Dweik told ABC News.

Except she left the truth part out in favor of self-aggrandizing posturing, which hardly mattered to her target audience. It was all about the performance of a dark-skinned Muslim woman full of self-righteous fury slaying a white benefactor of privilege while the camera's running.

You know something's off when Donald Trump Jr. comes to the defense of the daughter of Crooked Hillary while people on the left pummeled her. In an article that Dweik and her fellow pro-Palestine activist Rose Asaf wrote for BuzzFeed that's pure propaganda, the authors puff themselves up by claiming that Clinton hurt their fight against white supremacy by standing up to the “petty weaponizers of Anti-Semitism.”

Chelsea Clinton, a victim of anti-Clintonism since she was a child (John McCain once said she was “so ugly” because Janet Reno was her her “father”) is a bad person because she showed “no regard for Rep. Omar and the hatred being directed at her,” even though Clinton hasn't indicated any such callousness. Dweik and Asaf didn't back down on the slanderous claim that Clinton helped incite a mass murder, further accentuating their dishonesty. They cast a net for anti-Muslim bigotry so wide that anyone daring to disagree with them can be caught. That's intentional—the purpose is to silence people.

The Democrats who were thrilled by the fresh faces now find themselves in the position of being potentially labeled as Islamophobes themselves because they've come to Chelsea Clinton's defense. There's now a serious rift in a party that has shown tolerance for anti-Semitism as long as it comes from the Left.

It's ironic, yet predictable, that people like Leen Dweik, who jump to irresponsible conclusions when one of their own’s called an anti-Semite are so liberal with their charges of Islamophobia. A prominent member of this group is “progressive” activist Linda Sarsour, who shortly after the attack on Clinton tweeted that she was “triggered by those who piled on representative Ilhan Omar and incited a hate mob against her until she got assassination threats.” These people, she said, “contribute to Islamophobia.” The implication is that people should care about about what happens to “trigger” Sarsour, who's a key part of the leadership team of the Women's March that's come under fire for anti-Semitism.

This controversy's good news for Donald Trump's prospects in 2020. Though beleaguered, he can take comfort in having to go up against a Party that's so adept at dividing itself. Democrats are now prone to judge people by their gender, skin color, and religion, as opposed to their beliefs. The result is that Dweik, who has three full intersectionality points as a brown, Muslim woman, can make a reprehensible charge against someone who's always stood against bigotry and progressives don't unanimously condemn it.

While Chelsea Clinton should be entitled to one intersectionality point as a woman, her prominent position in the oppressive power structure means that, effectively, she's treated like a white male, the lowliest member of the “progressive stack.” Republicans, not burdened with such convoluted nonsense, have to feel good about this one, and there's plenty more to come.