Students upset that a law professor's representing the wrong guy in court. 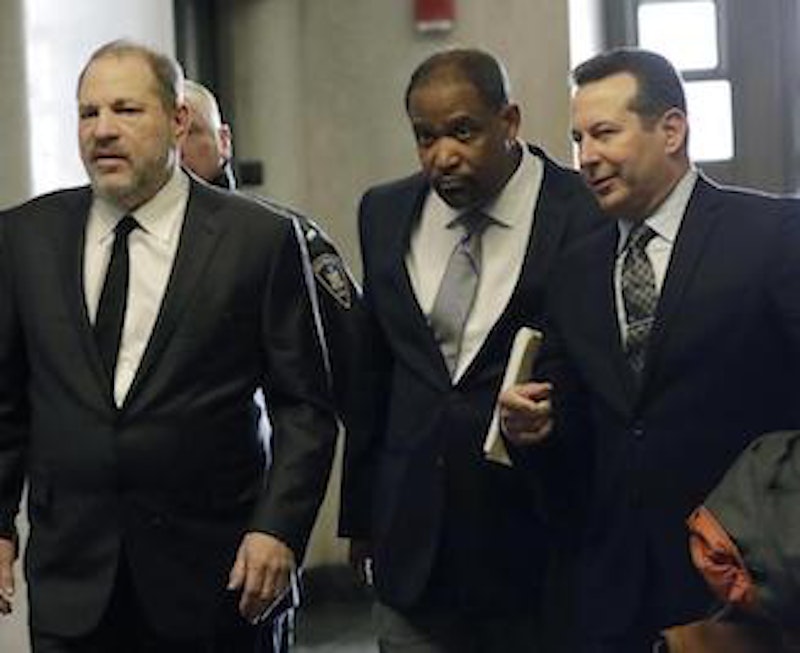 These are tense days for elite institutions of higher learning. Students at Sarah Lawrence College began occupying the main administration building last week with a list of over 100 demands. And at Harvard, a distinguished law professor and faculty dean of one of the university's 12 undergraduate resident houses is under fire for joining disgraced Hollywood mogul Harvey Weinstein's defense team.

Ronald S. Sullivan Jr. is a former public defender who's helped to secure the release of over 6000 falsely imprisoned people. He's a legal hero, which at an institution like Harvard you'd think would gain him substantial social capital. But it doesn't work that way anymore. When you've pushed some students’ hot buttons by choosing to represent America's number one pariah, your slate’s wiped clean.

Now the African-American legal crusader who's devoted his career to helping the disadvantaged is just another guy making some students uncomfortable about having him as the dean at Winthrop House, where he has a pastoral duty as a live-in resident. Sullivan's said that the work of attorneys is not ideological, and they cannot be equated with their clients, which is undeniable under the principles of American jurisprudence. We're constantly reminded that Harvard represents the crème de la crème of American society, so is it too much to expect that its leaders-in-training would grasp this concept that perhaps the party boys and girls at a place like Florida State might be expected to struggle with?

On the petition calling for removing Sullivan from his dean's position, one befuddled person asked his fellow students if they want to accept their diploma from someone who believes it's appropriate to defend the most prominent #MeToo villain of them all. “Defending” someone in court isn’t tantamount to defending their alleged crimes. It's the provision of a legal right guaranteed by the Sixth Amendment. Emergency room doctors will try to save the life of a mass murderer, not because they're soft on crime but because that's their job that they've taken an oath to uphold.

These are adult concepts that strip away the clouding element of emotion, so they require a measure of intellectual rigor to grasp. Such discipline's missing from the 270 people who've signed an online petition calling for Sullivan to resign from his dean position, those spray painting “Whose side are you on?” on Harvard buildings, and the dozens of protesters who marched in front of administration building.

The dean of Harvard College, Rakesh Khurana, issued a statement confirming that the right to a vigorous defense is a cornerstone of the justice system, but then announced that Harvard would be conducting a “climate review” of how students at Winthrop House were reacting to Sullivan’s representation of Weinstein. If the presumption of innocence is the pillar of jurisprudence that Khurana claims, why would such a review be preferable to the school's educators teaching the dissenting students on this matter?

Some students have talked about how Sullivan, as the dean of their residence hall, has interfered with their sense of “safety.” This is a misuse of the word “safety,” which doesn't involve the protection of delicate sensibilities imbued into young people by helicopter parents. This corrupted new definition of the word is antithetical to the highest purpose of a university—fostering an atmosphere of free inquiry—meaning that universities need to make a point of not accepting it from their students. Being around someone with different views than your own does not mean you are not safe. It means you're alive.

Other students have said they wouldn't feel comfortable going to their dean if they'd been sexually assaulted. Given Sullivan's long history defending those in need, this complaint is odd, but the professor has provided the name of another faculty member that students can choose to go to in such cases. Case closed on this objection.

You could criticize Sullivan for going along with a system that allows wealthy people to buy the best defense, but it's not his system. Additionally, the more high-paying clients he takes on, the more pro bono work he can do. Dean Khurana should talk about Harvard alum John Adams, who risked his career by representing British soldiers accused of killing five in Boston in 1770.

The American criminal justice system only works if the most unpopular are defended in court. Certain Harvard students should look beyond themselves. It's not about them all the time. The school's officials should be firm and guide them through this process, which is their job. Ronald Sullivan's come too far in life to be treated this way.