The Troubling Rise of the LGBTQ Right

Milo Yiannopoulos is just the most prominent example. 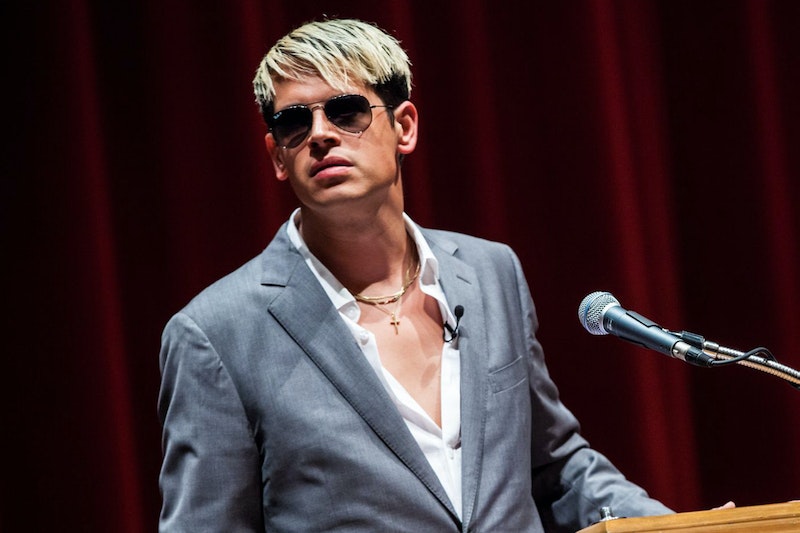 Helen Pluckrose’s article, “The Problem with Intersectional Feminism,” brings up a common criticism, which is that not everyone within a marginalized group has the same political views. “In the US,” she writes, “the number of Americans identifying as liberal reached a record high of 24% in 2015 in comparison to the conservative 38%. Britons are almost evenly divided between left and right. Women are generally somewhat more likely to be left-leaning than men but very many are not. 47% of African Americans identify as liberal and 45% as conservative.”

While I understand that not everyone shares the same views due to personal experiences, I still can’t understand why some of my fellow LGBTQ people are conservative. I don’t think being conservative automatically makes them “less queer,” but given the Right’s history of homophobic and transphobic policies, being a conservative LGBTQ person sounds like being a vegetarian butcher to me. What’s even more confusing is the sudden rise of LGBTQ people among the Right.

Arwa Mahdawi writes about this in a recent Guardian article, especially among “gay, white, and financially well-off men.” The most notable example of this is Milo Yiannopoulos, who referred to President Trump on Twitter as “daddy,” publicly made fun of a trans girl at a college, and infamously defended his transphobia on Bill Maher’s show. Most recently, he told Australia to vote no on marriage equality, even though Yiannopoulos married his boyfriend just a few weeks ago. Yiannopoulos may be the most recognizable right-winged LGBTQ person, but he’s not the only one.

Mahdawi also mentions Chadwick Moore, a gay New York-based journalist who “came out” as conservative in the New York Post in February. Although he voted for Clinton in the 2016 election, he switched teams following the backlash against his interview with Yiannopoulos for Out. “It can seem like liberals are actually against free speech if it fails to conform with the way they think,” he writes. “And I don’t want to be a part of that club anymore.” In fairness, Moore doesn’t agree with all of Trump’s policies, like the Muslim ban and his cabinet picks.

Much has been said about the rise of right-winged YouTubers, a list that includes trans women Blaire White and Theryn Meyer. White, who has 352,851 subscribers, thinks Black Lives Matter is a hate group, feminism is cancer, being trans is a mental disorder, and that allowing trans kids to transition is child abuse. Meyer, who was born in South Africa but now lives in Canada, has over 42,000 subscribers and is an outspoken Men’s Rights Activist. She’s best known as testifying against Canada’s C-16 bill, which she claimed would get people fired for misgendering trans people (not true). Both women claim that transitioning made them aware of, according to Meyer, a “narrative that always puts women into a victim status and men into an oppressor status.”

As to why there’s a sudden rise of LGBTQ conservatives, I don’t know. It could be a reaction to the so-called Regressive Left, or maybe it’s another example of racism within the LGBTQ movement, or maybe neither. Still, I wonder why, given Trump’s support of “religious freedom bills,” any LGBTQ person would support him.