Taking the Long View on Trump

In every abyss a deeper abyss. 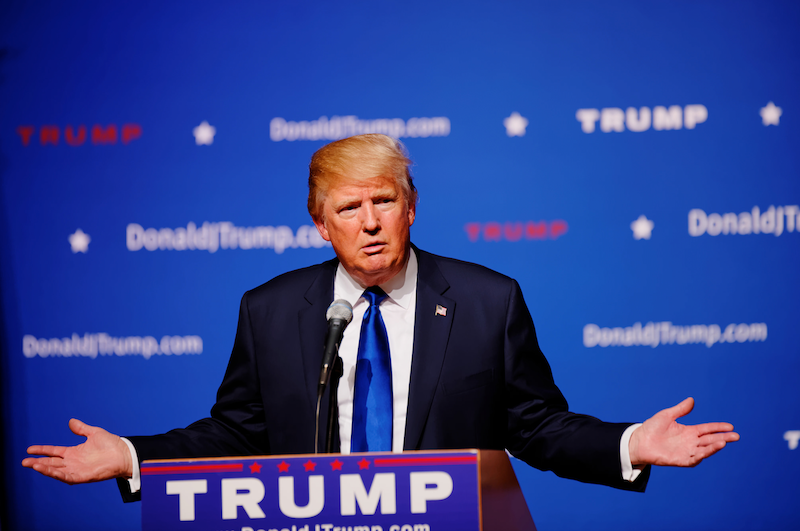 Last week I read that Donald Trump called the White House press pool in for an official photo with military leaders and their wives, after which Trump asked: “You guys know what this represents?” When the reporters said no, Trump told them “Maybe it’s the calm before the storm.”

I’ve no idea whether that’ll turn out to be foreshadowing, and if so, of what. But this is par for the course with Trump, who is a difficult man to figure out. The strategy I’ve developed: don’t bother trying. Don’t focus on what he’s doing right now. Pull back and look at him in a broader perspective. It’s only when you zoom out that you can see a shape to events.

Like almost everyone else in North America, I’ve watched Trump these past couple of years stagger from episode to episode. Was he conjuring controversy out of nothing for the sake of distracting people from other things he was doing? Were we seeing acts of political prestidigitation like a splenetic stage magician: Don Rickles crossed with Criss Angel, escaping tanking approval ratings by running his mouth? In the end it doesn’t matter. Step back and it’s clear he’s playing a character: racist, sexist, belligerent, stupid, and ignorant, all taken to ludicrous extremes. He’s something out of a sitcom, Homer Simpson but mean-spirited, Archie Bunker but more cartoonish. In a scripted show, an American Yes, Minister, it’d be hilarious.

It demonstrates a kind of low cunning. Trump realized—at whatever level of consciousness—his act would play in real life. But he can’t break character, now, even if he wants to. I doubt he does, but the point is that his shtick got him where he is, and now he has to keep it up. The character has no room for growth. He’s got to keep giving the audience what it craves.

Still, the more American nightly news shows turned into an avant-garde sitcom the more I wondered why the act worked. Step back further, I thought. Take a long view. Fox News had been cultivating an audience for a couple decades by the time Trump ran for the nomination. So had right-wing talk radio. Media outlets that thrived on controversy: on having something to be against. The more to the right the Republican base of straight white men went, the more the right-wing media thrived. Trump was the guy who saw where this was going, saw how far it had already gotten, saw that one of the things that base was against were the guys who lived and moved in the Washington political world. Even if the guys in suits were Republicans.

The nature of democracy and governance meant that radicalism didn’t work well as an administrative approach. Which meant that elected radicals swiftly became less radical. Which meant the base believed that the Washington political structure had domesticated a lot of the guys they sent to blow up Washington, and in a sense they weren’t wrong. Trump ran and won, in part, by convincing his base he’d turn the tables and domesticate the D.C. fauna instead of the fauna taming him. The more he shocked people, the more he said and did things unimaginably stupid in the eyes of the political professionals, the more his base believed in him precisely because the pros said what he was doing was wrong.

In every abyss a deeper abyss. In every answer another question, needing a wider frame. If Trump’s a creature of a self-propagating right-wing media complex, why did that complex have such success in America? Why did that cycle exist for Trump to identify it? Where did the audience always looking for ever-greater outrages come from? It’s fair to talk about Russia stoking the fires of nationalism throughout the west, fair to talk about a general rise of nationalism and anti-elite sentiment. But why’s it so advanced and so pronounced in the Untied States?

Pull back further. Look at the last few decades of American history and you see, by most metrics, increasing polarization between America’s two main parties. That’s often said to be a function of the struggles around civil rights, as conservative Southern Democrats left their party. There’s more to that story, I think, as on the American right imperialism merged with libertarian economics into an ideology standing athwart history, yelling stop. An inherently quixotic move: history can’t be stopped. But the sheer absurdity of the attempt fed on itself, building an increasingly cult-like world of self-reinforcing media structures, of think tanks and propaganda networks, insisting that global warming isn’t real and trickle-down economics works. They believe because it’s absurd. And because it flatters their ego and the sense that their inherited power derives from merit. The richest and most powerful elites of the richest and most powerful country on earth built a steel-reinforced echo chamber dedicated to convincing themselves of their own power, probity, and purity. Now the range of what’s thinkable has shifted in America to the point that there’s a Nazi sympathizer in the White House, and much of the mainstream media still tut-tuts about “civility” and “both sides.”

Looked at this way, Trump’s not an outlier. If he sounds self-deluded, that’s because he’s the product of a delusional system. He’s part of a weird feedback loop that’s been in place for a couple of generations. My guess is that loop has to do with the structure of American governance: a two-party system that’s also a system of checks and balances. Politically, Americans divide their politicians into the guys on their side (good) and the guys on the other side (bad)—and the bad guys get to check and balance the good guys. Frustration builds. The slow pace of change leads to a kind of nihilism, the wish to burn it all down, all the compromises and slowdowns.

If so, Trump was inevitable. Worse, if this is really systemic, then things are only going to get more extreme. Maybe the cycle’s already moved beyond Trump, if Roy Moore’s selection as Alabama’s Republican nominee for the Senate means anything. Trump endorsed Moore’s rival, Luther Strange, but has been moving to praise Moore, as though to co-opt any momentum Moore has, even while Steve Bannon declares war on the GOP.

When you talk about complex structures you can always find more to say. This isn’t the whole story. It’s a start, maybe. An approach that makes sense to me, a way for me to construct a logical chain leading from Dwight Eisenhower’s military-industrial complex to Trump’s calm before the storm.