At least Larry Wilmore had something to say. 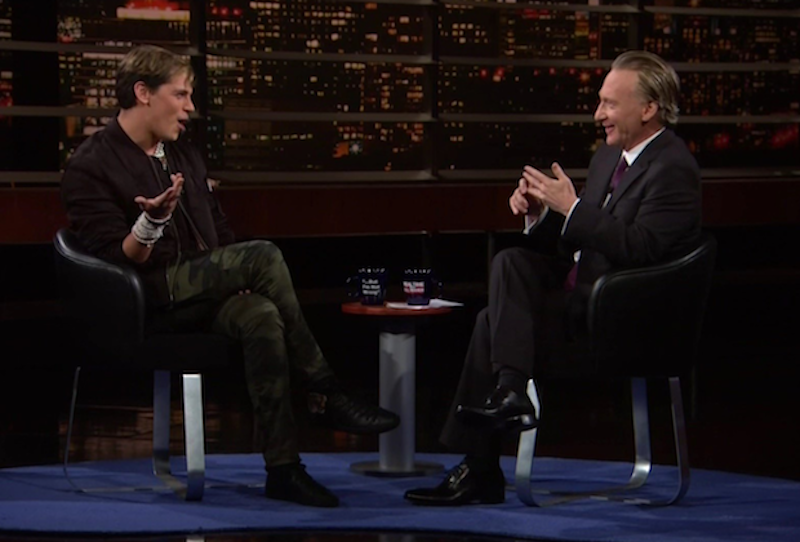 Breitbart editor Milo Yiannopoulos has generated enough negative attention to get invited onto HBO’s Real Time with Bill Maher. The perpetual cyclone of controversy that surrounds the provocateur was enough to inspire another of the show’s scheduled guests, Intercept co-founder Jeremy Scahill, to drop out. Scahill cited Yiannopoulos’ history of using his campus appearances “to publicly attack and shame ordinary people by name, a practice which could lead to violence or even death.” Maher replied that, “If Mr. Yiannopoulos is indeed the monster that Scahill claims—and he might be—nothing could serve the liberal cause better than having him exposed on Friday night.”

Yiannopoulos himself has made his name fueling the lefty outrage machine. Marketing whiz Ryan Holiday recently wrote that, “Niche players and polarizing personalities are only ever going to be interesting to a small subgroup. While this might seem like a disadvantage, it’s actually a huge opportunity: Because it allows them to leverage the dismissals, anger, mockery, and contempt of the population at large as proof of their credibility. Someone like Milo… doesn't care that you hate them—they like it. It’s proof to their followers that they are doing something subversive and meaningful… It imbues the whole movement with a sense of urgency and action—it creates purpose and meaning.”

The recent swell in controversy is over Yiannopoulos making more personal attacks than when I last wrote about him. At that point, he seemed like a conservative pundit who reveled in bad taste, like a John Waters character who learned about politics from Sean Hannity. However, his hobby of singling out transgender people for abuse has soured my already dim view of him. In response to a transgender student activist campaigning for expanded Title IX protections, Yiannopoulos projected a photo of the former student on a screen behind him, displayed her name, shared her dead name, and singled her out for ridicule. After this incident, attacking a private citizen, I don’t see the point in any school allowing Yiannopoulos a platform. In addition, he has also used Breitbart to target prominent figures in the transgender community, going so far as to accuse one of pedophilia. When Yiannopoulos was scheduled to speak at Berkeley, he wrote that he was there to “take down… ’sanctuary campuses…’” This led many to believe that he was going to use his appearance to name undocumented students and workers at the school.

With all of this in mind, I was disappointed in Bill Maher’s interview with Yiannopoulos, but I wasn’t terribly surprised. They bonded over being barred from speaking at Berkeley. Maher gave him a hard time over his Trump support: “For someone who loves free speech, you sure picked a weird movement.” I don’t think Maher really knew what to do with Yiannopoulos. When the conversation got unpleasant or awkward, Maher didn’t challenge him, he just changed the subject. It’s a shame, because I’d have liked a follow-up when Yiannopoulos said, “I hurt people for a reason, I like to think of myself as a virtuous troll.” Instead, Maher waxed poetic on protecting humor.

Maher capitulated on Yiannopoulos’ phony free speech crusade invoking some of Joan Rivers’ more brutal insults, which were directed at public figures. It’s an important distinction in the face of Yiannopoulos’ verbal attack on a private citizen in Wisconsin. From both a legal and moral standpoint, public figures are not immune from ridicule. Even then, harassment isn’t protected speech.

The really good stuff is in the “Overtime” segment, when Yiannopoulos joined the panel with comedian Larry Wilmore, intelligence expert Malcolm Nance (who filled Scahill’s slot), and Republican congressman Jack Kingston. The first question was about the incident in Wisconsin. The discussion quickly became heated, especially between Wilmore and Yiannopoulos, with the latter trying to defend his actions by attacking the mental health of transgender women, talking about it in a way that suggested he forgot the video of that speech exists. Wilmore countered that his arguments were similar to attacks on gay people, “treating them like aliens who just wanted to fuck anything that moved, and that’s why we should avoid them at all costs.” When Yiannopoulos expanded his argument to say that gays are also confused about their sexuality, Nance asked a question that stopped him in his tracks: “When we were talking about confusion, were we talking about you? Because you seem to be very confused about who you are and what you are.” Yiannopoulos insulted Nance and accused Maher of inviting guests who are stupid, inspiring Wilmore to tell Yiannopoulos to fuck himself. Maher defended Nance, both intellectually and professionally, and Kingston tried to make peace.

Later, Nance tried to make sense of Yiannopoulos’ role in the alt-right. He replied that this is “one of the enduring mysteries of American media,” and disassociated himself from it, citing his homosexuality, Jewish heritage, and black boyfriend. But there’s no mystery why Yiannopoulos is continually associated with the alt-right; it’s because he sang the movement’s praises in an article he co-authored for Breitbart. He’s right that the more “white power” oriented websites hate him for being gay and Jewish, but Yiannopoulos created this association himself.

As for Maher’s interview, I think he saw a kinship in Yiannopoulos being on the same side in the campus free speech wars. It’s sort of poetic that his most notorious block from speaking happened at Berkeley, the ascribed birthplace of the Free Speech Movement. What’s forgotten is that the movement was to bring political activism to campus. Because Yiannopoulos has been invited to speak by conservative student groups, this Brit is already a beneficiary of the American Free Speech Movement.