The Newnew Left and the Principle of Hierarchical Coincidence

There’s one breathtaking theoretical and practical problem with classical socialism. 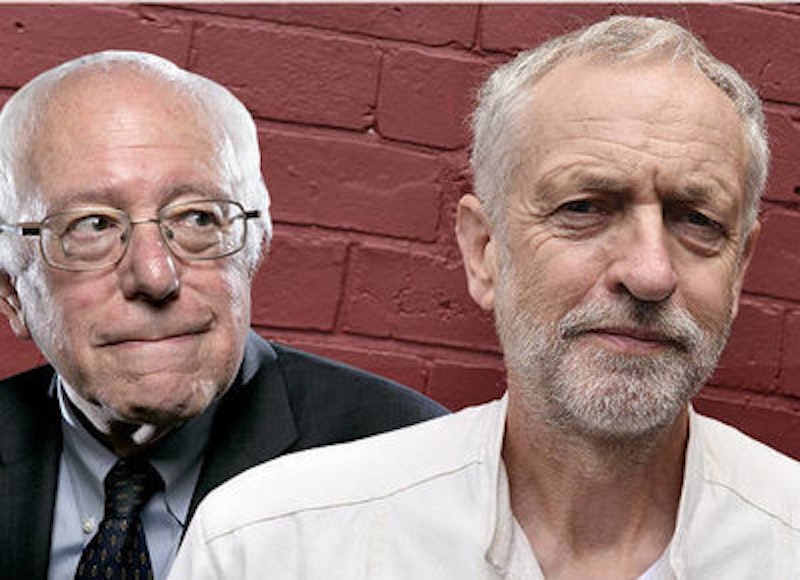 Jeremy Corbyn and Bernie Sanders seem to represent a new and more radical leftism in mainstream electoral politics: a resurgent socialism, particularly among young people. The Trump disaster is liable to keep this movement energized and expanding, perhaps to places like the White House and 10 Downing Street. It's a fresh cultural phenomenon. But it represents an amazingly old-fashioned politics, well symbolized by these old guys who came by their ideals in the 1960s.

The classical socialism of people like Corbyn and Sanders had been developed, in detail, by the middle of the 19th century. It was designed as a response to the rise of rapacious industrial capitalism, and it specifically proposed to rein in capital by vast expansions of state power, or the annexation of more and more resources, powers, segments of the culture by government. Since then, the left’s been largely impervious to intellectual development, though the identity politics of the moment is not itself entailed by classical socialism. Indeed, centralizing race, gender, and orientation is incompatible with the exclusive emphasis on class in figures such as Marx, and I don't think anyone has reconciled these, despite many semi-sincere attempts. The concrete proposals amount to increased state control of many or even all segments of human life, from cradle to grave.

I think you're going to need some new ideas, because there’s one breathtaking theoretical and practical problem with classical socialism. It proceeds in massive unawareness of a fundamental principle in political theory and political reality, which I call the principle of hierarchical coincidence (PHC): the idea that, in more or less every case and in the long run, political and economic hierarchies tend to coincide. Economic power leads to political power; political power leads to economic power.

This can run in either direction, and is surely among the most obvious of phenomena through all of political history, seen in everything from wars of economic expansion to regulatory capture. There may be the occasional example of a non-wealthy political leader—Gandhi, for example. But in establishing a new political hierarchy, Gandhi also helped establish the shape of India's current economic hierarchy, driven in part by his Congress Party.

As a rough general principle, we all know PHC to be true. If you ran into a white supremacist polity, for example, in which people of color were wealthier overall than whites, you'd be extremely surprised, I hope. For this reason, and for the most part and in the long run, ever-increasing state power as recommended in socialism will tend to increase rather than ameliorate economic inequality. And though governments do sometimes and to some extent reduce economic inequality, they do so in a situation in which the seemingly intractable political/economic structure is largely produced, held in place, and enforced by these governments themselves. The structure of economic inequality rests to a large extent on political and police power, and certainly couldn’t be maintained without it.

This is the incoherence at the heart of classical socialism: that intensifying political power, at least of a certain kind, will in the long run reduce economic inequality. But if you start “nationalizing” or “socializing” various segments of the economy—that is, if you give these powers to the state—you don't move toward an egalitarian paradise, you simply create a new ascendant class. This isn’t a mere theory. Consider China: the Communist Party tried to annihilate every other center of political or economic power, and now Chinese political and economic hierarchies coincide almost perfectly. That’s a pretty good definition of “totalitarianism.”

The right of the moment isn't doing any better than the left on this, though the position is less internally incoherent. Note that the former just put the CEO of Exxon-Mobil in charge of American diplomacy. But, on the other hand, the right isn't pretending that the purpose of the whole thing is human equality. Still, when Exxon runs the world, you’re not going to be free. I'm not sure that rule by the Chinese communist party and rule by Exxon are different, and I'm not sure, as a practical matter, that Rex Tillerson's and Bernie Sanders' Americas would look all that different. The basic differences are rhetorical. And the rhetoric makes no sense.

That’s what socialism actually proposes, insofar as it proposes simply to collapse economic and political power with a good conscience: to make it explicit and a matter of principle that the people who control the prison system and the power to tax, the military and the surveillance state, should also supervise more or less every exchange made in the whole society, that the government should be your source of food, housing, education, art. Once it does all these things, the political/economic hierarchy is implacable, seemingly permanent, a baseline condition of life, intensifying through the generations, irresistible.

The first thing to do is ditch various fictions and fantasies about government: that its actions are the actions of all of us together, or that the will of the political leadership is the will of the people as a whole. Rather, a government is an actual group of people (along with inanimate objects: office buildings and hard drives, weapons and internment facilities). Those who are in a position to control or deflect the power of the government have the political power; those who are not do not. The former, as a group and as individuals, will annex more and more of the economic resources of the society. Then the monopoly of violence on which state power rests will coincide perfectly with the structure of economic hierarchy; the power of the gun will be identical to the power of cash money, and resistance will be futile.

That isn’t what people like Jeremy Corbyn and Bernie Sanders think they want. It's not what they say they're proposing. But it is what they are proposing. And in general, if today's young leftists actually intend to reduce inequality of any sort in the long run, they’re going to have to finally get out of the 19th century and try generating some ideas.