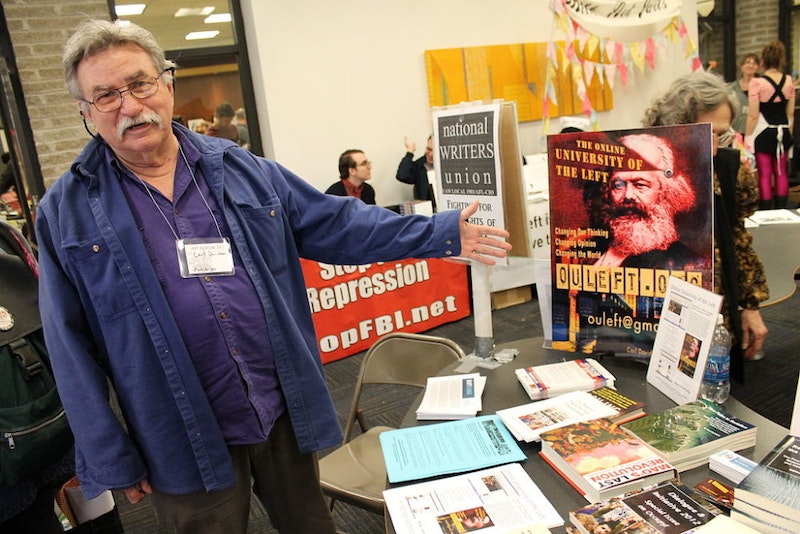 The Left Forum took place last week in New York City. This is an annual confab of Marxists and left-wing anarchists of different varieties. In past years, they’ve gathered in a series of plenaries to discuss diverse topics ranging from the Russian Revolution to Mexican politics. While in other years, left-wing academic celebrities like Zizek or Cornel West were central parts of the event, this time many panels had tiny socialist and communist outlets of which the majority of mortals probably have never heard.

In attendance were the Posadists––a Trotskyist organization that sounds more like science fiction comedy than a revolutionary cadre. Their name comes from the founder of this peculiar form of Trotskyism, the late J. Posadas, who was an Argentine who believed that extraterrestrial beings are communists. His followers think that intergalactic travel could only be developed by a communist society, so they believe that if there are aliens able to travel the cosmos, they are logically commies from outer space. Their own annual event is hosted by the aptly named Intergalactic Workers' League.

But perhaps the surprising panel––and the one that generated a lot of negative buzz on social media––was a panel against transgender rights. Apparently, there are some people who think trans people are part of a plot by biotech corporations to utilize non-transgender gay people as lab rats. The Left Forum organization apologized for the incident, saying it was an unapproved panel proposal but there are screenshots from their website before it was taken down. To be fair, there are a variety of feminists who express disagreement with people in the trans movement. However, in this particular case, the group behind the panel sounded more like Alex Jones conspiracy peddlers than radical second wave feminists. If this wasn’t crazy enough, Left Forum also initially booked Anthony Hall, a known Holocaust denier, as a speaker, but under pressure, they canceled his panel and others dealing with 9/11 and allegations of false flag attacks.

Previous editions of the Left Forums hosted some strange groups, however there were also some interesting panels on issues like Georgism––which is a relatively free market form of leftism––or anarchist criticism of state power.

Given the fact that Sen. Bernie Sanders surprised nearly everyone in last year’s election, there’s a lot of enthusiasm among radicals over how to keep the socialist momentum forward. It was natural that a lot of the panels were committed to talking about Sanders from a positive perspective. Although there was a whole panel critical of Sanders for his relatively hawkish foreign policy in Syria, it was organized by the Workers World Newspaper, which has supported North Korea, so they're hardly pro-peace if they’re supporters of a murderous regime.

Not all the speakers and attendees of the Left Forum are conspiracy theorists or followers of Kim Jong-un, but their presence was disturbing. There were some interesting, credible speakers like journalist Jeremy Scahill of The Intercept, the antiwar activist Kevin Zeese of the Green Party, and the diplomat-turned-anarchist Carne Ross. Still, noble ideals from progressive radicals––that even libertarians and paleoconservatives could share––like a restrained foreign policy and opposition to corporate welfare, ended up as second tier to a lot of panels focused on defending Third World dictators or arguing for space communism.

—Camilo Gómez is a Young Voices Advocate and host of the Late Night Anarchy podcast. Follow him on Twitter: @camilomgn.