Anti-Sharia Vs. Antifa in the Streets

Neither side has a coherent plan, but they like the drama. 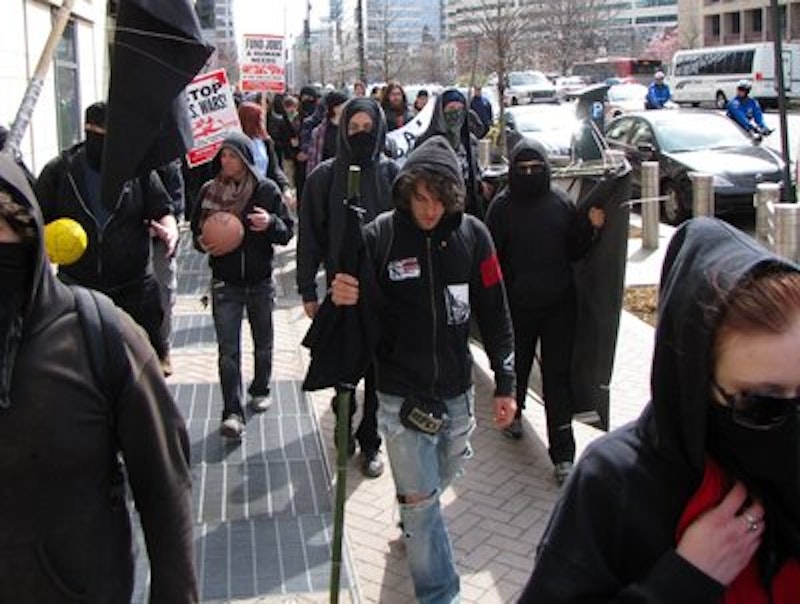 A small, but vocal, minority of Americans fear the U.S. legal code is in grave danger of co-optation by Islamic law, known as sharia. On Saturday, with the "March Against Sharia" rallies held across the country, anti-sharia activists voiced their concerns. Representing the pro-sharia, anti-bigotry side, the masked far-leftists showed up to greet them, as they always do.

It's unclear how many of the protesters, outside of a faction prone to Alex Jones-type conspiracy theories, actually believe sharia's about to be codified into law. The U.S. hasn’t lost its way like the U.K., which has allowed 85 sharia courts to carve out a Qur'an-friendly legal niche separate from its own justice system. Trump's in office and Islam’s in the crosshairs now, but organizing an anti-Islam march isn't politically viable. Sharia serves as a convenient proxy.

Some of the impetus behind the demonstrations is prophylactic in nature. A great fear among Trump supporters is “creeping sharia.” If you're worried that your country is sliding into U.K. territory, then you make a lot of noise to get the issue out there. Nobody on the left will ever raise the question. People see photos of school children bowing in Islamic prayer and get concerned about their own offspring being subjected to religious indoctrination in the name of diversity. Molding young minds has made Islam the world's fastest growing religion, which is far from a positive trend, unless you think human rights isn't a major issue.

The “anti-fascist” antifa who show up whenever Trumpists gather publicly never fail to demonstrate how fond they are of the tactics of fascist intimidation. Punch a Nazi and you're a hero, but it's hard to see much courage in people who show up to counter fascism with their faces covered. Was anyone surprised when “Nazi” soon came to mean anyone with an opposing opinion, and throwing urine on these sub-humans also became part of the program? That's what an antifa did to right-wing journalist/activist Lauren Southern when she attended the anti-sharia protest in NY City.

It's easy to laugh at the anti-sharia marchers who’ve been stoked up by the likes of rabid anti-Islam activist Pamela Geller, who’s always wailing at high pitch. Still, their heads are in the right place in the sense that sharia is antithetical to Western values. It's true sharia presents no present threat in the U.S., but their protests can be viewed as a justifiable reaction against sharia as a worldwide phenomenon. Since once-secular Turkey is quickly descending towards a theocracy and “moderate” Indonesia is prosecuting major politicians for insulting the Qur’an, more demonstrations are in order.

They're needed, in part, because the left has abdicated its responsibility to stand up for the oppressed when Islam’s the oppressor. While Muslim activists and their brethren, the left-leaning apologists for Islam’s excesses, will assure you that sharia is merely a code of behavior for people who wish to observe their faith, that's a whitewash. In the name of sharia, a woman in a Muslim nation can get raped and be arrested for fornication. If that doesn't convince you, take a look at the list of the 10 nations where homosexuals can be put to death, based on an interpretation of sharia. Nine of them are Muslim-majority nations.

The left, crippled by its reactionary stance on the issue, is equally hapless in providing any unified message. Seeing Islam as under attack by Trumpists, its lame response has been to suspend all criticism—”Now's not the time to talk about it.” Instead, liberals defend Islam with even more fact-free passion than before.

Neither side squaring off in the streets has a coherent plan or real principles. It often looks like they're just spoiling for a fight with each other. Watch this video of the antifa trying to physically intimidate a YouTube journalist who’s just trying to cover their march. White pride groups like the Proud Boys are now providing security details to fend off the violence-worshipping leftists. As the truth becomes more obscure, words become less useful. Get used to seeing America’s worst battle it out in the streets.