The Celebration of Progress

What I'd like to see in tonight's State of the Union. 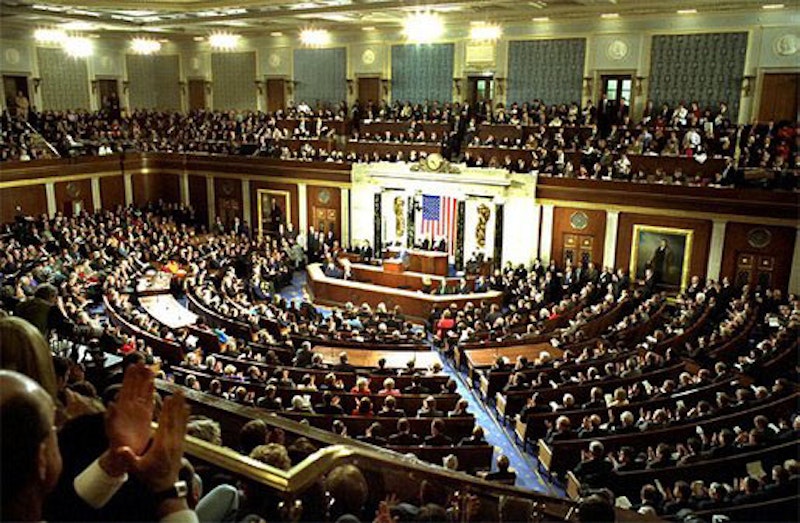 Tonight’s State of the Union is a crucial one. It unofficially kicks off President Obama’s reelection effort (perhaps you’ve noticed the thorough reshuffling of senior staff into a campaign-centric formation); it follows both Obama’s solid resurgence in the polls as well as a horrific act of domestic violence that claimed the lives of six people, including a Federal judge and a nine-year-old girl, and put a congresswoman in critical condition.

The House of Representatives, flush with freshman with a low-wattage understanding of the Constitution, voted to repeal the Patient Protection and Affordable Care Act by a wide margin. Unemployment stubbornly stays above nine percent. Obama’s surge in the polls reflects a generally positive mood: the public believes things are going to get better.

Despite the call for a cooling of political rhetoric, we still see such ideologues as Michelle Bachman claiming America is “under attack.” The cognitive dissonance of Republican politicians and pundits alike is relentless, maddening, inescapable. And so the State of the Union comes at a time when clarity of direction is crucial, when sober talk will stand in stark contrast to the shit flingers of all stripes.

I’d like to hear the President  articulate his left-of-center, pragmatic governing philosophy in digestible terms. A crude way of discerning America’s two major political ideologies is to look at how each side views the role of the Federal government. The Right loves to echo the famous Ronald Reagan axiom, "Government is not a solution to our problem, government is the problem.” The Left sees the Federal government as a necessary instrument of calibration—be it poverty, education, or warfare, central government can be, has been, and will be a force for good for millions of disenfranchised peoples.

I’ve written before—and continue to believe—that I don’t view my largely liberal beliefs as a silver bullet. Sometimes tax rates need to be low; public education is in drastic need of comprehensive reform; a good deal of counter terrorism exists outside of historical parameters of executive power; the private sector is unfailingly efficient at what is called regulatory capture—basically subsuming Federal regulations and regulators to its own ends, despite government’s best intentions.

The list can go on in either direction. In American politics and government, there is never a perfectly correct answer nor a perfectly incorrect answer. When there is, it almost always involves either Nazi references or flag-draped caskets. I think of the second clause of the opening line of the Constitution’s preamble: “in order to form a more perfect union.” A more perfect union is never perfect; it is in need of constant vigilance, in need of partisan debate and political bomb throwing. Lines are drawn and erased and the great debates of yesteryear are the present’s everyday realities.

Whenever you see the aforementioned Reagan quote appear, halo like, in conservative talking points and publications, the preceding four words are invariably clipped off: “In this present crisis.” He wasn’t speaking into the great infinity-and-beyond of American history. He was speaking to the times. And whether you agreed with him then or not, that phrase—“ in this present crisis”’—speaks to the malleability of governing ideologies.

President Obama’s agenda has reflected a pragmatic, left-of-center agenda (with the exception of his counter terrorism policies which, despite Marc Adler’s apologizing on this website, are still dangerously over the line) in line with the Left’s historic approach to the ills facing our country: for better and for worse, government can and will alleviate the most pernicious inequalities in our society, some of which exist because the free market is anything but free and the status quo is one where money—and the access to education, health care, and upward mobility that come with it—is the engine of success. The Haves have; the Have-Nots have not.

Inequality isn’t a finite problem; it will always exist to one degree or another. But the Left is the party that actively attempts to alleviate the great inequalities of the present day—access to health care, systemic racism in local and federal government policies, the availability of good public education. The Right, whether as the Party of No or the Party of Segregation, refuses to deal with society in society’s own terms. Republican punditry and talking points reflect a sterile, static view of the issues facing the public—tax cuts are, seemingly, the answer to any- and everything. They reflect a blinkered nostalgia for decades of low marginal tax rates, despite the parallels of rampant disenfranchisement of women and minorities. They reflect a false libertarian ideology (the Right willfully ignores the billions of dollars wasted on farm subsidies, and yet sees the NEA, the NEH and PBS as a deficit-busting pariahs) that finds traction in xenophobia, dog whistle racism and historical perversion. It’s why the South is peppered with statues of Nathan Bedford Forrest while hosting few, if any, equivalent monuments for African Americans.

In this present crisis—the great recession, the escalating costs of health care and education, Wall Street’s artificial financial architectures—the Right refuses to address what is right in front of our noses. I want to hear President Obama address the division of governing ideology as a way of defending his past agenda that has decreased the gender salary gap; brought the country back from the brink of economic collapse; expanded health care coverage while reducing the deficit over the long term; taken another small but crucial step in dialing down nuclear armament; and tackled a financial industry that is in some ways as big a bubble as the housing industry that brought the country to its knees more than two years ago.

It’s not as if there is nothing to be gleaned from conservative policy. Health care reform is extremely business friendly and follows the very much Republican model vindicated by the state of Massachusetts under the stewardship of Mitt Romney. Obama hasn’t taken the United States any closer to socialism than it was before his election, and he’s won’t have brought it any closer when he leaves office.

Tonight’s State of the Union needs to make clear the distinction between the two political parties. One refuses to compromise, seeing policy in black and white terms; the other forges ahead, attempting to reform and change a system that disenfranchises so many. It’s an imperfect road, but at least one party hews to it, and I want to see the President celebrate that progression.