Who finally pushed him off MSNBC? 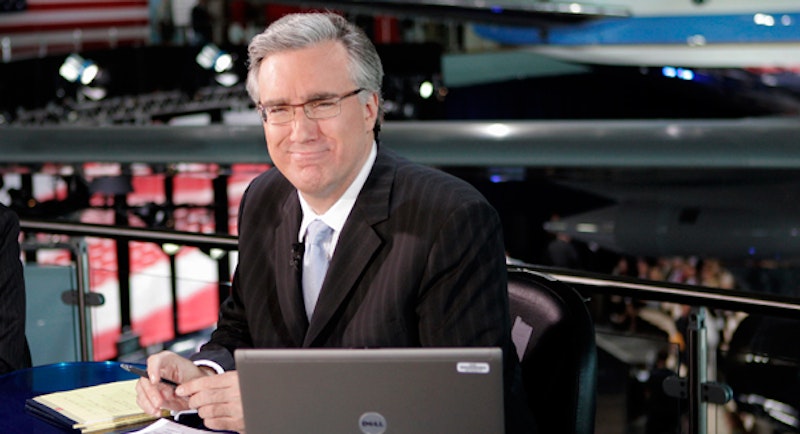 The dust is still settling over Keith Olbermann’s abrupt exit last Friday from MSNBC and his Countdown show. Initial reports were that Olbermann had simply decided to quit the program after nearly eight years—the sort of impetuous move that would be unthinkable with practically any other high-profile talk-show host, but had long been established as one of Olbermann’s regular M.O.s.

Over the weekend it became clear that Olbermann didn’t actually jump, but that he was pushed. The remaining question—and one which isn’t likely to get a definitive answer soon, if ever—is: Just who did the pushing?

Olbermann’s not talking, and according to The New York Times he’s legally prohibited from doing so, under the terms of the termination agreement that he and MSNBC apparently negotiated for weeks before finalizing it just hours before that last broadcast on Jan. 21. According to the Times, Olbermann is prohibited from popping up on some other network for at least a year (though radio and the Internet remain viable alternatives).

The timing of Olbermann’s exit, coming in the same week that saw the long-awaited approval of Comcast’s takeover of NBC Universal, is cited by some as proof that the cable operator’s fingerprints are all over the move. But that doesn’t quite ring true. Comcast may be run largely by a bunch of political conservatives, but the fact remains that Countdown was the cable network’s biggest hit—and business almost always trumps politics in this landscape.

The more likely culprit is NBC News president Steve Capus, who’s been biding his time at least since last November’s incident wherein Olbermann was revealed to have made political donations to several Democratic candidates—activity prohibited by NBC. What got Capus’ goat wasn’t so much the donations themselves—for which Olbermann received an “indefinite” suspension that turned into two days, courtesy of MSNBC’s milquetoast president Phil Griffin—but that, when he returned to the air, Olbermann apologized to viewers, but not to his MSNBC overseers.

Of course, that’s not how a self-styled maverick like Olbermann plays things, but Capus isn’t Griffin, and NBC isn’t just MSNBC. The two properties have struggled for years to find a happy co-existence, largely to little effect; the late Tim Russert and, to a lesser degree, David Gregory may have been able to straddle both networks, but many at NBC News have always looked (often justifiably) at their sister network as weak, one that instead of rising above Bill O’Reilly-style shenanigans wades right into the same muck.

Exhibit #1 was, of course, Olbermann, who made poking relentless fun at O’Reilly’s bombast a top priority. With O’Reilly’s star now (at least somewhat) eclipsed by Glenn Beck’s—and with Stephen Colbert providing a much wittier counterpoint to O’Reilly’s worldview—Olbermann has increasingly been flailing about looking for suitable targets. There was Christine O’Donnell, and evidently there’ll always be Sarah Palin, but one sensed that bullying them wasn’t quite as much fun as beating up on Bill.
Olbermann’s made something of a career of, rather than fading away, blazing out gloriously. He exited his first high-profile gig at ESPN under a cloud of recriminations (“He didn't burn bridges here,” recalled one ESPN staffer. “He napalmed them.”) He first popped up on MSNBC as host of The Big Show, a sort of dry run for Countdown that evolved into “White House in Crisis” when the Monica Lewinsky controversy broke.

That change gave him the “dry heaves” and would “make me ashamed, make me depressed, make me cry,” he announced during a Cornell commencement address (and, really, what better time and place to make such remarks?), so he left the network and took his act to Fox Sports for a couple of years. But going back to commenting on pennant races was never going to satisfy someone who by now had experienced what being a cable network tastemaker could be, and by 2003 he was at MSNBC with Countdown.

Until last Friday. As the Times piece notes, the severing of ties with Olbermann comes one year to the day that NBC broke up with Conan O’Brien. The big difference here is that the O’Brien/Jay Leno debacle was largely the responsibility of would-be programming wizard Jeff Zucker, who was a pretty staunch Olbermann supporter. Zucker himself was finally shown the door last September, though he didn’t officially leave the premises until … last Friday.

And that’s the key to what happened to Olbermann. With his biggest defender at the network out the door, the writing was on the wall, written in indelible ink by Capus.

How and where Olbermann shows up again is impossible to guess—might the increasingly goofy Roger Ailes give him a shot at one of Fox’s lesser outposts?—but he’ll be back soon enough, probably using inappropriate forums like commencement addresses to explain how he was done wrong, yet again.