The Secret of Tara Stiles

You won’t find it in The New York Times. 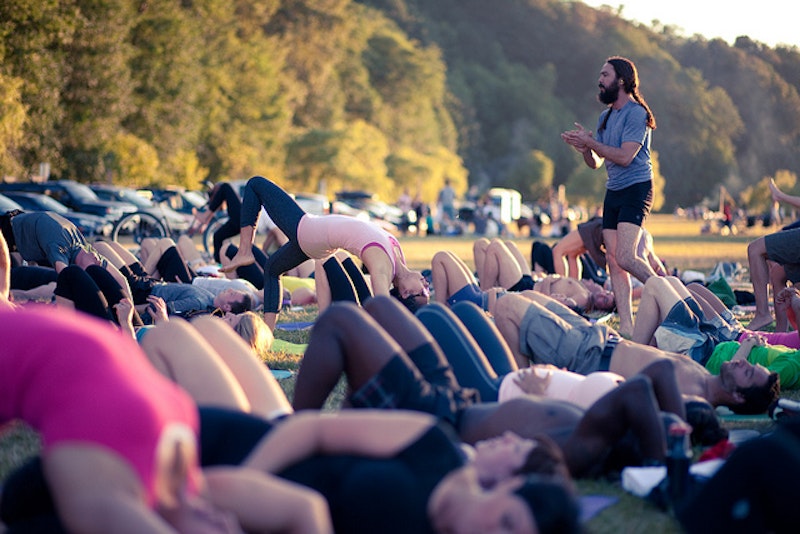 There’s a very hot woman in Manhattan who teaches yoga. In fact, I would bet there are several, but this one was profiled by The New York Times. Her name is Tara Stiles and there is something special about her approach to yoga, special enough to make her both beloved and reviled, special enough that Deepak Chopra’s a fan and Jane Fonda pushes her DVD. Except it’s hard to figure out what this something might be. Read the Times article and you’ll be stumped, at least if you’ve been to a few yoga classes. It’s the kind of journalism that makes less sense the more you know about the subject.

Here’s the problem. The defining traits of Stiles’ approach, as described by the article, are trivial: no chanting, no Sanskrit, nothing about spirituality. You don’t go om, the teacher says pushup instead of chaturanga. Stiles “focuses on the physical and health aspects of yoga,” the article tells us. What else is new? I take my yoga classes in the local gym, and they all focus on the “physical and health aspects of yoga.” That’s why they’re in a gym. Five different teachers, and the most spiritually oriented of the bunch devote 15 minutes out of 200 to chanting and spiritual growth. The rest of the session is all movement and poses, and the other teacher’s classes are pretty much nothing but. All right, that’s the gym, but it was the same story in the Iyengar studio where I spent eight months or so during the 1990s. Such is the way of most yoga classes. The stuff is treated as Asian Pilates with the om business as garnish. The distinguishing trait of the Stiles approach, apparently, is a complete absence of parsley. Is that really such a difference? The article lets us know that “purists” are revolted by what she’s up to. But those same purists may be revolted by most yoga classes being taught in North America. If so, and judging from my experience, I would say that was their problem. Either way, big deal.

What is Julia Stiles up to? “She is going for the firefighter from Long Island who feels intimidated by ‘oms’ and New Age music,” says the Times. “The African-American 30-something from Brooklyn who is looking for a little diversity on the mat. Or the cashier from Morris, Ill. … who drives to McDonald’s for dinner several times a week.” All right, are blacks and the working-class really that skittish about freaky foreign trappings? I doubt it, and at any rate the point must be proved, not assumed. The Times does nothing at all to back up the claim that Stiles is reaching out to non-whites and the working class, or the idea that her approach to yoga would be a good way of doing so. In fact the Times reporter talks to just one of her students, and this person is white and “works as a consultant for nonprofit organizations.” The student says the great thing about the Stiles operation is that classes aren’t full of “26-year-old former dancers.” Believe me, most yoga classes aren’t, and what does that have to do with the use or non-use of chanting?

The piece strikes me as a big put-up job. The story is this gorgeous girl with the goofy charm, but you can’t just say that. Something respectable is needed, so the girl’s selling line is treated as gospel. Think of all the people in the Times newsroom who go to yoga classes. They know the chanting is no big deal. Think of all the Times readers who know the same thing. But everyone agrees to stare past their common sense and pretend this nonsense hangs together. Reading the article makes me glad I know so little about public policy and national defense.  If I knew more, I wouldn’t read the news at all.