Toward a More Ethical Government

President Obama has successfully done away with most of the Bush Administration's immoral and unconstitutional practices. 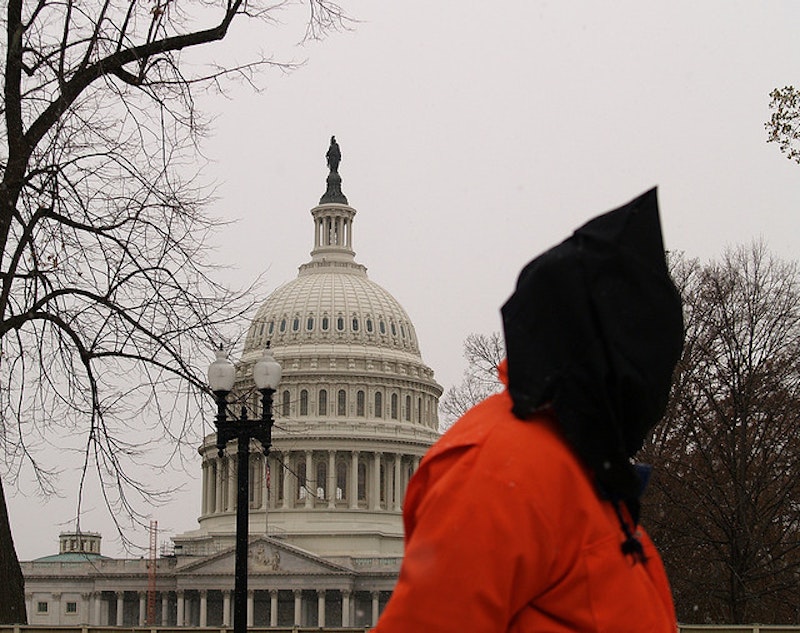 Two years into Barack Obama’s presidency, perhaps his single most significant, and underappreciated, accomplishment is his dramatic reversal of George W. Bush’s extraordinary rendition and torture program. In the epilogue to The Dark Side, Jane Mayer’s indispensable book about how the Bush administration subverted the Justice Department and broader legal system to conduct its war on terror, the author explains that before the 2008 election she bet that it would take at least 50 years until a president would dismantle Bush’s legal framework because of the political risk of being called “soft on terror” and the temptation to uphold virtually unlimited executive power.

Within two days of his presidency, however, Obama signed an executive order banning torture and extraordinary rendition, calling for closing Guantanamo and CIA black sites, guaranteeing prisoners access to the International Committee of the Red Cross, and creating a task force to devise more civilized and effective means of trying suspects than military tribunals, which remained an option. On a broader level, he demolished the Bush administration’s entire legal apparatus by nullifying the torture memos written by John Yoo and co., asserting that the Geneva Conventions must protect all U.S. prisoners and that CIA interrogation adheres to the standards established by The Army Field Manual. And in a strongly symbolic act of policy, he appointed outspoken critics of torture to fill the position formerly held by Yoo (David Barron), head the Office of Legal Counsel (Dawn Johnson) and lead the CIA (Leon Panetta).

Leaving the ensuing cynicism from both the left and right aside, think about how important this is.  Before Obama, many regarded the post-9/11presidency as a borderline dictatorship: as Mayer explains, the Bush Administration abused the Justice Department by crafting memos legalizing torture and making it essentially impossible to prosecute anyone involved. Under this framework, the President could arrest anyone he deemed a terror suspect and “make him disappear” without any legal recourse. At least four prisoners were killed (Mayer PP: 257), countless were tortured (some were sleep deprived for 11 days, others were waterboarded, and many were chained to the ceiling wearing only diapers), and a shockingly large number were innocent (Mayer PP: 183-85).

Furthermore, the myth perpetuated by Bush that waterboarding forced Abu Zubaydah to divulge life-saving intelligence he had previously resisted is decisively overthrown by Ali Soufan, the FBI interrogator who has gone on the record as saying that, among other things, in early 2002 he used conventional interrogation tactics on Zubaydah to extract the revelation that KSM masterminded 9/11 before the White House forced him to hand Zubaydah over to the CIA to be tortured, at which point he provided “no actionable intelligence” that at best “wasn’t, or couldn’t have been, gained from regular tactics,” according to Soufan, who adds that in some cases torture “backfired” by forcing false confessions.

Because of his bold executive order alone, Obama’s presidency can be considered as important as Jefferson’s and Lincoln’s because it has restored basic Constitutional rights that had been violated in the foulest of manners. Certainly, Bush’s excesses equal if not rival those of Adams’ Alien and Sedition Acts, and they are as morally outrageous as the practice of slavery that was permitted until Lincoln’s Emancipation Proclamation.

However, one must nonetheless question the wisdom of Obama’s decision to avoid “relitigating the past” by prosecuting the previous administration for war crimes.  Most people have strong opinions about the issue.  But let’s bear in mind how utterly tricky it really is. On the one hand, many argue that as a matter of principle the President must pursue justice. In addition, the President’s refusal to publicly air the crimes and definitively put this dark moment behind us has arguably backfired by leaving room for Dick Cheney and conservative apologists such as Marc A. Thiessen to obfuscate the truth with their revisionist versions of the story.

At the same rate, however, pursuing prosecution would likely intensify partisan bitterness by creating a culture war in which conservatives accuse the administration of seeking vengeance and, most important to Obama and his advisers, independents and conservative Democrats feel alienated. In addition, imagine if the prosecution were to fail in the courts, and what an embarrassment that would be. And last, we must remember that Obama inherited arguably the most challenging presidency in history, with a looming depression, two foreign wars, crumbling infrastructure, global warming, and a relentless conservative disinformation machine—clearly, taking the unprecedented step of prosecuting his predecessors would have created a tremendous distraction at a time that the country could ill afford it.

Although Obama’s handling of the scandal has disappointed most—the right is angry because they’re convinced that Bush broke no laws while the left feels Obama has not done enough to eradicate the stain of torture—one can perceive the issue as classically indicative of Obama’s overall presidency and the extraordinary crises with which he has dealt. By sticking to his general pattern of governing as a centrist he has accomplished much while alienating most Americans.

Though I strongly feel Obama should hold the Bush Administration accountable and am troubled by his suppression of foreign efforts to bring justice, I nonetheless think it’s worthwhile to take a step back and contemplate Jane Mayer’s aforementioned pre-election wager: what would America look like if a lesser president had won in 2008? Heading into year three of Obama’s presidency, let’s not forget how significant his plain accomplishments, especially in the case of undoing Bush’s torture program, really are.

—More of Marc Adler’s work can be found at www.thebloodycrossroads.com.