Is the Governor of Arizona Evil? 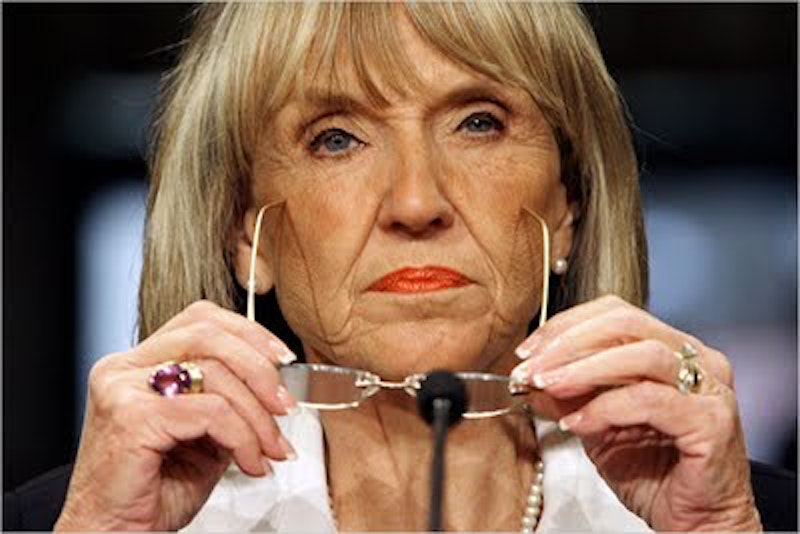 When the worst has been said about Arizona Gov. Jan Brewer’s racist immigration law, her disgusting lies about illegal immigrants, and her state’s pathetically inadequate gun regulation, many often forget about Brewer’s most despicable policy—implementing death panels. Inexplicably, this story hasn’t caused mass uproar or received very much attention. But everyone must know exactly what’s taking place in our country. And there is no excusing Brewer’s evil policy and persistent obscurantism.

In early 2010 she and Arizona’s Republican-controlled legislature slashed funding for certain Medicaid transplants. The cuts went into effect in October, denying 98 mortally sick patients, known as the Arizona 98, who were supposed to receive transplants. Two have already died. Francisco Felix, who has two years to live, was slated to receive a liver transplant from a friend, but because of Brewer’s actions that liver went to someone else, forcing Felix to search for $200,000 for the down payment on his operation.

The “explanation” is arguably as sinister as the policy itself. Although Brewer has habitually fled from inquisitive reporters, charging one such journalist of asking her an “unfair” question, and refused to grant interviews to anchors like Anderson Cooper, she defended herself on Fox News’ Greta Van Susteren show in December. As one might expect, she employed a massive dose of Fox News logic—a blend of outright lies, half-truths and staggering hypocrisy.

On the face of it you might presume Brewer enacted these draconian measures because she had no choice—as she has argued, Arizona’s budget hole is too huge to accommodate expensive surgeries. And you would be wrong. Rep. Steven Daglas, Republican from Illinois, sent the Governor a list of 26 different ways to come up with the mere $1 million plus, which, combined with federal matching funds, would pay for the transplants. Options include allotting a portion of the annual $8.5 million in Arizona’s unclaimed lottery prize winnings, allocating much of the more than $2 million settlement with AIG, and cutting Arizona State University’s unnecessary and bloated out-of-state travel appropriations.

For some reason, Brewer considers these resources more important than saving the lives of her citizens. Amazingly, she called the transplants “optional” procedures—a “Cadillac program” that other states do not provide. According to The Wall Street Journal, nearly every state does in fact cover these transplants, and one of the Arizona 98 is considering moving to Colorado to obtain a liver transplant. Brewer’s other favorite fabrication is that the procedures do not consistently save or significantly extend lives. In the Fox interview she claimed that bone marrow transplants are almost always unsuccessful, but in truth these procedures succeed 42 percent of the time according to the doctor of Mark Price, who needed such a transplant and died before he could get one.

More broadly, Brewer has justified her death panel by distorting the findings of various university studies, claiming they prove the transplants don’t work. The American Society of Transplantation, the American Society of Transplant Surgeons and the United Network for Organ Sharing all agree that this is nonsense, and the former sent Brewer a letter calling her policy an “actual death sentence.” Michael Abecassis, director of Northwestern University's comprehensive transplant center and president of the surgeons group, said Arizona “used data that were outdated or data that made no sense, or they misinterpreted or misrepresented what experts said.” Furthermore, Scott D. Ramsey, a co-author of a 1995 paper Brewer pointed to as evidence that lung transplants barely extend life, remarked that he is “horrified that they used a 15-year-old study to make this decision," and that "it's sort of like making a decision on whether to pay for 2010 AIDS drugs based on data from 1995 AIDS drugs."

But the cuts are really Obama’s fault, according to Brewer (and, implicitly, Wesley J. Smith of the conservative Weekly Standard, who shamelessly blames the problem on “a single-payer health care system crashing into a budgetary brick wall”). First, on Fox she argued that Obamacare forced her to slash spending because the new legislation provides no room for “flexibility,” even though she passed the cuts before health care reform became law. She has also refused to specify how she has allocated the $30 million Arizona received in stimulus money ($2 million of which is known to have been spent on opening a center to study algae as an alternative fuel); pushed for repealing the Affordable Care Act, which would pump more subsidies into her state; and audaciously implored critics to tell the federal government to supply funding for the transplants. Even more cowardly, she accused the media of “blowing this out of proportion,” falsely claimed on Van Susteren’s show that the late Mark Price probably would have eventually received state money for his bone marrow transplant had he lived longer and played the victim, portraying herself as the pitiful governor who’s been forced to make “tough choices.”

Recently, after refusing to allow the state legislature to even debate a proposal for fixing the problem, Brewer presented a “plan” to cover the transplants through a new uncompensated care pool of $150 million that would be paid for by forcing 280,000 Arizonans off of Medicaid, 5200 of whom suffer from serious mental illness. According to State Sen. David Schapira, this is nothing more or less than a vicious ploy to use the Arizona 98 as a political tool to pressure federal authorities to waive a law prohibiting states from changing Medicaid eligibility for two years by promoting the care pool as the only option to raise money for transplants. And no such money would really be raised because the policy would not go into effect until July, and the 280,000 kicked off Medicaid would presumably drain all the funding from the pool before the Arizona 98 could be saved. The real motive, it seems, is to make room for more corporate tax breaks.

What’s astonishing about this story is not the mere existence of a real life death panel but the blatant lies surrounding it and the public’s lack of outrage. This is a classic example of why America is in serious trouble, especially now that Keith Olbermann, who has tirelessly raised awareness by conducting gut-wrenching interviews with Brewer’s victims, is off the air. As a matter of principle, many conservatives/free market fundamentalists consider it acceptable to let citizens die because cutting taxes and entitlements is more important, though they love to argue that the most basic duty of “limited government” is to “keep us safe.”

Conservative disinformation-based propaganda has so thoroughly saturated our discourse that most Americans are blinded by false outrage and unaware of real-world tragedies. Far more people know about Sarah Palin’s fatuous death panel accusation than Arizona’s heinous program. Brewer’s policy is a death panel in every sense, as it incorporates all of Palin’s shamefully false characterizations of health care reform. It is because of Brewercare, not Obamacare, that, as Palin once fantasized, “they ration care” to cut costs and “bureaucrats can decide, based on a subjective judgment of their 'level of productivity in society,' whether they [patients] are worthy of health care." In this case the bureaucrat is governor and one’s worthiness is measured by income.