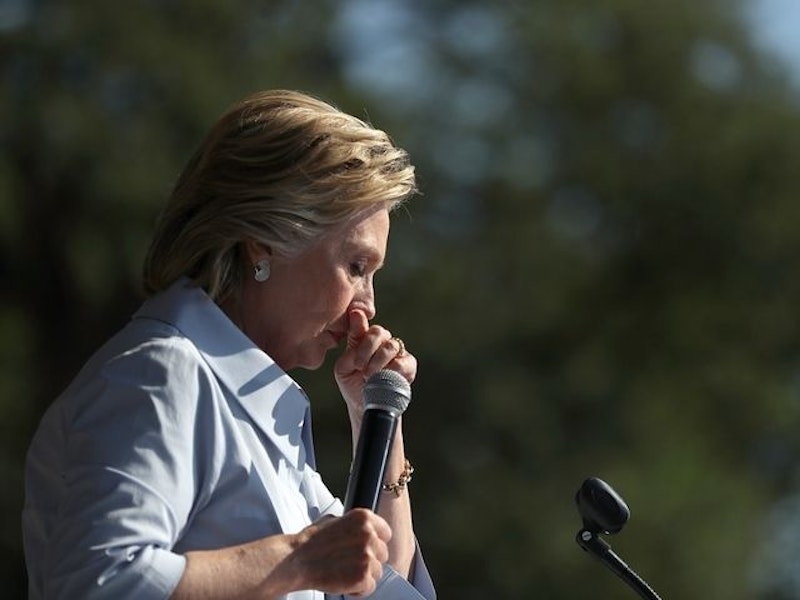 On September 11, 2016, presidential candidate Hillary Clinton had a seizure in New York. It looked terrifying. Stiff, quivering, appearing like a cross between C-390 and Robert DeNiro in Awakenings, Clinton froze, staggered, and then went limp. Her feet wouldn’t move. She lost a shoe and had to be loaded into an awaiting van.

In the days after the seizure, the media frantically began trying to protect Clinton. Receiving DNC talking points, reporters kept repeating that Clinton had pneumonia and had simply been trying to “power through” the illness—that in fact she is not sick, but something of a superwoman.

Although the media’s long been liberal, the defense of Clinton and the acceptance of her pneumonia story without skepticism (in fact, with enthusiasm) signals the crossing of a line from which there is no way back. To watch Wolf Blitzer, MSNBC, Jonathan Capehart, The New York Times and others simply deny the evidence of Clinton’s seizure and sell the official DNC version of events has placed the American press firmly in Bagdad Bob territory. Baghdad Bob, of course, was the Iraqi “information” minister who declared during the US invasion in 2003 that the Yanks were getting our asses kicked when in reality we were rolling across the country at will.

Actually, the media’s defense of Hillary’s seizure—not to mention Benghazi, the email scandal, or her lying in 2008 about coming under sniper fire in Bosnia—may need a more sinister example to truly capture the iniquity of journalists enthusiastically avoiding evidence and happily selling lies. In the book Witness to Hope, a biography of Pope John Paul II, there’s a scene described from 1941 Poland, after the Nazi invasion and takeover. Karol Wojtyla, the future pope, was a young actor at the time. Twenty-two, Wojtyla had formed the Rhapsodic Theater, an underground group of actors. An illegal troupe, they would meet at odd times and in low light to avoid being detected by stormtroopers.

While rehearsing an adaptation of Adam Mickiewicz’s epic poem, Pan Tadeusz, on the street below the apartment trucks rolled by blaring Nazi propaganda. As described by Witness to Hope author George Weigel, while the trucks blasted Hitler’s lies, Wojtyla and the other actors didn’t break character. In fact, the future pope raised his voice to be heard above the Third Reich: “The twenty-two-year-old actor then speaking, an underground seminary student named Karol Wojtyla, paid no attention whatsoever to the racket outside. Unfazed, he continued his recitation as if the harsh static of the principalities and powers of the age simply did not exist.”

In ways that are similar, the modern American media are those Nazis, rolling through town—which today is TV and the Internet—blaring lies and propaganda. The first few days after Clinton’s seizures were particularly comical, her collapse described as a “stumble” before the focus quickly turned back to the evil of Donald Trump.

To realize that these are people who can be told to stop filming Clinton and obey, only to have tourist video of Clinton’s seizure surface, and then react by accepting the canned story that Clinton had pneumonia (why no hospital visit?), is to realize that the American media is no longer just similar to Nazi or communist propaganda organs. There’s now no difference between CNN and The Washington Post and Der Sturmer and Pravda. The American media is not just like these deceitful organs; it has become propaganda, untruth, lies, deceit, the tank rolling down the Polish street.

From now on, the job of all courageous and truthful people is, like Karol Wojtyla, to raise our voices against the megaphone of the liberal press and refuse to accept the lie. Hillary Clinton had pneumonia and was just trying to power through?

Hillary Clinton had a seizure.

I don’t care if it’s Todd Purdum in Politico:

She wasn’t always like this. She wasn’t always a woman who could almost collapse in public, then emerge from seclusion a couple of hours later announcing, “I’m feeling great,” as if nothing had happened, as if she hadn’t already known for two days that she had pneumonia.

Some conservatives are hard at work spreading conspiracy theories about Hillary Clinton’s health in an attempt to disqualify her from seeking higher office. Video footage of the Democratic nominee stumbling as she abruptly departed a 9/11 memorial on Sunday, combined with news that she had contracted pneumonia, has fueled rumors on the right that Clinton may be concealing a far worse medical condition.

Or the smug and virtue-signaling Matt Taibbi in Rolling Stone:

No doubt about it, the country is in a brutal spot right now. We are less than two months from the possibility of one of the dumbest people on the planet winning the White House. And it seems that all anyone's talked about this week, whether around the water cooler or on TV news, Twitter or Facebook, is the lung capacity of Hillary Clinton.

I don’t care if Jonathan Capehart, Rachel Maddow and Matt Taibbi come to my house and waterboard me for three days, with Keith Olbermann cheering from the sidelines. Clinton has pneumonia?

Hillary Clinton had a fucking seizure.