K2 and the DEA 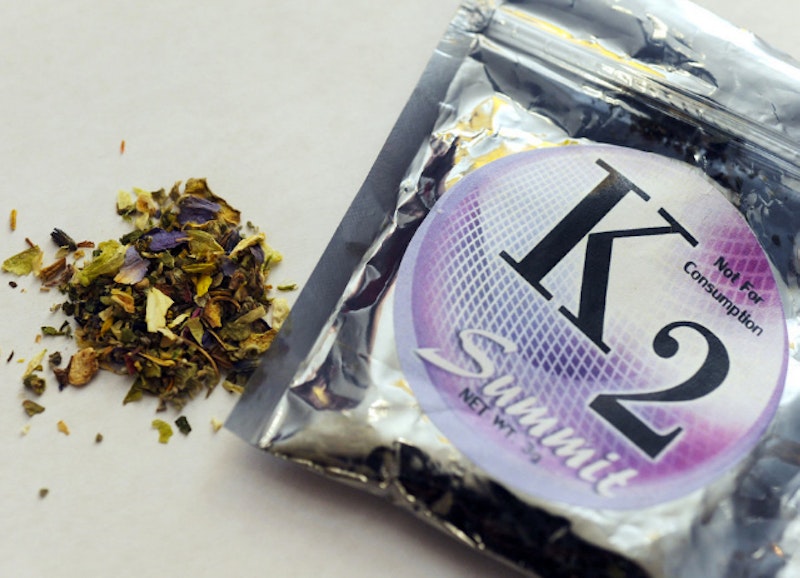 In several boroughs of New York City there have been posters placed in bus terminals and subway cars warning people of the dangers of K2. The average person knows of K2 as a vague substance sold in festively-designed pouches in head shops and local delis. It’s known on the street as fake weed. In the city there’s a grim situation in which social workers, cops, and lawyers are as dimly aware of K2 as the public.

Jared Fischer recently wrote an article on the recent outbreak of K2 psychosis that seemed to erupt out of nowhere on a street in Bushwick. The psychosis was not unusual. K2, though dubbed a synthetic cannabinoid, is more accurately a synthetic cannabinoid treated with toxic chemicals. The basic heart of the K2 structure, the cannabinoid backbone itself, were by-products of actual chemical synthesis carried out by PhDs at prestigious American universities and published in prestigious chemistry journals. These accidental by-products, much in the way that Albert Hoffman produced the non-poisonous LSD for Sandoz Labs while searching for useful analogs of poisonous ergot, are often untested on humans. It took Hoffman years to test the 25th synthesis of LSD, LSD-25, on himself.

The chain reaction of medical psychosis of K2 users in Bushwick is least remarkable for its medical effects. By this point the paid officials in the chemistry labs of the DEA appreciate that the product sold in pouches labeled as K2 differs markedly from the cannabinoid by-products spelled out step by step in chemistry journals. Through a shrewd entrepreneurial vision from willful amateur chemists in New Zealand, parts of the Middle East, and China and an overlap with gaping blind spots in US and UK drug laws, K-2 has become a social phenomenon.

The DEA’s existence is also a social phenomenon. Prior to the Nixon administration it didn’t exist. It has been strongly argued that the gaping blind spots which have allowed K2 to be marketed and sold have been primarily due to the inflexibility of how drugs are scheduled and penalized in US law. These classifications have faced increasing scrutiny from clinicians and scientists who say that they appear to incorporate very little scientific data on the medical and social effects of all drugs. In the UK, Professor David Nutt, a member of the Advisory Council on the Misuse of Drugs, was asked to resign his position after publishing a paper in 2007 which, taking medical and social data into account, re-ranked many previously high category drugs to much lower categories.

Reading Nutt's paper is enlightening in its straightforward approach. It’s easy to see why it was infuriating to those in the UK government who hired him to produce results that would neatly reinforce aggressive UK drug policing. A journal article making similar waves has yet to hit US academia. This is unfortunate because it’s clear there’s a relationship between the drugs US law regulates and the ones that rapidly outpace its policing. It’s tempting to believe that the recent decriminalization of marijuana in several US states is a concession to stop K2 in its tracks. However, the states that are making these concessions are not the ones visibly affected by K2 usage.

Economically depressed towns in the South as well as New York need the benefit of these laws if not just to throw the general population a recreational bone than assist the beleaguered emergency rooms and police officers dealing with the after effects of K2 use. It’s difficult to imagine another outbreak like the one that occurred in Bushwick happening with proper science behind DEA laws. People would rather experience a legally mild and predictable high as opposed to going to a local deli and roll the dice on whether or not they'll enter a psychotic drug experience. The first step will require the DEA to admit that for decades it has promoted laws based on inflexible and insensible moralizing that’s excluded science and allowed unscrupulous amateurs to destroy public health.