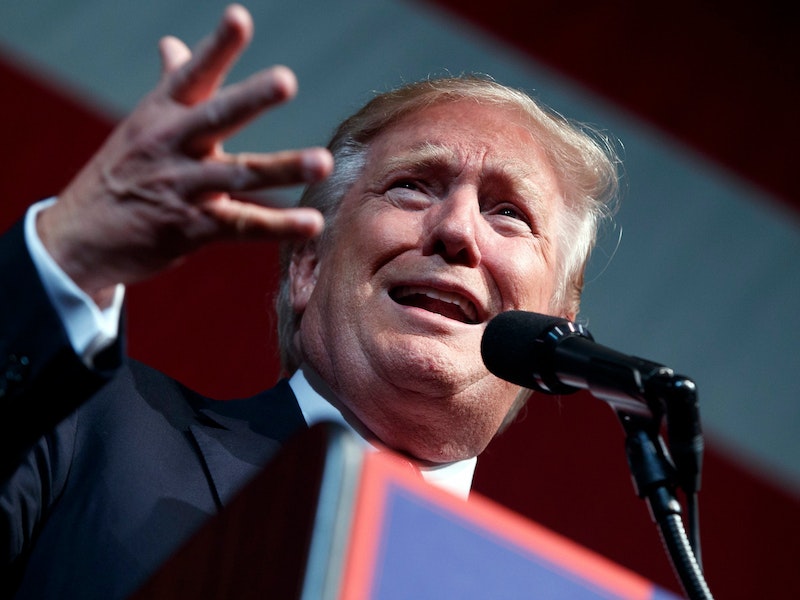 I’m surprised, at this point in the presidential election—Nov. 8 isn’t far away—there haven’t been more novel analyses of Donald Trump’s popularity among a sizable amount of Americans. You’d think reporters and columnists who’ve covered this contest for well over a year must be near-catatonic writing the same story: Trump’s up and down in the polls; Trump issues another outrageous, and often offensive, statement; Trump has no coherent economic policy; Trump fibs about the size of an arena rally. True, in recent weeks, as Hillary Clinton continues to raise money for her campaign—still not understanding that thousands of negative ads against her opponent resonate only with those who support her, however hesitantly, anyway—and dodges questions about the Clinton Foundation, and more importantly, her health. The entrenched “Acela” commentariat have changed gears from calculating the extent of HRC’s landslide to admitting Trump does have a chance of becoming president and bemoan the horror that entails. The New York Times’ Maureen Dowd deviates slightly from her earnest colleagues, who fear that the very concept of democracy is at stake, with her baked-over flights of imagination, but I think that’s because she’s scraping for new material, and if given truth serum, is probably rooting for a Trump victory.

James Parker’s election essay in the October issue of The Atlantic does attempt something more provocative—“Donald Trump, Sex Pistol”—and even if it’s very silly I give the guy credit for not listing the growing number of officials in past GOP administrations who’ve denounced Trump. It’s not Parker’s fault that the Atlantic headline writer contradicts the accompanying story—Parker says Trump is not a “Sex Pistol”—but I suppose that’s a function of periodicals cutting back on research and copy-editing staffs. Nonetheless, he does argue that there are similarities between the short-lived group that more than any other symbolized punk rock, even if he misses the point entirely.

He writes: “Within [Trump’s] precincts, the most vicious and nihilistic utterances retain a kind of innocent levity. The scapegoating and bullying are somehow childlike. This is why, so far, no political strategy has succeeded against him. It rolls on, his power grab, his wild Trumpian trundling toward the White House, because he’s not doing politics at all. He’s doing bad art. Terrible art. He can’t go off message, because his message is ‘Look at me! I’m off message.’… For Trump to be revealed as a salvational figure, the conditions around him must be dire. Trumpism—like fascism, like a certain kind of smash-it-up punk rock—begins in apprehensions of the apocalypse.”

Parker’s reaching. I guess his most valid, if obvious, point is that as The Sex Pistols at first couldn’t play their instruments, and didn’t give a shit, Trump is a novice politician (who must be surprised at his success), violating all the Beltway rules, and he, too, doesn’t give a shit.

Yet here’s where it all falls apart. In the mid-70s, when Patti Smith, Television, Talking Heads, The Clash, The Jam, The Ramones, and Elvis Costello, to name a few, emerged, it was a joyous time in rock ‘n’ roll, a sigh of relief that dissipated arena superstars like The Eagles or Elton John were getting their comeuppance for producing boring formulaic music. And The Sex Pistols made it all a sensation: when I first heard the two-sided single “God Bless the Queen”/“Anarchy in the U.K.” courtesy of music critic J.D. Considine’s advance U.S. copy, a bunch of us listened to it over and over and over, and flipped out. That the Pistols self-destructed after one album and a chaotic, truncated American tour made no difference: it was the volume of different new music the poured out of England and the United States, the second coming of the British Invasion in 1964.

In contrast, there’s no joy in what Dowd calls Trumpworld. It’s a combination of know-nothing xenophobia, bigotry, militarism, misogyny, and bitter frustration from a cross-section of Americans who view Clinton as the epitome of a phony status-quo politician, one who’s in hock to the financial industry and can’t be trusted to make real changes in the country. Clinton’s all about entitlement, who, no matter what she promises now, will give way to cynical expedience to keep her approval ratings up. As opposed to the explosion of punk rock and then new wave, there’s no fun in this election, no matter whom you’re supporting. It’s a no-win election, which is why Trump, the flamboyant, gross unknown, stands a real chance of getting elected.