Gov. Larry Hogan stakes position as king of the hill. 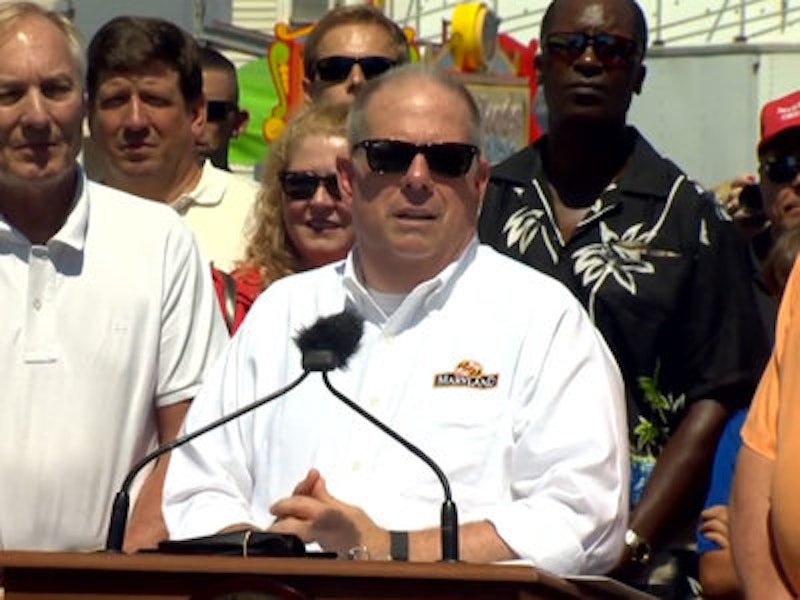 A later school starting date is Maryland Gov. Larry Hogan’s wall across the border with Mexico. It’s a symbolic gesture and may never happen, but it sure gets people excited and talking. All the bluster over Maryland’s school starting date is not about kids learning. It’s about who’s king of the hill. Anyone who still wonders why Johnny can’t read has the answer in Maryland. The Governor and Comptroller believe that shaving a few days off the school starting date will sell a few more raunchy t-shirts and encourage several extra games of Ski-Ball on Ocean City’s boardwalk, and the munificent gift will bolster the state’s economy. The General Assembly’s gripe is that Hogan (R) didn’t say please.

But nearly a month after school has begun, Hogan’s executive order—which short-circuits the Assembly as well as state and local education boards—is still roiling Maryland politics. It has pitted parent against parent, county against county, businesses against educators and, at the bottom of the brawl, Democrats against Republicans. Add to the gripes Hogan’s contested transportation policies and his generous unsolicited $10 million handout to Northrup Grumman, and it’s that rare sideshow that occurs when a Republican is elected governor in this heavily Democratic state. The aberration has happened twice in the past 14 years because Democrats put up weak candidates after a GOP dry spell of 50 years, since 1966. And right up front, a recent Opinion Works of Annapolis poll found that Hogan has an exceptionally high favorability rating of 71 percent, with even 63 percent of Democrats approving his job performance. Translation: Hogan seems harmless, but beneath the affability beats the heart of an anti-government Republican.

Much of the backbiting, which has some legitimacy on both sides, is also about tearing down Hogan as a prelude to the 2018 election when voters will choose a governor and in doing so decide which party will preside over legislative and congressional redistricting in 2021. But remember that the Maryland Court of Appeals has the final say over legislative reapportionment as it did in sanitizing Gov. Parris Glendening’s deliberate get-even map in 2002. The governor’s part in the fray casts Hogan as having a split-level agenda—one in the State House and another on conservative talk radio. He seems to be adapting his conservative talk-show shtick into public policy. Hogan’s assault on education is another way of advancing the Republican agenda of undermining public education to indirectly broaden school choice. It's also the pro-business governor’s way of tweaking Democrats.

Begin with schools. Hogan’s first mistake was listening to Comptroller Peter Franchot (D), his seatmate on the three-member Board of Public Works where the two usually vote in tandem while Treasurer Nancy Kopp (D) is often the outlier. Keeping Franchot as a happy ally might have been part of Hogan’s subterfuge. Franchot had been peddling the revised school calendar idea for several years as a revenue raiser and a family togetherness opportunity. Many families, and nearly all educators, view it differently. But here’s where reality bucks fantasy: Franchot also holds the dual title of chairman of the Board of Revenue Estimates. On the same day that Hogan signed the permission slip advancing opening day beginning next year, hidden in the news was Franchot’s announcement that Maryland’s revenues will fall short of projections by $250 million. It’s silly to believe that an extra weekend of Salt Water Taffy and Kettle Korn sales will make up that kind of revenue shortfall. The extra weekend at the beach is projected to contribute $74 million to Maryland’s economy, according to a study committee appointed by Hogan’s Democratic predecessor, Gov. Martin O’Malley. The committee also recommended re-setting schools’ opening date to after Labor Day.

But the real breach of faith is this: Maryland has a long-honored tradition of keeping education policy separate from politics. Matters of education, except for funding, of course, are usually left to the State Board of Education and local school boards. It’s fair to point out that the teachers’ union, and labor in general, has significant influence with the General Assembly, and that cachet is greatly expanded when a Democrat is governor. But the Democratic Assembly is unhappy because they weren’t consulted or considered before Hogan signed the executive order, an end run, or snub, Congressional Republicans regularly rebuke President Barack Obama for. Attorney General Brian Frosh’s office has said that Hogan may have exceeded his authority. In a 24-page letter, Frosh also said a court would probably find that Hogan went too far in exercising executive power and that the General Assembly has the right to override his order.

So saying, government at all levels spends billions—primary and secondary education consumes the second largest chunk of Maryland’s $42 billion budget, or $7.513 billion in 2016—force-feeding learning into malleable little brains, hoping that some of it will stick. There are Head Start programs, Pre-K, day care, free school breakfasts and lunches, after school enrichment programs—all designed to provide extra help and nourishment where and when it’s needed and try to make sure all kids get the same start and the same even break. And it’s been proven over and again that learning slows once those programs end.

Nobody ever said cutting the school year short advances learning. In fact, many states and school districts have expanded the school year in an effort to slow learning loss which occurs during summer vacation and school-year breaks, especially among poor children. Hogan is clearly going against the grain. Only 12 other states have late starts after Labor Day. In fact, a new study conducted by the Rand Corp. and reported in The Washington Post, shows that enrichment programs and continued learning can reverse the learning loss that summer usually brings, providing kids regularly attend the programs. This would seem to contradict the Hogan-Franchot theory of education that one last weekend family outing at the beach will refresh kids’ brains and open their minds to learning. They are profoundly full of it.

The clinker in Hogan’s dictate is not the later start date but the arbitrary school-ending date of June 15. There’s no accommodation for what might occur between the open-and-close brackets that might prevent Maryland’s 24 school systems from meeting the obligatory number of school days. The weather in Garrett County, for example, is surely more extreme during the school year than the more temperate climate of Central Maryland. And there’s a push in several suburban school districts to expand the number of religious holidays to accommodate the Islamic calendar. Hogan’s order does allow school districts to apply for waivers, and what a cataclysmic event if all 24 asked for exemptions.

There are an endless number of arguments as to why, or why not, the school year should be tampered with to accommodate the boardwalk crowd, when, in fact, there are many counties that do not benefit from tourism dollars. What’s more, nearly every recent battery of achievement tests given in Maryland show scores dropping, not rising. And the lowest of the low on the learning curve are probably kids who’ve never seen a beach, let alone build one last sand castle over Labor Day weekend. The dispute over the sensibility of Hogan’s order reveals more about his contempt for public education and the betterment of learning than any petty political bickering over vacation timetables or economic activity.