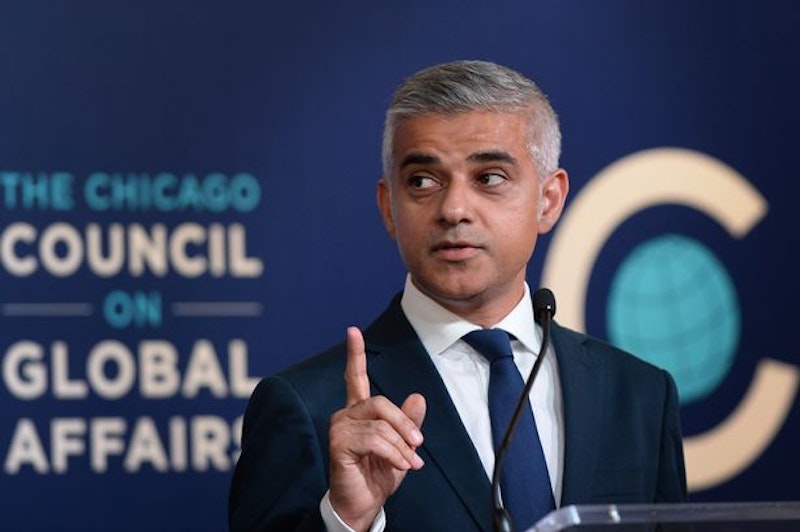 Khan's words in Chicago were a collection of clichés from an arrogant interloper. As for Donald Trump, he's playing right into the hands of ISIS, the new knee-jerk reply to any criticism of Islam, along with charges of “Islamophobia,” of course.

Khan himself plays into the hands of ISIS, as when he banned an advertisement featuring a bikini-clad woman and then defended the French burkini. In his past, he's surrounded himself with Islamists and Muslim extremists, probably in an attempt to pander for votes. Khan once used the slur “uncle Tom” (on Iranian state TV) against moderate Muslims, a bigoted thing to say, and something that could feed the appetite of extremists looking to punish those deemed “not Muslim enough.”

The lord mayor kicked off his trip to North America with a stop in Canada, where he met with Prime Minister Justin Trudeau. Perhaps the two discussed their views on the importance of universal Western values and assimilation. Trudeau, who claims to be a devoted feminist, recently spoke at a gender-segregated Ottawa mosque. Women, not allowed on the main floor, were relegated to the balcony. Trudeau enjoyed his male privilege, oblivious to the fact that a female Prime Minister would require special permission to be where he was on the main floor. This is what Khan's unassimilated multiculturalism looks like too.

It's unclear why the mayor of London felt confident about going to Chicago and lecturing Americans about immigration, or why anyone would care about his ideas. He insisted that new “immigrants” (by which he means Muslim immigrants, although he's unwilling to state that explicitly) in America shouldn’t be pressed to assimilate into American culture. Rather, the government should help them build “cohesive communities,” whatever that's supposed to mean.

Perhaps Americans would be more receptive to Mayor Khan’s fix-its if U.K. progressives had turned their nation into the multicultural utopia featured in their rhetoric, but that’s far from the case. As the Rotherham scandal proved, the political correctness attendant with British multiculturalism resulted in 1,400 girls in their early teens getting raped and pimped out without authorities in a position to stop it lifting a finger because they were scared of being called racists. Undoubtedly, it happened in other cities as well.

In Chicago, Khan said, “People shouldn't have to drop their cultures and traditions when they arrive in our cities and countries." Of course, nobody’s asking people to give up everything they value when they leave home, and they never have here, but there's a long-standing expectation in the U.S. that new Americans make an effort to fit in, a concept Khan dislikes.

If Khan is going to persuade Americans that the emphasis on assimilation that's served this country so well since its inception is suddenly outdated, he needs to be clearer on which cultural and religious traditions should be brought into the United States and preserved here. The inherent challenge with Islam, which he'd never admit, is its dichotomy between Muslims and non-Muslims, as per the Qur'an. In fact, millions of Muslims around the world start their Friday mosque sessions with a prayer calling for the defeat of the infidels at the hands of Muslims. How could anyone who's done this all their life even be able to think about assimilation after they’d immigrated to a Western nation? Most likely, Khan understands this.

Research indicates that 52 percent of British Muslims think homosexuality should be illegal. This is simply barbarism, and clear evidence that lack of assimilation is damaging British society. The general results of the poll revealed a chasm between Muslims and non-Muslims. Such divides are unhealthy for any nation, as they weaken the societal fabric, and they're a direct result of Khan's views on immigration. Multiculturalism has been a failure. Former Prime Minister David Cameron and German Chancellor Angela Merkel have publicly denounced it. It's weak and counterproductive to make no demands on your nation’s immigrants—to tell them they can live apart, as if they're still back in their home country.

Khan speaks of cohesive communities, by which he means separate communities. These come at the expense of general societal cohesion. Having a shared national identity is essential to the success of a nation, and following Sadiq Khan's worthless advice to the U.S. would make having that impossible. He apologized for his Uncle Tom comment, but it was one of those telling slips that reveal true character.