Kaitlin Bennett and the line between punditry and trolling. 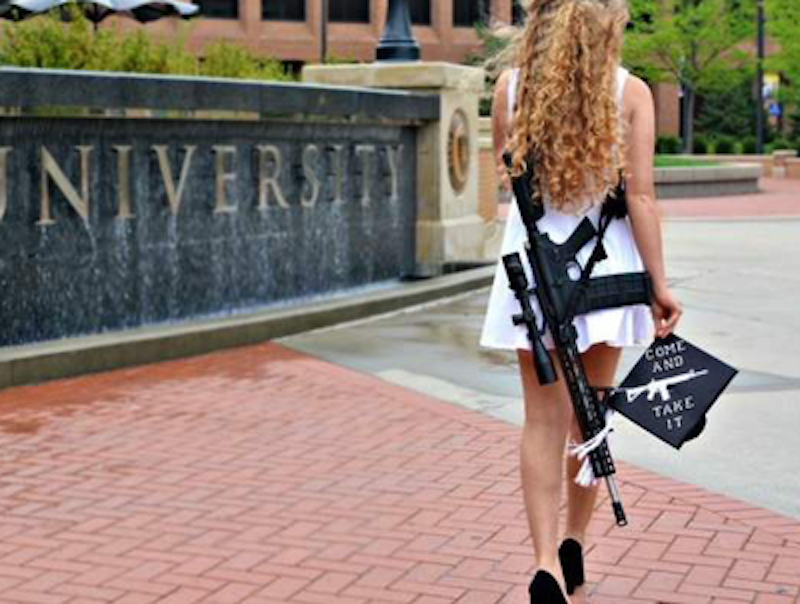 Kaitlin Bennett has achieved a level of Internet fame by wrapping herself in the Second Amendment. When she graduated from Kent State University two years ago, she posed for graduation photos with an assault weapon, making a statement for open carry on campus. Many thought this was in very bad taste because of the killings that occurred at Kent State on May 4, 1970, when the Ohio National Guard opened fire on anti-war protestors. The attention was enough to secure Bennett work with InfoWars.

Bennett is part of what I've come to think of as a post-Milo wave of right-wing pundits, long on audacity and short on substance. At one time, punditry usually required some amount of knowledge and credibility. Ann Coulter was an attorney who made her name as part of Paula Jones legal team in the landmark sexual harassment case where the Supreme Court ruled that a sitting president could be sued. Coulter cleverly capitalized on her notoriety by writing books on current events through a conservative lens, and going on lucrative speaking tours, often on campus.

Bennett's approach is far more reminiscent of former Breitbart writer Milo Yiannopoulos, who quickly became more notorious as a social media troll than a writer. Like Coulter, he aimed to extend his fame by speaking on college campuses, usually at the invitation of conservative student groups. And also like Coulter, he was frequently met with interruptions and protests. The frequent outbursts reached a point where Breitbart was footing the bill for additional security.

As I've written before, I often thought that liberal students and faculty panicking over the presence of conservative talking heads are much ado about nothing. The pre-planned events don't have mandatory attendance, and are usually paid for through ticket sales, or alumni donations to conservative student groups, like Young Americans for Freedom (YAF). In addition, these events usually have Q&A sessions at the end where one can respectfully challenge the speaker. For all of Yiannopoulos' showmanship, he really didn't stray from that formula.

This is where Bennett's approach differs. Her intent upon arrival, unannounced, at Ohio University was to do "man on the street" interviews with students for Presidents Day, asking questions like, "Who were the first three presidents?" A favorite narrative on the right is that college campuses are liberal indoctrination centers where students come out regurgitating America-hating, left-wing nonsense, and are incapable of critical thinking or maintaining any useful knowledge. In a previous Presidents Day-themed video, she asked students to name the presidents on Mount Rushmore. In light of this, Ohio students were probably right to conclude Bennett was acting in bad faith and looking to humiliate them.

The response from students at Ohio University was to run Bennett and her camera crew off campus. According to a campus police statement, the incident wasn't a riot: "There was strong language, and allegations that some unknown person(s) in the crowd splashed water, but there were no reported injuries or violence, and no one in the crowd was arrested during the event."

Already, right-wing blogs are making this incident seem worse that it was, with some describing it as an assault. The footage I saw was consistent with the description from campus police. Certainly the crowd was more rowdy than the situation warranted, but Bennett brought her crew, without any notification, to Ohio University to make trouble, and trouble is what they got.

Professional provocateur Roger Stone has said that being boring is worse than being wrong. Perhaps the way to counter right-wing hucksters trying to "trigger" college kids into embarrassing behavior on camera is to give them nothing. I think one of the most effective protests resulted in white nationalist Richard Spencer having to play to a near empty room. He later said he was no longer making campus appearances because of Antifa, but I think having his unpopularity exposed played a role.

Now that it's clear students are wise to Bennett's games, I'd like them to keep in mind that footage of them quietly turning their backs and walking away from her isn’t good for the exploitation business. The way characters like Bennett operate is to accrue negative attention. They know they're never going to have mass appeal, so they use their obnoxious personalities to stoke anger, and when that happens, they can twist their dismissals into something resembling persecution, which buys a veneer of credibility. As she said herself, “My haters memed me into a lucrative career that lets me travel the country, do what I want, and have a platform to be heard.” It also gives Bennett a pretense of purpose, even if her real purpose is avoiding a job that requires a hairnet.