The effect of progressive taxation in general is to redistribute wealth from rich people to other rich people. 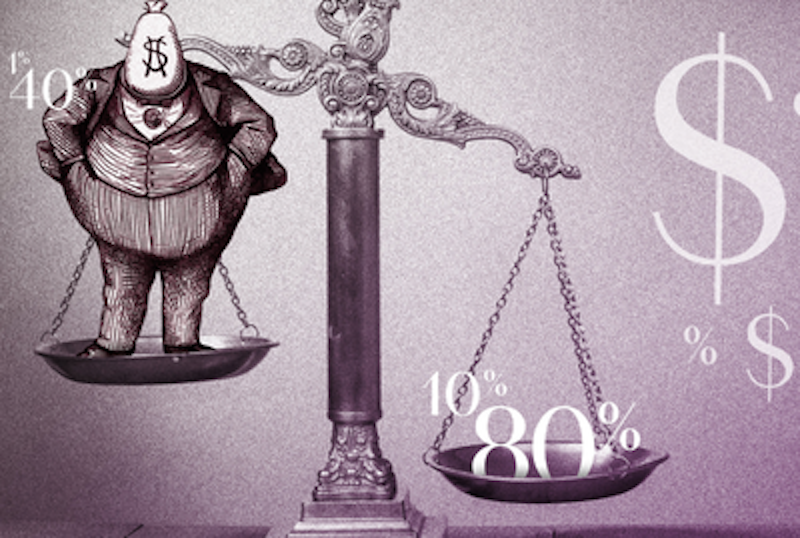 "Every Democrat running for president agrees that income inequality is one of the great problems of our time," writes Michael Bloomberg's media operation in The New York Times. "And we all agree that the wealthy should pay more in taxes."

In the minds of many progressives, or perhaps "every Democrat running for president," there's no gap in between the first claim and the second. That a more progressive tax code is an effective way to redistribute wealth appears obvious. The candidates, and many people I talk with about such matters—from my 94-year-old mother to professors of economics—seem to regard money obtained by the federal government as equivalent to money devoted to poor and working-class people. They conclude that a more “progressive” tax code, perhaps including the “wealth tax” endorsed by Elizabeth Warren and Bernie Sanders, is an effective or even the only means of making income or wealth more equal.

Taxing the rich much more heavily—if the rich aren't able to evade the taxes by various loopholes and lobbying efforts—will of course reduce their incomes and wealth. But it is, at best, an inefficient way to increase the incomes or wealth of those at the lower end of the scale.

Federal outlays in the 2018 budget totaled $4.1 trillion. Military spending took up almost half the discretionary spending: $623 billion. Taxing rich people redistributes their wealth to defense contractors, which are owned and run by rich people. About 40 percent of discretionary spending goes to federal contractors; a primary result of a wealth tax or a much higher tax rate on the wealthy will be a recirculation among corporate titans.

Service on the national debt totaled $325 billion, so a significant and ever-growing portion of the money obtained in the apparent pursuit of equality will be redistributed to bondholders, or recirculated through the world banking system. The governments of China and Japan each own over a trillion dollars in U.S. debt, for example, and so we’ll be taxing American rich people and redistributing their wealth to foreign governments, and to rich people elsewhere in the world.

If the government took in a lot more revenue through taxation, some of that would go semi-directly to social programs and services, and candidates such as Sanders and Warren have proposed dramatic increases in spending on health insurance, food stamps, housing, education, and other programs that would increase resources for some of those at the lower end of the income scale. But regarded as a charity, albeit one that collects contributions under coercion, the federal government isn’t particularly efficient. One of the effects of Warren and Sanders' proposals would be to dramatically increase social services bureaucracies, already notoriously inefficient. A significant portion of the redistribution would be to federal bureaucrats. These are not the most needy among us, though they are no doubt needier than defense contractors or Chinese central bankers.

In general, economic and political hierarchies coincide, and it's very unlikely that any president could separate them to the extent that Sanders and Warren fantasize about doing. Even in cases where the government has grown at the expense of the private sector or destroyed and replaced it (in China, for example), the approach has only succeeded in producing a new group of extremely rich people, now completely intertwined with the state. The effect of progressive taxation in general is to redistribute wealth from rich people to other rich people.

The government of the United States is no Robin Hood. Even if it does end up robbing from (or, let's concede, legitimately taxing) the rich, it's liable to give most of what it takes to the rich as well, or just devote its resources to growing its own merry band of bureaucrats. Taxing the rich only indirectly and inefficiently helps the poor. Instead it increases the resources of the government itself, and of those forces with the most elaborate and effective lobbying operations or campaign contributors. These would include the very industries—fossil fuel producers, pharmaceutical companies, defense contractors, and investment banks—that the Democratic candidates spend so much of their rhetoric decrying.

Government spending accounts for about 40 percent of economic activity in the U.S. Maybe if Bernie Sanders were president, he could get that up to 50 or 60 percent fairly rapidly. That’s not equivalent to redistributing another 10 or 20 percent to poor and working-class people. In the long run it might just be a wash, or it could even increase inequality, especially if a non-socialist president were to follow, now in control of significantly more of the economy thanks to the Sanders administration.

One might doubt Michael Bloomberg's sincerity when he says that the rich are too rich, though I wouldn't doubt Bernie's. But, sincere or not, the solutions he and his fellow Democratic candidates are proposing are inefficient at best, counter-productive at worst.