Why is our oppression continually ignored in the popular discourse? 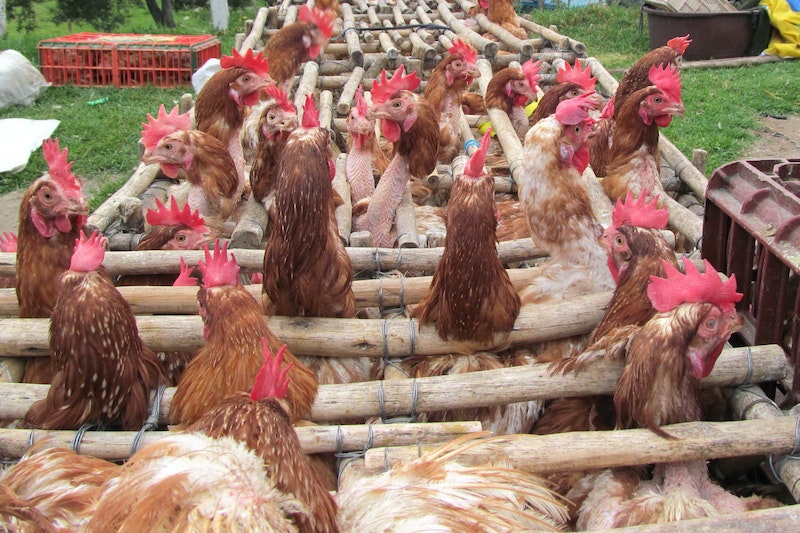 Word to the wise: don’t promote your faults. This is something my cousin Rooster has failed to learn in all his years on this earth and others. He claims it’s “honesty,” that it’s “candor” and “kindness” that makes him spread lies about himself and his family in this space. I think it’s vainglorious and cretinous.

But I’m not one to judge. I’m a very bad bird. I’m a sick bird, a feathered carrier of disease and mania. I never die; I’m merely dormant. My spirit rises in bodies undead. Now, at this time, I am a rooster. In a year, perhaps I’ll be a man. Or a turtle. Or, better still, a mongoose. Maybe a dinosaur? No, their time has passed. Also they ugly. Supra-ugly.

I wasn’t in Las Vegas for Wednesday night’s debate because I’m no longer allowed within the city limits. One time I hooked up with a sheriff’s daughter out there and was told to “get out before sundown” unless I wanted to be vivisected. This was pre-Elvis, pre-Jerry Lee Lewis, pre-Bergman and Rossellini: interracial marriage was still “a problem.” Forget about inter-species relationships.

Anyway, I was cooped up with this gigantic R. Crumbian broad that was about to pluck my feathers one by one when the sheriff busted in and waved his state-sanctioned phallus all up in my face. You humans love the gun, that specific object of desire that gives you superhuman powers, the ability not just to kill but also to destroy.

I don’t like super delegates, and I’m one. I think the will of the people should decide the nominee, not the party elites (like me). However, I’d like to distinguish myself from the Vermont Senator and the New York Mayor: I will be accepting Bennations (donations for Bennington). But that’s just if you like me. If that’s the case, by all means, give me your money. If you’re struggling to make ends meet, give me your money anyway, it’ll be better spent. I’m more important than you.

I’m an innovator, a trendsetter, a pioneer: a talking rooster with political convictions. Does that scare you? Does that make you uncomfortable? Well then maybe you should reexamine your own internalized species-ism, just as we’ve been taking account of our internalized sexism, misogyny, racism since the popular revolts of the 2010s led to no visible material improvements for minorities but did get normal people talking about gender neutral pronouns. Congratulations.

Bennington’s not a bigot. I should know, because I am him. An announcement: in lieu of further political discussion, I’d like to redirect attention to my recent successes: I’m starting a restaurant. Not just one. A chain: Burger Qing. Its primary competitor is obvious, but I think I can get some traction by appealing to investors in the Middle East, and perhaps some American conspiracy theorists. Our burgers will be 100 percent chicken-free, that I can promise. I will say that while I’m personally opposed to the slaughter and enslavement of all animals by human beings, you have to make some compromises when you run a business.

I’m a capitalist to my feathers, but I’m not an idiot like Elizabeth Warren. I won’t claim my bones are endowed with the spirit of commodity fetishism. I simply believe that it’s the most efficient system for making me wealthy at this point in human history. You may be surprised, but I’ve supported socialist and even communist regimes in the past. But I was getting paid off. Not this time. I’m not like my whore cousin Rooster, shilling for a scumbag like Michael Bloomberg. He’ll earn his punishment in Hell while I’m sipping apple-tinis in the Seychelles. Readers, I hope you’re taking notes.