A “brokers and Bolsheviks” alliance is what populists fear. 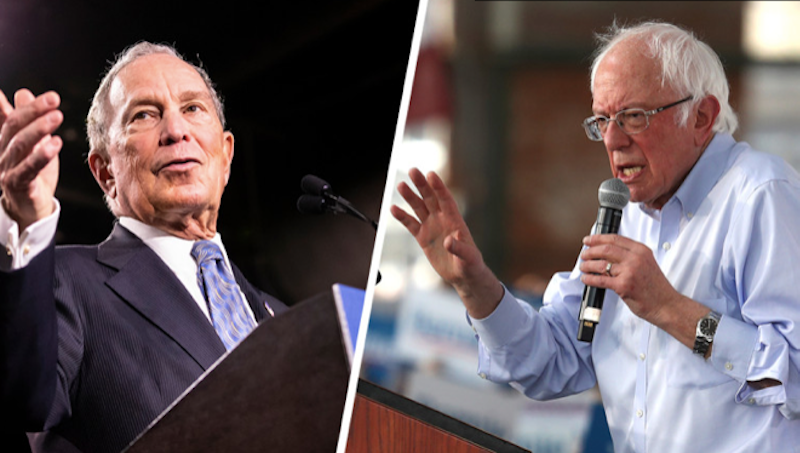 Mike Bloomberg and Bernie Sanders are roughly tied for first place, according to a Monmouth poll, in the Virginia Democratic presidential primary taking place in two weeks—22 percent support each, with Joe Biden several points behind and the others fading to irrelevance.

So why not a Bloomberg-Sanders ticket?

I know this imaginary ticket—for me a nightmare ticket, not a dream ticket, to be clear—must for now compete with other important imaginary tickets, most notably Bloomberg-Clinton (from the mind of Bloomberg himself, not to mention the minds of vengeful establishment anti-Trump people everywhere) but also Bloomberg-Romney (from the minds of the site The Bulwark, refuge for Kristol-style Republican NeverTrumpers).

Bloomberg might enjoy the thought of stepping aside after one term to right the supposed wrong of Trump beating Clinton in the 2016 election—and many have joked that he’d have to step aside if he wanted to avoid Clinton having him assassinated to get him out of her way, since she hasn’t come this far just to be, well, Veep for the rest of her days.

But I enjoy the thought of an unlikely Bloomberg-Romney “unity” ticket even more, if only because there would then be at least a small chance that someone who went into a coma in 2012 would wake up to find the 2021 White House occupied by Bloomberg and Romney and would have to have it explained to him, repeatedly and very slowly, how this is a victory for Democrats rather than Republicans. (“It would be a victory for all America!” shout the humorless, but they must by now realize they are the ones with no grip on what little remains of reality.)

There would at least be a chance of me bumping into the Republican acquaintance who un-friended me back in 2012 for my unwillingness to vote for Romney—who I viewed as far too squishy on econ, the thing that really matters, since, for example, Romney’s in favor of minimum wage laws. You may vaguely recall a time when people cared about policy issues like that rather than tribal grievances, personal scandals, street fights, and winning by any means necessary. My guess, though I’m not certain, is that that same un-friend would now insist that a vote for the Romney ticket would be a vote against all that is wholesome and American. Then again, maybe he reads The Bulwark now.

I still want a world of laissez-faire individualism, but since the populists now seem to be veering in the direction of hating both plutocratic corporations (witness the robot-banning, trade-bashing hot air of Tucker Carlson) and socialistic government, the Democrats might as well go all in and create the intimidating impression that they’ve squared the circle, resolved the dialectic, monopolized both right and left, and now present a powerful united front of Wall Street-minted execs and Cuba-philic leftists to smash the Trumpian populist uprising (and amidst all the resulting chaos, I’m still not sure I’d have an obvious dog in the race, but it might be even more fun to watch than 2016).

Bloomberg’s resurfaced (largely true) comments from his Aspen Institute appearance about crime being more frequent in minority neighborhoods could even be spun, like aspects of Sanders’ leftist economics, as an appeal to those coveted white Middle-American swing voters. (Bloomberg told the crowd, "[P]eople say, ‘Oh my God, you are arresting kids for marijuana. They’re all minorities’... Yes, that’s true. Why? Because we put all the cops in the minority neighborhoods. Yes, that’s true. Why do you do it? Because that’s where all the crime is.”) The Democrats may need some racist votes if they want to unravel Trump’s coalition. Stealing the plutocrats alone won’t do the trick.

In a sure sign Bloomberg has big establishment-media support baked in, CNN is already attacking a man as a Bernie supporter, questioning his motives, and raising the question of whether he illegally acquired footage, all for pointing out that old Bloomberg/Aspen video, though the footage has been readily available online for five years, ever since local news ran it in defiance of Bloomberg and Aspen Institute attempts to stop it spreading then.

But why fight its spread? Bloomberg holds the potential to get the votes of a lot of people who want their homes in the suburbs paid for by their flourishing businesses but also want an immense welfare state to pay for the troubled urban population several miles closer to the center of town—and want an aggressive police department to frisk people who are a bit too quick to wander back and forth between the two zones, all while regulations to combat fattening beverages, salt, and carbon emissions pile ever higher on the law books.

This has been the schizophrenic emerging Democrat consensus for a while now—not so much “limousine liberal” as “SUV socialist,” but who needs coherent principles these days? The Democrats might recapture the zeitgeist by making it official via their candidate selection. It’s America’s version of Europe’s governmental yet gentile sclerosis, and perhaps we should just accept it.

The most radical idea reportedly floated internally by the Sanders campaign, by the way, is the idea of banning oil exports via executive order, though if that happens, I think it’s safe to say Sanders—who of course may never become veep, let alone president in the real world—will have plenty of powerful, corporate opposition, and in one strange form or another, combative politics will continue, with little danger of a new establishment replacing the current Trumpian era for long before something else strange emerges.