Just nominate Elizabeth Warren and get it over with—she’s the Democrats’ best choice. 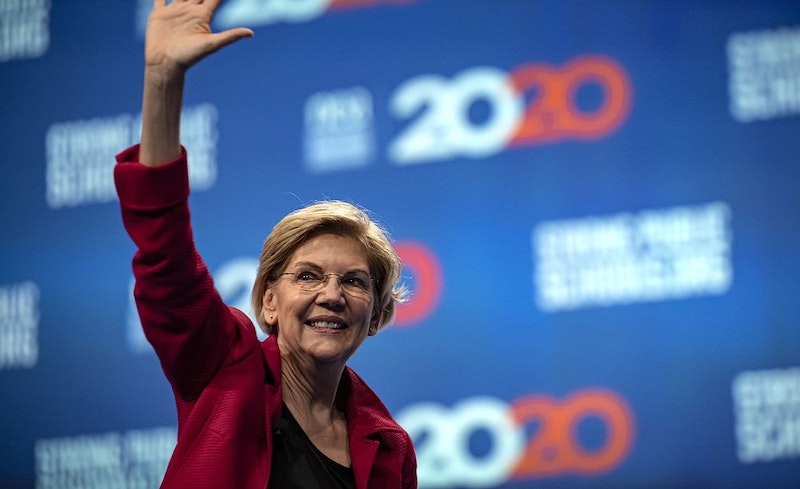 I’m sick of this election season. Every news site and TV talking head have been argued ad nauseum about who’s electable, who’s leading in the polls, and who can beat Trump for a year now, and my home state of Maryland’s primary election is still two months away (April 28th this year). Will Stancil is right; we should just nominate Elizabeth Warren and get it over with. She’s the Democrats’ best choice.

As I said last year when she first announced, Warren strikes that perfect balance between progressive idealism and Establishment Democrat. She can beat Trump, too, especially if his only tactic during the debates is calling her Pocahontas. Warren’s the top choice for LGBTQ people, and she’s holding herself accountable for mistakes she’s made regarding people of color, including a lack of racial diversity in her campaign and statements about prison sentencing. However, many indigenous Americans are still hurt by Warren’s heritage claims, so she’s not without faults.

Bernie Sanders is my second pick because he aligns with my values the most. America deserves more than the usual moderate Democrats provide. We need major changes in healthcare, education, workers’ rights, and immigration, and Sanders can bring those changes. Unfortunately, a recent Gallup poll revealed Americans would rather vote for a Muslim or an atheist than a socialist, and since Sanders calls himself a “democratic socialist” (even though he’s more of a social democrat), I don't think he’s going to beat Trump.

Pete Buttigieg could defeat Trump. Buttigieg is everything Trump is not: he’s intelligent, well-spoken, and knows what he’s doing. Also, despite both Rush Limbaugh and the Religious Right making a big deal of his homosexuality, most moderate Republicans I know don’t care either way; they’re more worried about taxes and national security. The problem with Buttigieg is he toes the centrist line too much, which results in policies that only benefit the most privileged in society and leaves marginalized people with table scraps. He’s also boring.

I can’t think of anything outstanding about Amy Klobuchar. Tulsi Gabbard is also forgettable, except for her trademark white pantsuit, and being an “Assad toadie,” according to Bari Weiss, even though Weiss doesn’t know what that means. As for Joe Biden, I wish he’d just go away. None of them are as bad as Mike Bloomberg, though.

Bloomberg is the Trump of the Democrats, not Sanders. Bloomberg and Trump are both rich old white men, Republicans whenever it’s convenient for them, and have histories of being bigoted assholes. Bloomberg has supported racist stop-and-frisk policies, has been sued for sexual harassment, and has referred to transgender women as men in dresses. His candidacy worries me because I originally thought Trump didn’t have a chance to win either.