Nominate a Libertarian for SCOTUS

The cure for RBG’s dirt nap is Judge Nap. 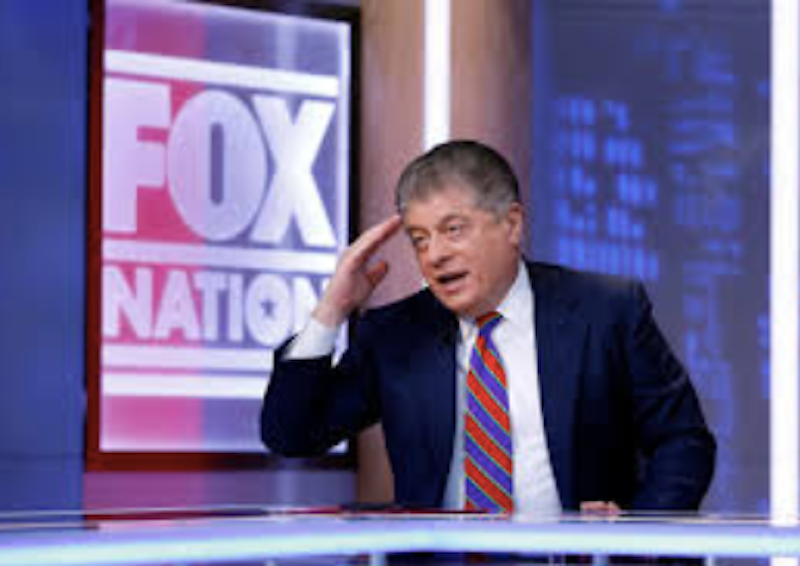 In a sane world, the obvious compromise solution for filling the late Ruth Bader Ginsburg’s seat on the Supreme Court would be to nominate my libertarian former boss, Judge Andrew Napolitano.

In the insane world in which we live, the immediate reaction from the left—even assuming they appreciate the moderate aspects of Judge Napolitano enough to mute their understandable all-out-war, Obama-not-forgotten, no-new-appointees impulse—would likely be, “That guy would be another selection from Trump’s grab bag of Fox News experts, and he’s a hardcore Catholic to boot, which makes him a potential threat to the only aspect of the judiciary we really care about, which is the likelihood of it preserving the legality of abortion!”

But wait. The complaints wouldn’t come solely from the left, since many of the Trumpers now hate the Judge (as colleagues call him for short) as well. They’d say, “He keeps calling things Trump wants to do ‘authoritarian’ and ‘unconstitutional’! You expect us to vote for a disloyal man like that?”

Furthermore, the “NeverTrumper” establishment neoconservatives might not be too happy with him either, since the Judge opined that their favorite politicians, George W. Bush and Dick Cheney, should be prosecuted for war crimes. This isn’t a man who’s going to let people get sent to Gitmo lightly or approve omnipresent surveillance without specific alleged crimes and specific suspects being identified. By contrast, if you want someone who thinks the Constitution should still fully apply in wartime, the Judge may be your last, best hope.

Libertarians obviously ought to be thrilled by such a nomination but would likely fall into vicious infighting anyway, since that‘s what they do.

I’m not even sure if Fox News itself would be happy about the nomination, since Fox News isn’t happy about much of anything. It’s a paranoid, pointlessly vengeful bureaucracy. I briefly worked there 10 years ago and was pressured out for reasons ranging from false to obscure a short time after I got a lot of attention arguing on CSPAN2 with a quasi-populist ex-girlfriend (coincidentally or not and without violating any Fox News rules and in keeping with the terms on which I was hired).

With the 10th anniversary of that incident upon us, I should probably receive not only a big, overdue apology from the mysterious, uncommunicative Fox bureaucracy but a final thank you from the nation for providing via CSPAN2 a preview of libertarian-vs.-populist battles that would recur for the rest of the 2010s. But my main point is that no matter how loyal you are to Fox—and I tried—you can never, never, never trust it (or perhaps any corporation) to be loyal, so who knows whether they’d boost the Judge’s nomination if one happened.

But all of the hypothetical objections noted above, from all the crazy factions mentioned, help in a roundabout fashion to strengthen the case for nominating the Judge.

In a nation now wracked by constant, unhealthy questions about who’s loyal to which political team, ethnic tribe, corporation, or short-term political crusade, we should greet with an immense sigh of relief a man who is still fanatically, devotedly loyal to the Constitution. Remember that document? The one that strictly and explicitly limits what government can do, whether you have cool ideas or evil ideas for new things it should do? Fidelity to the Constitution tends to get forgotten amidst all the election calculations and partisan wrangling lately, but the Judge has proven time and again it’s what he cares about most, subordinating his own policy wishes to it, and that should please everyone.

It gets harder and harder to convince people you’re striving for evenhandedness these days. You can write an entire book denouncing big government’s unjust treatment of blacks, as the Judge did just prior to my stint at Fox with his 2009 volume Dred Scott’s Revenge: A Legal History of Race and Freedom in America, and the odds are you’ll still get condemned by the Southern Poverty Law Center just for sounding like a “patriot movement” activist. It’s basically impossible to keep everyone happy.

And if people wanted really petty reasons to derail him, now they’ve got the obligatory Kavanaugh-like ancient sexual misconduct accusation from the 1980s to lob at him, since he’s suddenly being sued (timely!) for supposedly sexually coercing an arsonist (also timely!) whose case he handled back when he was a New Jersey superior court judge.

The Judge is such a proper, etiquette-conscious, old-fashioned guy that the charge seems especially implausible (and comes from a career criminal who admits to severe emotional problems and having a manipulative lawyer). However, if it were true, I suppose that could at least be seen as reason for one other faction to be pleased by the Judge’s nomination: the sexual-blackmail-utilizing elite conspirators who are often rumored to control politicians and judges (perhaps because multiple intelligence agencies adopted “honeypot” blackmail methods first used in Mafia scams). Then this nomination would be like unifying not only left and right but militias and our shadowy conspiracy overlords. Everybody wins! (I jest.)

The real winner, now more than ever, should be the constitutional constraint of unbridled governmental power, though. So nominate Judge Nap. If you prefer endless destructive political fighting and power grabs, nominate someone else. Unfortunately, I think we’ve seen people really, really like to fight.