Trump is Here to Stay Whether He Wins or Loses

Nothing will ever drive Donald Trump out of public life—not even prison or death. 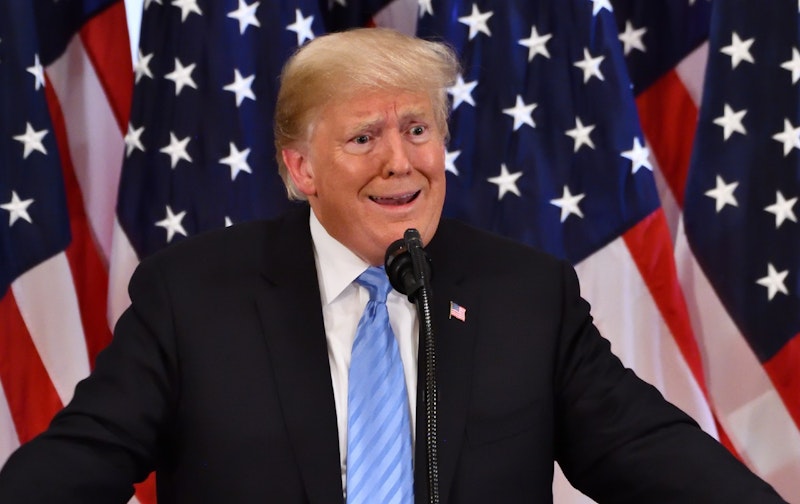 Among the most fearsome recent reads is Barton Gellman’s article in The Atlantic about the likely possibility that Donald Trump will refuse to concede to Joe Biden if the election results are close, hobbling democracy along the way. Trump’s already signaling his complaints and Gellman ably reports that the Republican Party, on the local and national levels, is prepping for the fight. Gellman imagines scenarios where Trump remains in office despite losing or where the only counter to Trump’s obstinacy is for House Speaker Nancy Pelosi to become an unelected president in crisis.

There’s a likelier scenario that might not be more benign. Our system doesn’t reward election losers at all, as evidenced by Bush v. Gore and Trump’s first term. In 2016, stunned Democrats catalogued all of the problems with Trump winning the election, from social media ads sponsored by foreign powers to vote suppression in key states to James Comey kneecapping Hillary Clinton to outright coordination between the Trump campaign and Wikileaks—after an independent counsel investigation and impeachment hearings that now seem like ancient history, none of it matters. Our system resists do-overs. If Biden wins, he’ll likely take office no matter how loudly Trump complains.

But Trump’s refusal to concede will serve financial and political purposes that Gellman doesn’t explore. Out of office but front of mind, Trump will milk his supporters to fund rallies and a media onslaught presenting himself as president-in-exile. He can monetize and motivate an angry audience willing to part with their money and with high interest in QAnon fables, Hunter Biden conspiracies and whatever other outrages emerge between now and January. The same energies that were marshaled to pursue Bill Clinton’s scandals throughout the 1990s and Barack Obama’s birthplace after 2008, will be directed by Trump as a modern Father Coughlin.

Traditionally, former presidents are reticent to criticize the president in office. Doubtless, Trump will not follow this tradition, claiming as special circumstances that the Democrats “stole the election,” and that “Obama said horrible, nasty things about me.” Generally speaking, I’d attribute quotes in the future, but I feel confident here. No sense of decorum will silence Trump out of office. A usual tempering force on a former president is that their influence and audience dwindle, so that anything they do have to say after serving is really just of academic interest. So they write a memoir for the sake of money and history and then make a mint in international finance while serving on some image-scrubbing non-governmental organization. Not Trump. He’ll use his refusal to concede, and the sense of victimhood of his core audience, to build a more disruptive cash machine. Not only will he enrich himself, he’ll be able to antagonize his enemies.

Maybe Trump does none of this because he doesn’t want to taunt either the federal government or blue state attorneys general into investigating and prosecuting him or his family for crimes in office. One theory is that his impulse to cling to the presidency is really a desperate attempt to secure freedom for himself and his loved ones.

But attempts to prosecute a former president would be fraught with constitutional issues to be decided by conservative appellate court judges. Rhetorically, Trump could use such efforts to amplify his persecution, further angering his supporters and building his audience. Biden will likely want to get on with his agenda, anyway, particularly if he realizes that at his age he might only have one term to make an impact. Besides, all sitting presidents who don’t die in office become former presidents. There are good reasons for neither side to start an arms race of post-presidency prosecutions.

The U.S. political system seems strong enough to put Trump out of office if he loses. But little short of his concession can drive him from public life.