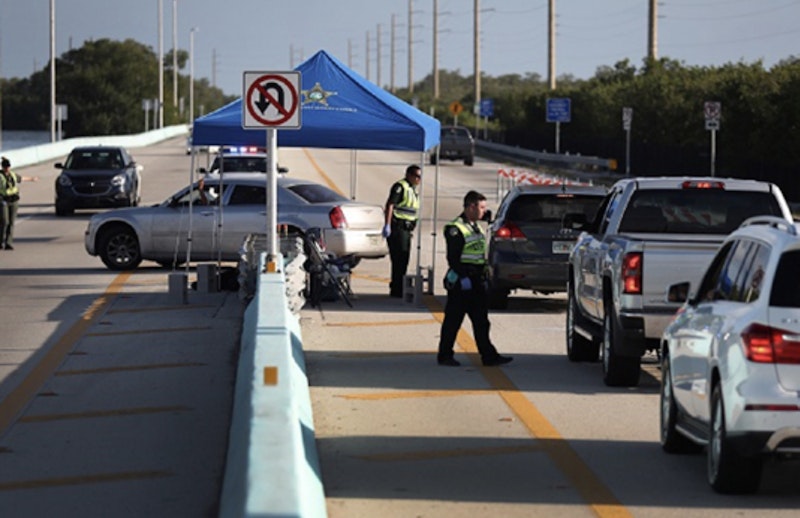 If you drive from, say, South Carolina to New Jersey, now the Jersey Department of Health—who you might not have thought had your cell phone number—will call you up en route and ask if you’re quarantining for a few days upon arrival, in accordance with the latest barely-law-related health edicts.

If you think this specific virus is the only phenomenon in the world against which our governmental—not to mention our increasingly surveillance-loving capitalist—overlords will deploy such intrusive control-grid techniques, you may be suffering virus-related delirium. The powers that be will keep refining the art and science of such constraints (and looking for excuses to try them out) at least as quickly as rebels think up ways of subverting them.

My frustration about our situation is heightened by the fact that some of the people quickest to rebel against such controls (whether those controls are warranted or not) have nonetheless been such enthusiasts in recent years of government border patrols.

If you, as a free individual human being, recognize the imposition you’re experiencing when stymied in attempting to cross the border into New Jersey, it should be no great feat of empathy to imagine you’d feel similarly trying to cross the equally phony, imaginary, and government-concocted border between Mexico and the U.S. or for that matter between Mexico and Guatemala. As long as you avoid trespassing on private property, you should be able to travel as you please—with plague control arguably one of the most rational exceptions to that rule rather than the most offensive.

But let’s leave the scientifically and legally ambiguous case of plague containment aside for the rest of this essay—troubling as it may be to think, for instance, of New York, New Jersey, and Connecticut quarantining people from other hotspot states or New York City setting up “quarantine checkpoints” at its road entrances (though with New York City residents reportedly losing about a third of a trillion dollars in personal wealth during this lockdown, even the semi-socialists here may be chafing to ditch controls and return to business as usual).

At a time when New York’s governor is alternately lambasting Rhode Island for barring travelers from New York and then barring travelers from Rhode Island himself, and a time when New York’s attorney general arguably imperils the entire nation’s gun rights by suing the National Rifle Association, I’d like to return to the general question of whether borders should exist, which as it happens I last addressed just before the COVID-19 crisis deepened and made people everywhere wary of travel and border-crossers.

As one small reminder that the right to ignore borders is not some recent cosmopolitan, globalist, internationalist invention, look no further than the centuries-ago origins of the northeastern states (then colonies) mentioned above. As libertarian economist Murray Rothbard explained in a 1970 essay, places like Rhode Island and Pennsylvania—often in defiance of what their official charters said—were at times de facto or even explicitly anarchist in the 17th century, some writers then seeing the governing of one person by another as in effect a usurpation of God’s reign and fleeing to adjacent colonies when their own got too repressive. I don’t have to believe the theology to like the political implications and mourn the fact Americans have strayed so far from their ungovernable, anarchist roots.

Some present-day admirers of Rothbard have nonetheless grafted an appreciation of borders onto his anarchism (as did he in his later years). The usual rationale, very succinctly stated, is that border-crossers may be coming here to use taxpayer-funded resources, not just to trade peacefully.

I should clarify, though, that the main Rothbard-admirer I named in my prior borders piece, Ryan McMaken, is more worried about regulations crossing borders than about human beings doing so (he has also written fine pieces about worries such as the noble cause of anti-racism being hijacked to promote anti-capitalism). Super-states and federal governments have just as often crossed local borders to increase (or “harmonize,” as they love to put it) regulation or taxation as to reduce them. So, by libertarian standards, it’s a tossup whether tearing down a border will be accompanied by on-net-freer or on-net-less-free policies. The historical record may even lean toward the latter.

We must nonetheless avoid casually treating borders per se as compatible with fully libertarian laws, though—just as, say, United Nations troops stopping a gang of local brigands isn’t sufficient evidence for saying government-funded international bureaucracies always increase peace and freedom. Rough correlations of any kind, in any direction, shouldn’t make us lose sight of the principles or ideal end goals we claim we really want.

So, you might at times protect people from regulation by hampering border-crossing, but that shouldn’t turn you into an enthusiast for borders any more than, say, a slave plantation or prison labor force being exempted from taxation should be seen as an argument for enslaving people or putting everyone in prison. Let people go where they like, even if they make mistakes or are preyed upon by others when they get there, and then keep fighting for across-the-board freedom from coercion, obviously. You shouldn’t “protect” people from ease of travel on the paternalistic (and often no doubt disingenuous) grounds that you wish to spare them regulation by exotic authorities any more than you should outlaw all tourism to distant lands to “protect” people from getting ripped off in foreign bazaars. Not your call.

Or to put it more bluntly: keep out regulation and welfare-use if you can, but that’s no grounds at all for hassling a Mexican libertarian who’s trying to slip across the border, no matter how politically unusual a character he may be.

I wonder if a few more months under house arrest will make everyone more sympathetic to that simple, liberating position.