As presented, Lauren Duca's book How to Start a Revolution is a failure. 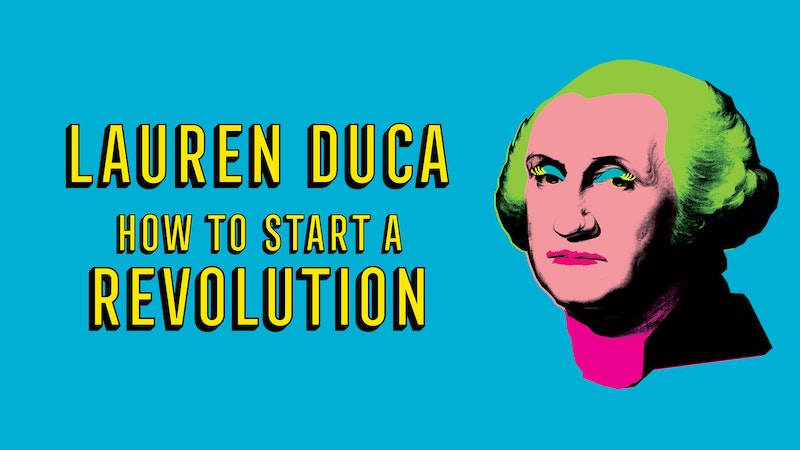 If Lauren Duca’s book How to Start a Revolution is trying to be what its dust jacket describes, it’s a failure. The book’s presented as journalism that “explores the post-Trump political awakening and lays the groundwork for a re-democratizing moment as it might be built out of the untapped potential of young people.” As well, “Duca combines extensive research and first-person reporting to track her generation’s shift from political alienation to political participation.”

This isn’t a good description of the text of the book, to the point that I think Duca’s actually aiming at doing something else. But I’m not sure Revolution succeeds at that, either.

“Do young people really care about politics?” Duca, not yet 30, asks rhetorically. “It’s a ridiculous question—because of course we care.” I’m of the ironically detached Generation X, and the idea that young people might not care about politics isn’t ridiculous to me; but the point is that Duca isn’t tracking a shift from alienation to participation so much as asserting that the young have always cared about issues.

She argues that schools, the media, and political institutions have never encouraged the young to get actively involved by linking issues to concrete action in language geared to their understanding. She presents a story in which the 2016 election was a turning point for Americans under 30 or so, using herself as an example. In her telling, since that point more young people have become activists, run for office at whatever level; have generally begun to translate passion into action.

I think this makes sense, but she doesn’t prove the case. Revolution has many interesting anecdotes of young people describing how the election led them into more political activity, but no statistical attempts to show how the 2016 election compares to previous elections in terms of inspiring activism. Or even how widespread 2016’s effect was on the population as a whole.

But How to Start a Revolution doesn’t try to make that sort of argument, whatever the jacket copy says. Instead, as the title suggests, it tries to speak to under-30 readers, even to under-20s, reinforcing whatever new interest they have in politics, encouraging them to act on that interest, and showing a couple of basic directions to explore. That’s a good and noble. But I don’t think the book does it well.

Start with the prose. Duca argues that much political writing is boring, and that a specific kind of gray dry prose keeps those not already initiated into politics on the outside of the subject; and this is accurate. She therefore uses a casual, slangy style—she’s trying specifically to reach the non-initiate, and so far so good.

But casual styles can be done well or poorly. Good writing is good writing, whatever the style; formal or informal, it gets across what it wants to get across in well-turned phrases that achieve their effect and their meaning without wasting words. I don’t see that here.

One reads that Trump’s “cruelty toward the marginalized and his shameless authoritarianism made for a cornucopia of dystopian concern,” and struggles to make sense of the image. Later, she warns that the slowness of the process of political change “will make us all feel like a couple of butterflies trying to scream over a state-of-the-art speaker system,” and one wonders whether butterflies in fact have vocal cords, and how all of us fit into only two butterflies. The same page describes Kitty Genovese as an “apocryphal victim,” which is inaccurate—an apocryphal story has grown around her death, but she was a real victim.

There’s a lot of this sloppiness. And there’s bland writing as well; the prose of Internet journalism. Rhythms and vocabulary are simple, clichés common. It’s understandable to anyone, thus accessible. But it’s not engaging.

Maybe the young will hear music in Duca’s writing that I can’t. She does have a solid structure for what she wants to say, grounded in her own experience—her relationship with her parents, reactions to her work as a writer, her reportage on a new generation of activists. This material’s a useful frame for the political themes she wants to discuss: the nature of traditional politics and how it’s changing, the potential for youth to take a hand, and so forth.

Those themes, though, are often explored only at a surface level. If Duca’s worried about dry political writing alienating the citizenry, for example, it’s wroth discussing the significance of The Daily Show or even social media. She recounts her experience as a guest on Tucker Carlson’s show to provide an example of negative adversarial politics, which sounds right, but isn’t that approach a way for Carlson to engage his audience? That is, isn’t Carlson doing what Duca wants to do, in a different way and for a different crowd?

Generally Duca doesn’t write much about how structures shape politics—the way the American Constitution fosters a two-party system, for example. There’s something traditionally American, perhaps, in the instinctive belief in individual volition instead of systemic side effects. But it leads her to conclude that (as one example) school history curricula don’t teach “the profound history of democratic practice” in activism like the suffragette movement “by design.” In other words, that someone consciously chose not to teach children about democratic practice for specific political reasons. This isn’t impossible, but Duca doesn’t provide any support beyond the assertion itself.

An uncharitable reader would say that Duca’s has the idealism and enthusiasm of an undergraduate who’s just read Chomsky for the first time, just learned about a few of the atrocities America’s committed over the years, and now wants to spread the truth. Passion isn’t bad. But a lack of critical thinking is; and when, for example, Duca cites approvingly the idea that citizens are “political consumers,” one wonders whether it’s worth thinking carefully about the ramifications of the image.

How to Start a Revolution isn’t necessarily a bad book, for the right audience. I think it’s aimed at a younger reader already passionate about politics, looking for encouragement, trying to find out what the next step is. But a reader who comes to the book without already having that passion is unlikely to read far enough to have their passion inspired.