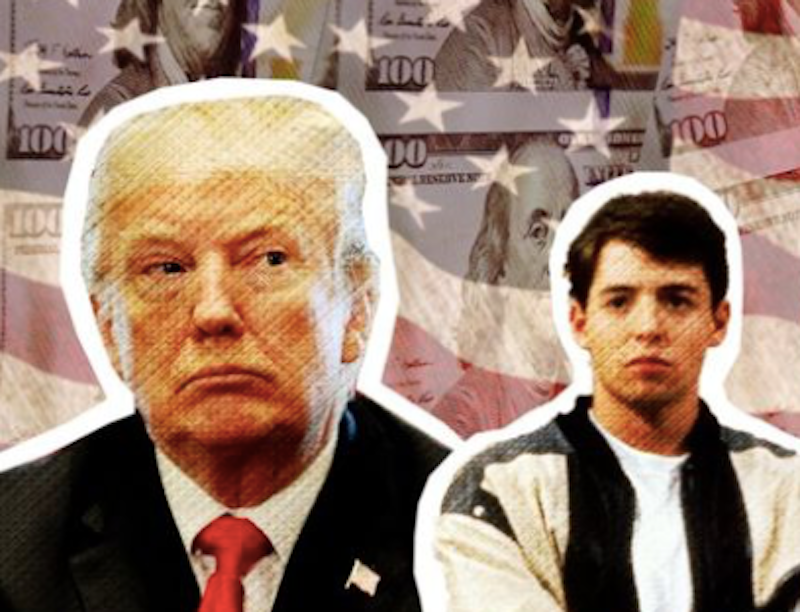 The Trump administration, and the popular movement that enthusiastically supports it, is a bit like the supporters of Ferris in the comedy classic Ferris Bueller’s Day Off—though not in the way that Saturday Night Live and anti-tariff commentators have each recently implied.

SNL used the Ferris analogy to mock the high absentee rate among administration officials summoned to testify to Congress. Separately, anti-tariff commentators noted that Trump, by touting tariffs, may be forgetting the thrilling lesson in economic history that the teacher at Ferris’ high school (played by Ben Stein) was trying to impart: Remember the devastating economic effects of inhibiting international trade wrought by the Smoot-Hawley Tariff, often blamed for lengthening the Great Depression. (This old lesson is much more valuable than any about economics you’ll get from present-day capitalism-bashing senator Josh Hawley, by the way.)

For the deeper similarity between Trump and Ferris, though, we must turn to an insight from my friend and fellow libertarian Phil Saxton, a film location manager now moving into computer programming (probably a wise move on his part, since even movie locations will soon be largely computer code, as perhaps Phil felt at times while working on the Philip K. Dick adaptation The Adjustment Bureau, in which reality keeps morphing, as I’d imagine it does in every location manager’s nightmares).

Phil notes that critics of Trump are often astounded by how indifferent Trump supporters seem to the literal truth of what Trump says, now compounded by the critics’ astonishment that Trump supporters aren’t too alarmed by the legal implications if Trump, on the sly as it were, encouraged Ukraine to investigate the Bidens’ shady dealings over there. But recall how much time Ferris’ supporters devoted to b.s. for one simple reason: They refused to let the evil school principal win.

Nearly everyone in the school, including Ferris’ uptight, pro-establishment sister, knew or suspected Ferris was not really “missing,” merely playing hooky to thwart the school administrators, visit an art museum (in a sequence that may be many taste-challenged viewers' only exposure to the art of the Smiths), and masquerade as the rich “sausage king of Chicago” to the disbelief of a skeptical, snooty waiter (Trump Steaks, anyone?). Yet soon enough, to maintain the ruse that Ferris is lost and possibly in danger, his friends have ginned up a “Save Ferris” campaign complete with posters and t-shirts (not so unlike provocative MAGA hats sometimes worn as if in deliberate defiance of reason).

You can understand Ferris' sister, not so unlike, say, Rachel Maddow, being thoroughly disgusted by the absurdity of it all. But the masses, in their vague, dimwitted way, suspect there is some larger battle going on, one that may require temporary deception (though I never lie and don’t encourage doing so except to stop physical attackers and thieves—lying, of which fraud is merely one species, is wrong). If the establishment is to be defeated, the bluff will have to be maintained. Some, of course, will not even realize it’s a bluff and will play along because Saving Ferris or Making America Great Again just sounds like the right thing to do, and possibly the trendy thing as well.

No matter. It’s the inquisitors, more so than the suspect, who must be thwarted, or so goes the unstated, even secretive argument, frustrating to principals, bus drivers, and congressional committees everywhere.

As in so many not-too-subtle 1980s comedies, too, there is in the current impeachment debate (which I think is still going on—hard to tell at times with the proceedings seemingly stalled after the House stage for the moment) the looming problem of the inquisitors’ suspected or actual hypocrisy: Trump made a phone call to Ukraine to big horrified screams from CIA agents and other “whistleblowers,” whereas Pelosi, Kerry, and Biden put their children on politically-pivotal Ukrainian corporate boards, and the press apparently would never have cared had it not led indirectly to Trump being impeached. It’s like finding out the principal has been goofing off at work all day himself.

Instead of a car crash, I hope the 80s-comedy-like climax of the impeachment process will be Trump being grilled in the Senate but having the audacity to bring the whole system crashing down—however base his motives—by explaining before the whole world how global politics (as the YouTube conspiracy theorist George Webb is always insisting in a semi-comprehensible torrent of names and connections) is largely a system of “weapons contracts in, energy contracts out” (of a given conflict region where factions are looking for political allies). This is the slightly harder-to-track, less visible version of the left’s longstanding fear: that it’s all “blood for oil.” It’s more subtle than that these days (and that’s progress, really—better this than living through something like World War II). We pour in weapons, the decision-makers who approve the pouring get a cut of the subsequent oil or gas profits.

The creepiest and most corrupting part of that tacit system may be the importance that transportation lines of all kinds then take on—pipelines, transport ships, trucks full of guns, planes full of sex slaves. But the most dangerous part is the willingness of some politicians and pundits to lean in the direction of encouraging warfare, if it helps protect their entangling financial interests in a given region.

Biden’s more hawkish than Trump. Do establishment politicians like Biden signal their willingness to fight Russia about Ukraine because they think democracy’s survival or “America’s geopolitical responsibilities” require it? Or are they merely willing (implicitly) to threaten deploying the U.S. military to protect their offspring’s very lucrative careers? Once you start asking that, many, many questions about global politics take on a darker yet more petty hue. You dare suspect the higher-ups never really cared about policy or philosophical arguments.

Bueller, by contrast, mainly wants to be left alone and in peace. So say we all.