Lots of Laughs in Hell

Gallows humor is the only way to survive the Trump era. 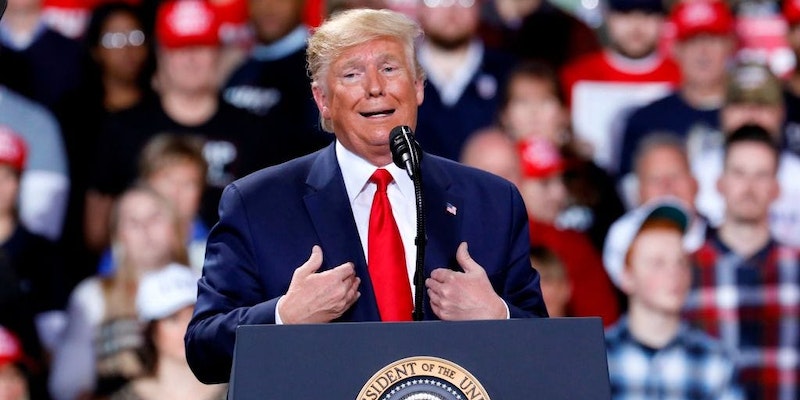 Early on in the novel, the narrator relates his disgust with the insincere sympathy of civilians and prostitutes that are spared the nightmare of trench warfare: “A few poetic regrets, if adroitly placed, are as becoming to a woman as gossamer hair in the moonlight. What I couldn’t help hearing under their spoken words and expressions of sympathy was this: ‘Nice little soldier boy, you’re going to die… You’re going to die… This is war… Everyone has his own life… his role… his death… We seem to share your distress… But no one can share anyone else’s death… You’ll soon be forgotten, dear little soldier boys… Be nice, die quickly.”

Céline’s descent into virulent anti-Semitism in the years leading to World War II, and his enthusiastic collaboration with Vichy France in writing many anti-Semitic pamphlets, doesn’t make Journey to the End of Night any less powerful or “legitimate”—he was a bigot and a brilliant writer.

There are lots of laughs in Hell. There have to be. Mass death, destruction, and suffering are too much to take with a straight face forever. Strained Greek masks of misery can only hang so long until insane, manic cackling takes over and spits the sickness out for just a moment. Laughter: crazy, delirious, hot-brained fevered psycho laughter. Because to seriously contemplate the reality—Trump relating a private phone call with a grieving widow and suggesting that her late husband might be in Hell—makes continued participation on this mortal plane a completely overwhelming proposition.

“Maybe he’s looking up, I dunno…” made only half the crowd groan. It did better in that room than Dave Chappelle’s “LGBT Bus” in one of his recent specials. Many, many people laughed at “Maybe he’s looking up, I dunno…” How can’t you? It’s one of the pettiest and reprehensible things you can do to someone. After bitching about Debbie Dingell’s vote to impeach, he moved back to February, when he gave “the A+ treatment” for former Rep. John Dingell’s funeral. He lowered the flags, “but I didn’t ask for anything, I don’t need anything.” Mocking a grieving widow’s phone call thanking him for giving her husband a proper funeral with flags lowered because she voted to impeach.

Or, as Michael Brooks said yesterday on The Majority Report: “Even this stuff, it works. I mean, this is a political rally that’s fun. This is the President of the United States rambling about the relative physical attributes of probably imagined airplanes and comparing them to Tom Cruise. That is fucking fun… A bizarre charisma, you can’t fit it. You could mention Obama, or Kennedy… there is a way you can mention certain types of charisma. This is weird. He’s uncategorizable, he’s just a fucking weirdo.”

“Maybe he’s looking up, I dunno” is not the same as “John Dingell is in Hell,” or even less blunt phrasing like “How do you know he’s looking down?” If you watch the video, the line clearly went through the electricity of his brain and left his mouth instantaneously, a riff more like Kinison than Coltrane. It reminded me most of “I prefer people who weren’t captured,” another one of his greatest hits of “pure sociopathy” as Brooks described it in the clip above.

The Trump era hit half of America like a psychic super-flu: when the brain is hot, things go wrong, wires get crossed. So many aspects and traditions of American politics we’ve taken for granted—decorum, empty speeches with big words, sclerotic bureaucracy, not releasing tax returns, even Trump’s refusal to switch to an encrypted government phone and continue to use @realDonaldTrump—have exploded like blisters, and the last three years have been about wading through that pus.

Mimicking a person with cerebral palsy during the primary four years ago had nothing ambiguous or uncategorizable in it. That was naked cruelty without creativity. “I prefer people who weren’t captured” has so much within it: the attempt at being diplomatic, the laconic delivery suggesting he’s been evaluating soldiers and military officers instead of dishwashers and hot water in hotels his entire life. He delivered that line like a sage being asked for advice and wisdom just as he’s about to pass on. And obviously the statement’s unbelievable absurdity and uniquely Trumpian framing: in July 2015, that was, in his mind, a soft answer. To contemplate that reality isn’t miserable at all, it’s enormously fun.

Trump doesn’t just contain multitudes, he contains everything. A fey, petty, thin-skinned, bloated, walking tumor of sociopathic narcissism is supported by red-blooded Americans in rural America who, like Clint Eastwood now and John Wayne two generations ago, lament the loss of traditional masculinity. This guy? He looks like Liberace. It’s not an original observation, but he has the appeal and anti-charisma of a comic like Rodney Dangerfield. To call it Borscht Belt is to underrate Trump’s natural comedic gifts. He’s funny, on purpose and not.

Another Freudian slip that hints at a larger truth: “‘[Democrats] will receive a big backlash at the box office,” referring to Congressional Representatives. Everyone already caught up to the 2016 revelation of political rallies as pro-wrestling events, a form of populist theater scorned by elitists and knee-jerk cliché machines. But here we have a comedian, whose bloated tomato-red face is a simple joy. I don’t think reporters and staff writers at The New York Times and The Washington Post want Trump to be re-elected, but their respective owners absolutely do. If they’re willing to go on TV and embarrass themselves by whining about Elizabeth Warren’s plans, just imagine what’s going to happen if Bernie Sanders starts winning primaries and can no longer be ignored. How will the media cover that?

This exchange with Wolf Blitzer from October 2008 is stunning: Trump looks 20 years younger and sounds like a completely different person. Besides his milder and more coherent delivery, everything he said is true. Nancy Pelosi should’ve impeached George W. Bush immediately upon taking office in January 2007. She had the gall to admit she knew there were no WMD’s in Iraq and that the war was sold on a lie (in her words, “a misrepresentation”). Yet, she “didn’t feel it rose to the occasion.” Please stop talking and kindly exit the realm of public life.

Clips like that, and the tired Twitter gag of finding pre-Presidential tweets from Trump that directly contradict very specific statements and actions he’s taken as President. That’s feeding the beast. A recognition of Trump’s obvious evil is necessary (rhetorical and physical—he should’ve been impeached for putting kids in cages and separating families forever. You don’t think one of those kids is going to grow up and get their revenge?). But to spend more than a moment with this guy in your head, I don’t get it. That’s a bizarre form of self-torture, and I find the guy extremely funny in a profoundly fucked-up way. I never go out of my way or seek out “Trump’s greatest hits,” they’re simply inescapable right now. And what I worry about is what happens when people aren’t paying attention any more because the President isn’t so blatantly grotesque, stupid, hateful, and a threat to the entire planet.

George W. Bush was painted as a loveable buffoon, but he was a threat to the world and caused a lot more suffering, death, and destruction in his first three years than Trump has by some distance. Pelosi’s casual admission that she knew Bush lied about WMD’s and referring to that as a “misrepresentation” is more offensive than most things Trump says. “Shithole countries” is a clearly racist and xenophobic thing to say. There’s no ambiguity, and that’s exactly what’s valuable about Trump and why we need to laugh at him. Pelosi admitting complicity in war crimes and receiving zero coverage for it is a greater evil I hope we never return to. Can Donald Trump be rehabilitated? If it can happen to Bush, anything is possible. I’ll have a smile on my face either way.