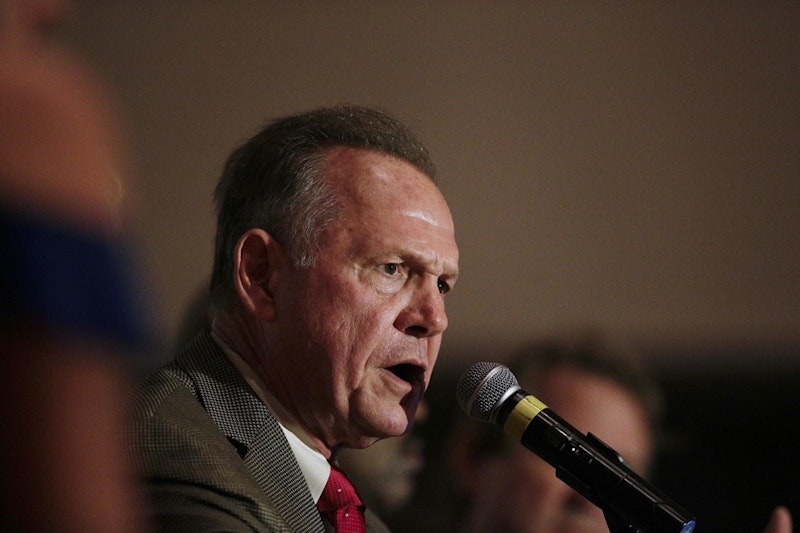 I’m an atheist, but don’t do a lot of Atheism 101 “200 reasons why God doesn’t exist and religion is bullshit” stuff for my podcasts or articles. There are countless other podcasts, books, and YouTube videos that do a better job than I can. I’m personally more interested in the “How now shall I live?” question than “Does God exist?" Even though I’ve no respect for religious dogma and institutions, I don’t really think of myself as an antitheist. I respect anyone whose personal religious beliefs motivate them to stand up against racism, sexism, and anti-LGBTQ bigotry, and I’ll gladly work alongside them.

That said, sometimes religion deserves a kick in the ass, and with the case of Roy Moore, the Church’s double-standards on sexual misconduct deserve all the heckling. Christian purity culture focuses almost exclusively on women. If a woman has consensual sex outside of marriage, she’s a slut, but if a man rapes a woman… she’s a slut. Male accountability doesn’t exist because if a woman’s skirt is too short, men magically turn into irrational brutes with no conscience and therefore can’t be held responsible for their actions. Which is strange because I’m pretty sure Jesus said, “If thy right eye offend thee, pluck it out and cast it from thee: for it is profitable for thee that one of thy members should perish, and not that thy whole body should be cast into hell.”

Sounds like Jesus is telling men to hold themselves accountable, but what do I know since apparently having the moral guts to hold men accountable is still filthy rags to God because I’m an atheist?

Jesus is a get-out-of-jail-free card for Moore. There was a satirical article circulating a few weeks ago that said recent poll results show Christians are more likely to vote for the devil than a Democrat. Not far from the truth. For all the conservative evangelical Christians that still support Moore, it doesn’t matter that the sexual misconduct accusations against him are piling up day after day. They could find a dead girl in his bed and still vote for him simply because he’s a good conservative Christian boy who’s going to make sure those gays don’t get married, just like God intended when he wrote the Constitution. If an atheist’s moral deeds are filthy rags to God, than Roy Moore’s chickenshit is caviar to these people all because he’s not a secular commie leftist.

Religion doesn’t hold a monopoly on sexual misconduct. Just this week, we’ve seen some of the Left’s most beloved celebrities outed as sexual harassers, such as Matt Lauer and Garrison Keillor. The only difference is that we don’t have a book we can cite to excuse this behavior. I know that many of my progressive Christian friends are pointing to scriptures to call out misogyny and sexual misconduct in the Church, but it really doesn’t help when church leaders can point to the same scriptures to maintain the status quo. If progressive Christians really want to end patriarchy, their only hope is for God to open up the heavens and say, “Guys, don’t do that!”

As for whether the allegations against Moore will cost him the Dec. 12th election, it’s hard to say. Current polls show Moore is in the lead by five percent, and analysts say his opponent Doug Jones really needs to reach out to African-American voters in order to win. Also, as Salon’s Amanda Marcotte reminded readers a few weeks ago, Alabama is steeped in Christian patriarchal culture, and many believe older man preying on young girls isn’t a big deal. If I weren’t an atheist, I’d be praying for Alabama right now. On second thought, if God is okay with sexual misconduct like Moore’s supporters say he is, maybe that’s not a good idea.