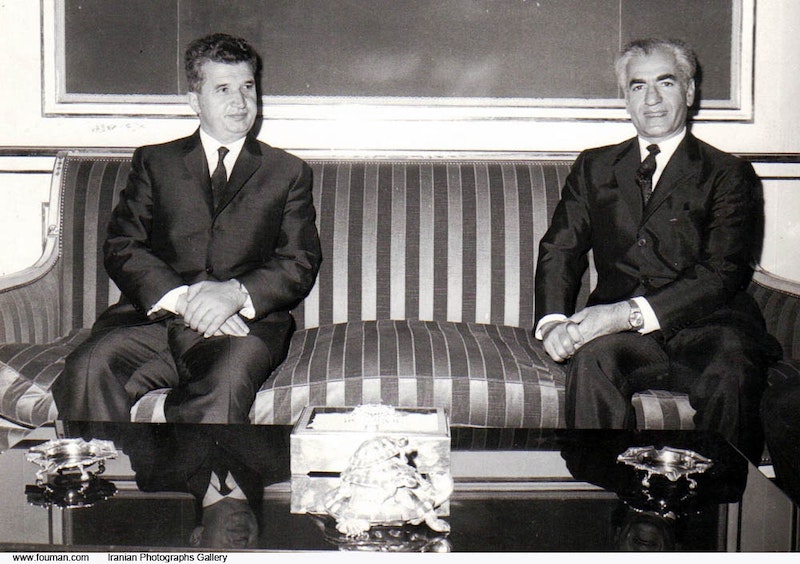 Before considering Nicolae Ceausescu’s austerity policy and the inevitable regime change it provoked within the Socialist Republic of Romania in 1989, some background is necessary. It all began with Ceausescu’s ambition to industrialize the country. Most communist leaders had such an ambition, which turned into an obsession of industrializing overnight—which you can’t do without sacrificing the other economic sectors (imports, agriculture, and retail) to the population’s detriment. Ceausescu’s ambition, though, started off with good intentions and it was largely based off his agreements with the Shah of Iran, Mohammad Reza Pahlavi.

Pahlavi’s rule was enforced in 1953 in a coup d’état against the democratically-elected Prime Minister Mosaddegh. The coup was perpetrated by the US on behalf of the British. Mosaddegh wanted to nationalize the country’s oil, and British Petroleum wasn’t pleased about it.

Romania’s historical commercial ties with Iran date back to 1902. They were cut off in 1941, due to Antonescu’s alliance with Hitler. Diplomatic relations resumed in 1946. The Shah visited Romania in 1966 and significant trade contracts were signed. Romania wanted oil and cotton; while Iran was interested in purchasing machine tools, tractors, steel rolls, chemical products, freight wagons, and other goods. In 1967, Ceausescu visited Tehran and signed new deals. A bigger supply of crude was required to support Romania’s rapidly growing petrochemical industry and refining facilities, from which oil could be exported to the West for the hard currency, which, in the regime’s eyes, was essential for economic development.

Ceausescu was reluctant to rely on the Soviet Union for energy supplies, because he was promoting his policy of national autonomy within the Eastern Soviet Bloc. In 1968, he held a speech denouncing the Soviet troops for their invasion of Czechoslovakia. He was well aware of the Kremlin’s boot.

In 1969, Romania granted a loan of $100 million to Iran. The money was used to purchase Romanian industrial equipment. In compensation, Romania received preferential prices on Iranian oil and cotton. In 1970, the Shah arrived again in Romania and was lavishly received by Ceausescu and his wife. To his credit, however, the Shah wanted to export less of the country’s oil in raw form. Processing the oil and selling it as petrochemicals was the better way.

Ceausescu and the Shah didn’t agree on a number of matters. Ceausescu desired more land allotted for the cotton farm in Northern Iran, held jointly by the two countries. The Shah, however, desired less raw cotton to be exported to Romania, and in turn, wanted Romania to import more finished cotton goods. Ceausescu wanted more Iranian timber, the Shah wanted Romanian investments in furniture factories. Iran was also planning its own hydrocarbons distribution system. In collaboration with Turkey, a pipeline was developed with its terminus point in the Black Sea. Bucharest and Tehran did agree on their car manufacturing collaboration (the Romanian-Iranian Tabriz factory). In 1971, Ceausescu visited the Shah. Romania and China had agreed to a new air corridor, and a port of call was needed. The Shah was interested, since he was also seeking to develop relations with China. By the middle of the decade, Romania’s imports from Iran totalled $300 million and close to 90 percent of that was crude oil.

At the beginning of the 1970s, Romania acquired external loans in hard currencies with which it purchased technology. In 1979, however, the Iranian Revolution forced the Shah to flee. The oil crisis and the panic jacked up interest rates. In 1981, Ceausescu contracted a loan from the IMF. As is that institution’s bad habit, it pressed for “structural adjustment” (austerity), for the country to import less and export more. The communists and the IMF analysts failed to take into account the actual consequences out of incompetence, or they simply didn’t care. I suspect both reasons are true to one degree or another. Instead of negotiating debt rescheduling, as other countries did who faced the same financial troubles, Ceausescu simply decreed that the entire external debt would be paid off. Shock therapy commenced at his whim.

Debts to Western creditors rose from $1.2 billion in 1971, to $13 billion in 1982. To get a feel from the Western press at the time, here is a pertinent article by John Kifner from December 1983. The State Planning Committee recorded a trade surplus of $300 million in 1981, one of $1.6 billion in 1982, and projected roughly the same amount for 1983. What was the plan to quickly retire the remaining $10 billion debt? Drastically cut back on domestic consumption. Cut back on food, electricity, and heating. This inevitably led to shortages, cold, and malnutrition. Sugar, cooking oil, and later eggs were given out on ration cards. Lines formed at (empty) stores early in the morning for bread, cheese, and milk before the arrival of the supply trucks. Meat for sale was a rarity.

Exports of beef, fresh vegetables, fuel, good clothes, and other goods had priority over domestic consumption. The priority was to get foreign markets to consume net domestic output in exchange for net earnings in foreign currency. Though the country’s agricultural potential was among the highest in Europe, it was unable to cover all its needs. And although Romania had considerable oil reserves, Ceausescu overinvested in the oil processing industry and left the country vulnerable to supply shocks. Simply put, production for the home market and for external markets relied too much on foreign crude (obtained at preferential prices).

In January 1989, Romania’s foreign debt was paid off—however, austerity lasted until December that year, when the revolution and his execution took place. Ceausescu so valued the relationship with Iran that he undertook a trip to Tehran on December 18th, even as the social unrest that was to end his rule in less than a week was swelling. Ceausescu and his wife were given a faux trial, orchestrated by the political opportunists and traitors around him, and they were summarily executed on Christmas Day. One sentence that most, if not all Romanians agree with, is that the 1989 December revolution was confiscated. The communists changed colors. They became capitalists and they won.