The Democrats Didn’t Betray Americans on the Tax Bill

The left’s criticism is unwarranted. 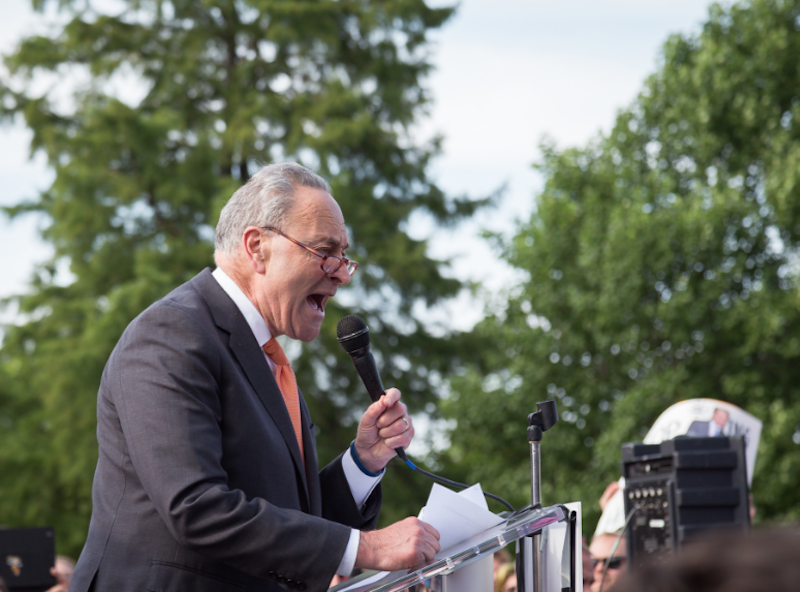 The Republican tax monstrosity, which will cut taxes for the rich while gutting health care and raising taxes on everyone else, passed in the Senate late Friday night. It was a straight-line partisan vote. Every single Democratic senator, including red state centrists like West Virginia's Joe Manchin and North Dakota's Heidi Heitkamp, voted against it. Every Republican except Tennessee's Bob Corker voted for it.

Still, after the bill passed, many on the left denounced both Republicans and Democrats. Somehow, despite weeks of attacking the bill and unanimous, full-throated, bitter opposition, Democrats are still supposed to be at fault because this bill passed.

How is it the Democrats’ fault? Critics blame their messaging. Democrats, the argument goes, focused on deficit busting and process, and failed to frame the bill as a giveaway to the rich. If they’d convinced the country that the bill was evil, popular sentiment would’ve overwhelmed the GOP, and wavering senators like Susan Collins of Maine or John McCain of Arizona would’ve voted no. Left critics were particularly incensed by Chuck Schumer's post-vote tweet, in which he said, "Tax reform is an issue that is ripe for bipartisan compromise. There is a sincere desire on this side of the aisle to work with the GOP, particularly on tax reform, but we have been rebuffed, time & time again." This tweet is supposed to demonstrate Schumer's quisling desire to propitiate the rich, if only the Republicans would let him.

But Schumer and the Democrats didn’t propitiate the rich. His tweet expresses a wish that Democrats could’ve created a better bill that would help rather than hurt people. He's framing the Republicans as unreasonable and awful, just as the Republicans framed Democrats as unreasonable and awful for passing ACA on a party-line vote. For legislators, the other side is always extreme and unwilling to compromise; your side is always reasonable and willing to work towards better solutions. That seems like boilerplate senator-speak, not some sort of betrayal of principle.

Democratic messaging was successful. The bill is extremely unpopular, with around 36 percent approval and 46 percent disapproval. The reason is because people think, accurately, that it’ll benefit the rich—exactly the message the left wants the Democrats to get out to the electorate. The bill polls worse than most tax cuts, and worse than Obamacare did in 2010. Usually tax cuts are a vote winner, so the unpopularity of the bill is remarkable, even given President Trump's crappy approval ratings.

You could argue, I suppose, that even though Democrats didn't do anything wrong, it's still wise for the left to lambast them. Politicians like to waffle; Democrats receive huge amounts of money from wealthy donors, and so might be tempted to sign off on tax giveaways to the rich. In this instance they didn’t, but it's worth showing them how angry the issue makes the base. Yelling at Schumer for daring to suggest that Democrats could ever work with Republicans is a kind of prophylactic. It doesn't matter if it's reasonable in this case; it's just meant to put the fear of God into him.

There are real downsides to blaming the Democrats no matter what they do. The left is incorrectly claiming that Democrats could’ve stopped this bill. The Republicans are in the majority; their donors told them to pass a tax bill, and they were clearly determined to pass it. The villains are the Republicans. It's not a both-sides issue—and turning it into a both-sides issue leads to poor analysis and strategy.

If the Democrats are as culpable as the Republicans, then there's no difference between the two parties. Why bother voting? For left goals to pass, left voters need to go to the polls. But when you insist that elections make no difference, you discourage people from turning out. If the left wants to block Republican efforts going forward, they should point out how much we need Doug Jones to win the Alabama Senate seat. Electing Democrats is hugely important for left policies, and implying otherwise is bad messaging.

It's also dangerous to assume that the correct message will always win out, regardless of other practical considerations, like who has the most votes in the Senate. The left can't enact its policies through sheer willpower. Getting into power is a long-term, arduous process. Assuming you’ll always win just because you're right breeds disillusionment and conspiratorial thinking. And, as Trump demonstrates, disillusionment and conspiracy theories don’t benefit the left in the United States.

Finally, blaming the Democrats no matter what they do makes it difficult to hold them accountable when they actually do things that are bad. Democrats are not in power on the national level at the moment, but they do hold sway in many cities and localities. In those areas, mayors like Rahm Emanuel in Chicago support racist policing practices, gut schools, and starve poor and marginalized communities of resources. These are Democratic Party failures that have energized local activists, and deserve far more national attention and pushback from the left. But it's hard to focus on these problems when you're attacking Democrats for supporting a tax bill that, in fact, every single one of them opposed.

The House and the Senate passed different bills, and it's just barely possible that they won't be able to reconcile them in conference. At the least, there will have to be another House vote on the Senate version of the bill. Grassroots opponents of the tax bill will have to flood their reps with calls; House Democrats will once again need to vote unanimously against the bill. And even so, the bill will probably pass, because Republicans have a majority. In a democracy, you sometimes lose. The loss will be painful here, because many people are going to suffer. But a loss isn't always a betrayal by your allies. Sometimes it means your enemies are stronger. Best to focus on weakening them.