The Downfall of Roy Moore 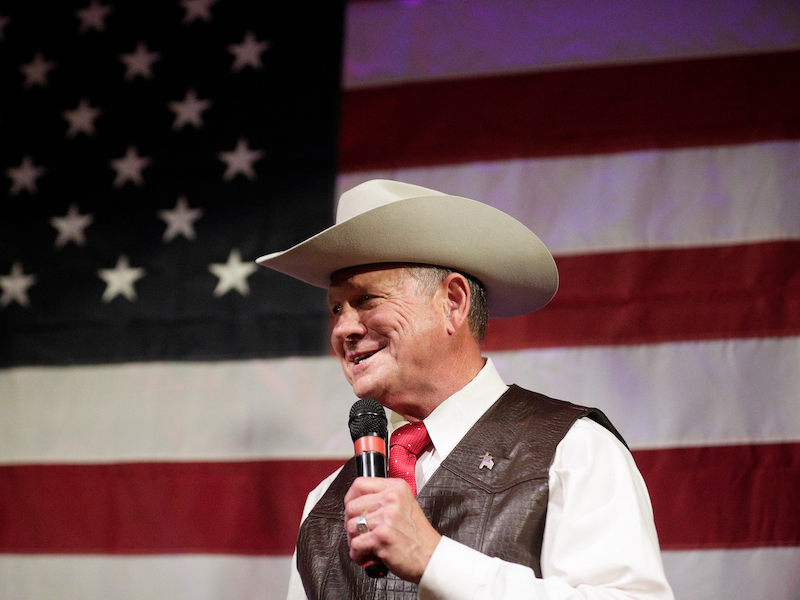 One by one, people are coming forward with their stories of sexual harassment and assault by powerful men: Harvey Weinstein, Kevin Spacey, Dustin Hoffman, Louis C.K., etc. The stories break my heart, and I can’t look at onetime favorites the same way ever again. The latest sexual assault story involves former Alabama judge and current GOP senate candidate Roy Moore. According to reports, four women claim Moore “made sexual or romantic overtures to them when they were teenagers and he was in his 30s.” I have mixed feelings about this. On one hand, I feel absolute disgust towards Moore and empathy towards the alleged victims. On the other, watching Moore’s political career burst into flames is fun.

Moore is infamous for both his election and removal from the Alabama Supreme Court twice. The first time was when he put a Ten Commandments monument in the Alabama Judicial Building. After a federal judge ruled that the monument violated the Establishment Clause, Moore refused to take it down, so they removed him from the bench. He was elected again in 2012, but met with another lawsuit when he said Alabama should ignore the U.S. Supreme Court’s 2015 Obergefell v. Hodges ruling and forbid same-sex couples from marrying. He was suspended for the rest of his term, but too old for re-election in 2018, he retired from his legal career this year to run for senate.

To say that Moore is a conservative evangelical Christian is like saying Fat Bastard from the Austin Powers movies is a bit overweight. He compares homosexuality to bestiality, believes 9/11 was punishment for the U.S. turning away from God, thinks “transgenders [sic] don’t have rights,” wrote in 2006 that Keith Ellison’s Muslim faith should disqualify him from being a congressman, and wrote a poem about “babies piled in dumpsters.” It doesn’t help that he jumped on the Obama birther conspiracy theory bandwagon in 2008, and that he lied about being paid $180,000 a year to work part-time at the Foundation for Moral Law. So much for “Thou shalt not bear false witness.”

Despite all the red flags, though, poll numbers last month revealed Moore was in the lead in the Alabama Senate race by 17 percent. That might change, however, with the recent reports that, like many far-right Christian extremists, he might be a sexual predator. Many of his fellow far-right Christians are making excuses for his behavior, including Alabama State Auditor Jim Ziegler, who recently told the Washington Examiner, “Mary was a teenager and Joseph was an adult carpenter. They became parents of Jesus.”

Fortunately, there are already some repercussions of these accusations. For starters, new poll numbers show Democrat Doug Jones is currently ahead of Moore by four percent. Second, three Republican senators—Bill Cassidy (LA), Steve Daines (MT), and Mike Lee (UT)—dropped their endorsements for Moore. Third, five companies have pulled their advertisements from Sean Hannity’s show after the pundit said he was giving Moore the benefit of the doubt. Even the Republican governor of my home state of Maryland, Larry Hogan, recently called for Moore’s resignation. (No word yet from my congressional representative and Freedom Caucus member Andy Harris, who previously endorsed Moore.)

However, just remember “Grab ‘em by the pussy” didn’t cost Donald Trump the election. Also, conservative Christians have a tendency to say, “God has forgiven him” whenever one of their stars gets caught with their pants down (except Bill Clinton, who’s apparently still going to Hell for Monica Lewinsky), so this may not be the end of Moore’s political career. We’ll just have to wait and see. In the meantime, the anxiety and anticipation makes this atheist want to pray that Alabama voters do the right thing.