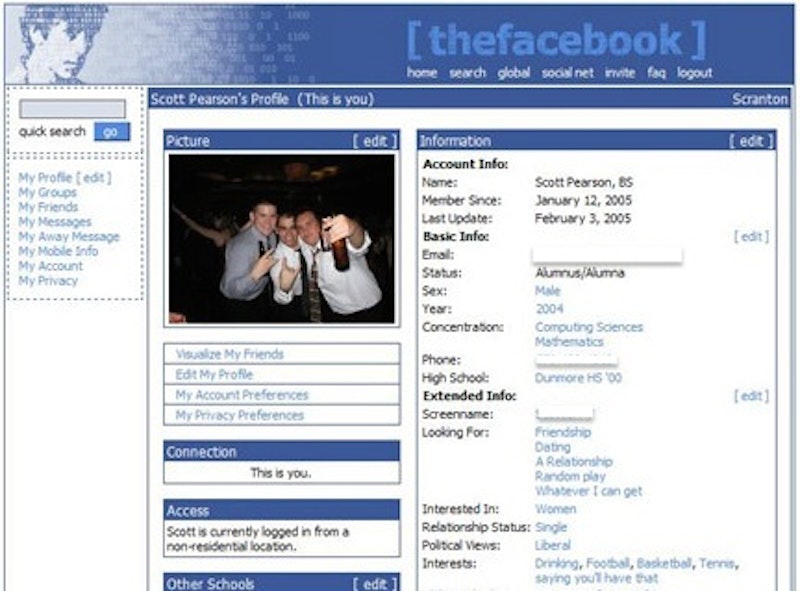 For reasons that may never become clear to me, Facebook pages like “Pantsuit Nation” get six-figure book deals and Twitter accounts like @dasharez0ne launch megabucks projects on Kickstarter. But so be it—getting paid and published is all that really matters in this stupid world of ours.

So it was in the spirit of getting paid and published that I searched my Facebook feed for the sort of great writing that warrants a wider audience. What I discovered was a series of statuses that, when divorced from whatever limited context they once possessed, rival any so-called “outsider art” produced by the likes of Henry Darger or Grandma Moses. Don’t believe me? The proof of the pudding is in the eating, friends!

1. I’m goin to the bar tonight and do a science expirement. Cause if my hypothises is right. Then women can sit there and be like uknow ashton is kind of right. Cause its gonna be me vs a taller skinny guy. And to see who she chooses and I’m the nice guy vs a total ahole. Cause if my hypothesis is right the guy will get chosed more then me.

2. Fml I regret alote but not one thing.

3. Wow, I didn’t know if u dreamed about muffins. That u would start smelling muffins.

4. some people runnin those dick suckers need to keep my name out their mouth haters man.

5. so funny story i got a phone last night then today at work i set it on the counter in the batroom and i forgot it then a couple mins later i went back to get it and somebody stole it to who ever stole my phone i hope you choke on your spit when you are asleep anger with life right now.

7. im always right even if im wrong i could of been right so there for im always right life leason learned always go with your first feeling if it feels wrong its wrong.

9. oh yeah chili and cinnamon rolls for supper the bomb

11. I JUST WANNA SAY THIS THERE IS NO SOLIDER IN THIS WORLD THAT CALL THEIR FELLOW SOLIDER THERE BROTHERS, TO ANOTHER SOLIDER. EX SPECIALLY IF THEY WERE IN COMBAT TOGETHER. DUMBASS.

12. Can Anyone help me finish me fridge its completely full of beer and I have No one to drink with.

13. I LOVE READING FACEBOOK STATUS ABOUT HOW SOME GUYS COMPLAIN ABOUT BEING LONELY. I SEE A MILD CONTRADICTION IN THEM.

14. NEW FLASH: THE ONLY REASON ALL THOSE GUYS TOLD YOU WERE PRETTY IS BECAUSE THEY WANTED TO HAVE SEX WITH YOU. YOUR JUST AN UGLY SLUT, AND IT SAD THAT YOU BELIVE YOUR BETTER THAN ANYONE.

15. Don’t leave, cause your my oxygen with out you I won’t breathe.

18. A: Huh… I need to think about doing that myself… only it’d be just slightly different from the other two that I’ve seen… *smirks*
B: Penny for your thoughts?
A: Cosplay of Joe with a Captain Marvelous jacket
B: Ahh, ok. Sorry for the slow response, got busy the last few days.
(THE END)

19. And THAT’S what I get for not watching the entire season of Red vs. Blue season 9. *headwalling*

20. Crowning is about to begin! — with MY BABYGIRL and 2 others at Bay City Cuties Pageant.

21. Big decision every morning; what color of flannel to go with?

22. If life sucks dingaling why does mine. Unfair.